Failure of mooring systems is a persistent problem for floating offshore facilities such as floating production, storage and offloading (FPSO) vessels. On average, about two incidents of permanent mooring systems failing were reported annually between 2000 and 2013, according to various analysts.1,2,3 One of these studies found that nearly half of such incidents reported over a decade involved failures of multiple mooring lines. Another estimated that 150 mooring lines were repaired or replaced in the period cited above.

For example, the Gryphon Alpha FPSO vessel came off station in a storm in the UK North Sea in 2011 when four of its 10 mooring lines parted.4 This reportedly cost an estimated USD1.8 billion to reinstate, and another USD300 million later that year when five of 10 lines parted and the vessel again came off station.1

The consequences of mooring system failure can be dangerous and costly. In the severest cases, vessels have drifted and risers connecting floating structures to subsea systems have ruptured. Such incidents have resulted in extended field shutdowns and raised risk to life, property, and the environment. Despite this, no formally published study has yet quantified both the likelihood of failure and its consequences at specific points along a mooring line.

Traditional ways of detecting and predicting mooring line failure have limitations
Traditional methods of failure detection rely on either a ‘watch circle’ approach or the measurement of mooring line tension.

In essence, the watch circle method establishes a ring inside of which the vessel is assumed to operate with all mooring lines intact. However, this approach lacks accuracy and reliability and is not very practical in operational use. Physical tension sensors on mooring lines are expensive and problematic to maintain. Field experience suggests that they are prone to failure within a few years of installation. 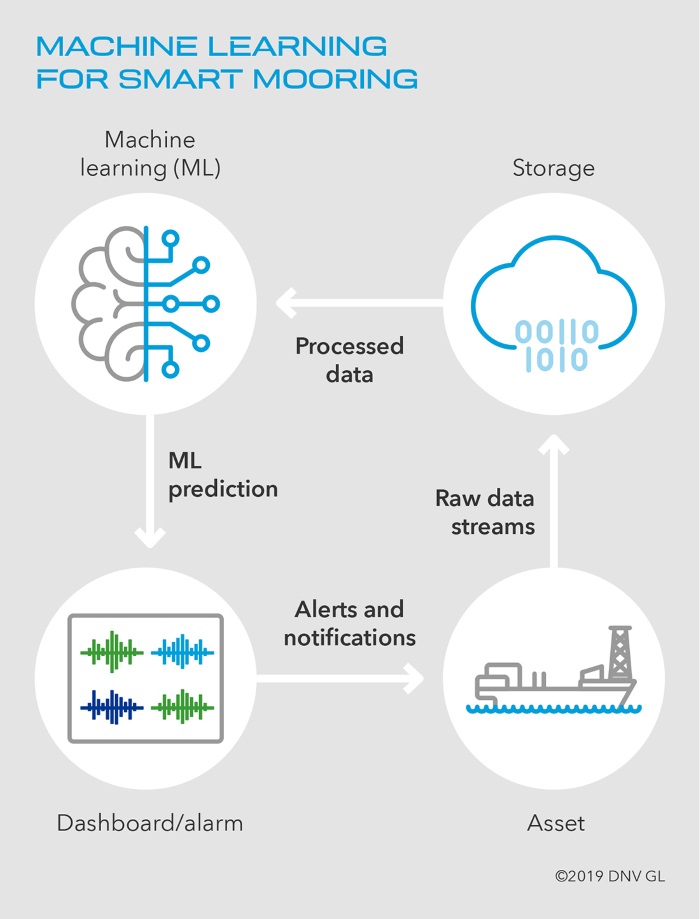 An approach based on machine learning has advantages
Given the considerations described, there is a need for a robust method. One approach is suggested by recent advances in machine learning, which are igniting interest in intelligent digital methods for anomaly detection, structural integrity assessment, and virtual sensors.5,6

DNV GL specialists in Houston, US, have applied such methods to ‘train’ machine-learning models to accurately identify mooring line condition.7 The result is Smart Mooring, the company’s novel alternative method using machine learning (Figure 1). It uses the floating vessel’s GPS and six degrees-of-freedom acceleration data to detect the condition of the mooring system in near real-time.

“Our tests show that, for determining when a mooring line has failed, this advanced solution is more accurate and cost effective than physical tension sensors that detect anomalies,” said Frank Ketelaars, regional manager, the Americas, DNV GL – Oil & Gas.

To test the concept, DNV GL performed a desktop study of a turret-moored FPSO vessel in water about 250 metres deep. The company’s experts performed numerical modelling of the FPSO vessel and the turret mooring on hydrodynamic analysis software. In this model, 21 mooring lines made of chain-wire-chain segments were attached to a non-disconnectable turret integrated into the vessel and permanently fixed to the seabed by a mooring system. The project examined the Smart Mooring system’s performance to detect mooring line failure in near-real time.

A large number of simulations were performed based on some 2,900 load cases and a year of varying environmental conditions. This created a dataset of vessel offsets and motion for both intact and ‘single mooring line damaged’ cases, which was then used for training the machine-learning model.

Machine learning proves its power for identifying condition of mooring lines
The model’s performance was checked against approximately 4,000 different test datasets. In more than 99% of the cases tested, the machine-learning algorithm accurately identified the condition of the mooring lines.

“These excellent results show our solution can accurately identify when a mooring line is intact or damaged. Our conservative estimate is that this approach costs half as much as installing a mooring line tension-monitoring system for a brownfield operation,” said Vivek Jaiswal, senior engineer, DNV GL – Oil & Gas.

The current study was based on simulated data developed using numerical models. In future work, such models could be trained and tested using data from an existing vessel. Multiple pilot studies are already underway on other offshore floating vessel types and a commercial solution is expected to be offered in 2020.

2019-07-16
hellenicshippingnews..
Previous: Nippon Paint Marine Reflects On Ship Coatings
Next: Become the master of your own analysis