Hamburg-based global container line Hapag-Lloyd has recently announced new reefer bookings of 11,100 units and awarded Maersk Container Industry (MCI) a huge order totalling 8,600 units, of which 2,000 will be Controlled Atmosphere (CA) reefers. The company has already commenced production of the 8,600 Star Cool Integrated™ reefers at their Qingdao site in China.

All 8,600 reefers are ready to switch over to R513A, a low Global Warming Potential (GWP) R513A refrigerant blend introduced to Hapag-Lloyd last year in 1,000 Star Cool units. The alternative refrigerant offers a 56% GWP reduction. The operational experience gained so far by Hapag-Lloyd with the environmentally friendly refrigerants has been ‘eventless’ and without any obstacles. The use of the R513A refrigerant with Star Cool addresses the environmental protection legislation for existing technology platforms introduced under the EU’s F-gas regulations. 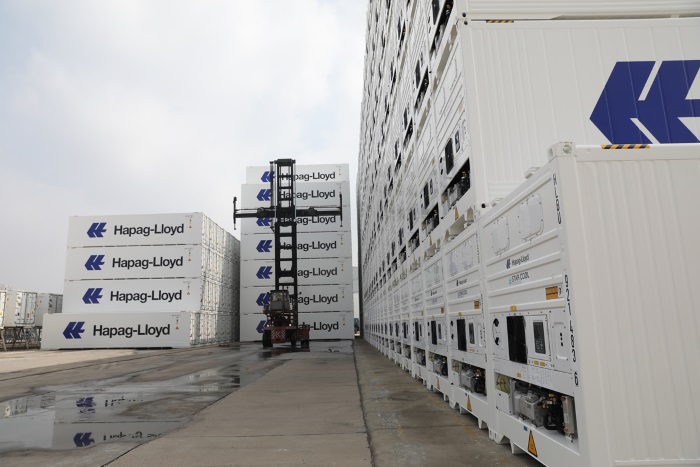 “It is reassuring to know that we have the ability to fully convert a large part of our reefer fleet to a lower GWP refrigerant solution, without having to make any modifications to the machines or compromise on performance,” commented Niklas Ohling, Senior Director at Hapag-Lloyd.

“We deeply value the trust shown in us by Hapag-Lloyd, which is founded on 18 years of experience in supplying reefer containers to them. This close cooperation led Hapag-Lloyd to order their first batch of Star Cool units in 2012, since when the proportion of these cutting-edge reefers in the Hapag-Lloyd fleet has steadily grown over the years. The 8,600-reefer order from Hapag-Lloyd obviously marks a further milestone for MCI and Star Cool,” said Søren Leth Johannsen, Chief Commercial Officer at MCI.

The successful launch of Hapag-Lloyd’s ExtraFresh and ExtraFresh Plus services has led to further expansion of the CA technology for 2,000 Star Cool Integrated containers. This brings the total number of Star Cool CA systems up to 5,000 machines within Hapag-Lloyd’s growing ExtraFresh fleet.

The energy efficiency of Star Cool can now be proved in real time thanks to the built-in energy meter, which is a first in this industry. “Our aim is to cut Hapag-Lloyd’s total carbon footprint by a further 20% by 2020 and efficient reefer containers will play a significant role in achieving this goal,” Niklas Ohling concluded.
Source: Maersk Container Industry