Make room for LPG as a marine fuel

In the race to take first place in the competition for shipping’s best alternative to high sulphur fuel oil, much has been made of the advantages of liquefied natural gas (LNG).

Rather less noise has, however, been made about its heavier cousin, liquefied petroleum gas (LPG). But it looks like that imbalance is set to be redressed.

LPG is readily available globally and is lauded as a clean, energy efficient and portable fuel with an affordable price tag. It’s currently sourced mainly from natural gas and oil production activities. However, in the wake of new technologies and techniques, LPG can also be produced from renewable sources.

As a mixture of propane and butane its density is higher than that of air, which means that in the event of leakage vapours will accumulate in the lower portion of the surrounding space. That means that it requires a different approach to leak detection and ventilation than LNG. LPG also has a lower flammability range, with a lower explosion limit of 2%.

On the upside, LPG is less challenging with regard to temperatures since it has a higher boiling point and, unlike LNG, is not stored at cryogenic temperatures.

The World LPG Association (WLPGA) is clear on LPG’s growing applicability to shipping. Its recent ‘LPG Bunkering – Guide for LPG Marine Fuel Supply’ report found that LPG is a key enabler for IMO’s 2050 regulation which calls for a reduction in total annual greenhouse gas emissions by at least 50% by 2050 compared with 2008. 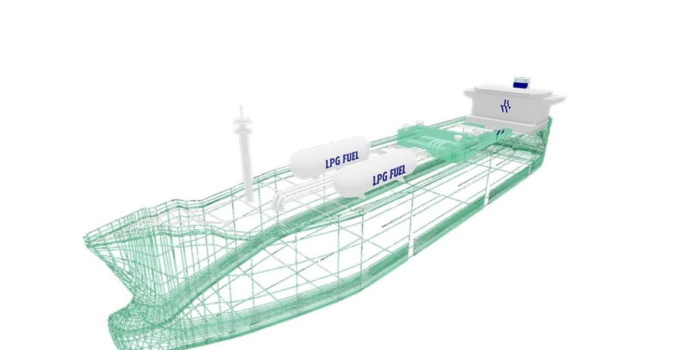 BW has put its weight behind LPG-fuelled ships

LPG is already becoming the preferred fuelling solution for LPG carriers. For other ships, a rethink is called for on design, regulations, safeguards and safe practices, and operational processes and training to make LPG viable as a marine fuel. But taking all that into consideration, there is said to be great potential for the product in the shipping industry.

“With the marine industry under pressure to take measures to reduce emissions to comply with IMO 2020, LPG can make significant inroads into the marine fuel market,” said the WLPGA. To achieve that, LPG propulsion, starting with the LPG carrier sector, needs to move beyond a niche fuel option, to gain the acceptance in the wider shipping sector that it deserves.

Progression could be fast-tracked by the fact that infrastructure for distribution and bunkering is already largely available to serve potential marine market demand; other alternative fuels need infrastructure to be developed.

While LPG might be a relatively new marine propulsion fuel, it is a fuel that the shipping sector knows well through its more than 50 years of storage, transport and handling experience.

“Supplies are also abundant, especially due to increased production coming from the US,” said the Association. “LPG bunkering can take place in various ways, from terminals, refineries, on-shore trucks, smaller LPG carriers or barges. There are more than 1,000 LPG storage facilities around the world that can be used for LPG bunkering, and more than 700 small size LPG carriers, that can be used for ship-to-ship bunkering.

The WLPGA expects greater economic incentives to be offered in the future to attract more ship owners and operators to invest in LPG fuelled fleets.

Henry Cubbon, president of WLPGA, said: “As a vision, I want to see LPG positioned as a relevant fuel for the future with a recognised role in the decarbonisation of our planet. The key challenge is the drive to decarbonise our planet and how we position LPG as part of the solution and not the problem.

“Our opportunity is the fact that LPG is a decarboniser. Across many parts of the world LPG has replaced biomass as a source of cooking fuel leading to significant health benefits. LPG has also replaced other fuels such as heating oil in residential properties and other fuels used by businesses and agricultural enterprises.”

DNV GL shares the WLPGA’s enthusiasm for LPG as a ship’s fuel. It has developed new class rules and a class notation for “Gas fuelled LPG” ships in anticipation of growing industry interest. Currently, there are no international rules for LPG as a fuel.

“With the new rules and class notation, we want to offer owners interested in LPG a straightforward path towards compliance with the alternative design approach mandated by the IGF Code,” said Geir Dugstad, director of ship classification and technical director at DNV GL – Maritime. “As the fuel environment within the maritime industry becomes more diverse, it is essential that we continue to broaden the enabling rules and regulation to support these new choices.”

The rules and notation are based on DNV GL’s rules for ships using LNG as fuel but account for the differences in properties and phases between LPG and LNG. The ‘Gas fuelled LPG’ notation covers internal combustion engines, boilers and gas turbines for both gas-only and dual-fuel operations. It also includes requirements for a ship’s fuel supply, considering all aspects of the installation from the bunkering connection up to and including the LPG consumers (main and auxiliary engines, boilers, etc.).

LPG promises lower emissions, both in terms of greenhouse gases and other pollutants. It virtually eliminates sulphur emissions and reduces GHG output by approximately 17% compared with burning HFO or MGO. DNV GL adds that LPG could also act as a bridging fuel to ammonia, as the materials used for LPG tanks and systems are, in most cases, suitable for ammonia.

One shipper has taken the leap and opted for LPG-fuelled ships: BW LNG is retrofitting four of its fleet to enable them to burn LPG as part of their fuel mix. While BW LPG has been burning LNG boil-off for fuel for decades, LPG carriers have been re-liquefying the boil-off and returning it to the cargo. However today there is a case greater use of LPG as a fuel because of economic and industrial developments.

Indeed, declining LPG prices due to shale gas production, and increasingly stringent environmental regulations means that LPG is coming into its own.

Pontus Berg, executive vice president technical and operations at BW LPG, said: “As a company, BW LPG is also looking for ways to reduce our carbon footprint, which LPG as a fuel offers. Burning of LPG in our retrofitted ships also reduces the numbers for PM, NOx, SOx and CO2, which allows us as a company to play our part for future generations.”
Source: Baltic Exchange