Making LPG fuel an option for the shipping industry

“A joint study of DNV GL and MAN evaluated that liquefied petroleum gas (LPG) is at least as attractive an energy source as liquefied natural gas (LNG), with shorter payback periods, lower investment costs and lower sensitivity to fuel price scenarios. Furthermore, there is considerable LPG infrastructure available around the world, including storage facilities, export terminals and coastal refineries with loading and unloading installations”, Torill Grimstad Osberg, Head of Section LNG, Cargo Handling & Piping Systems at DNV GL summarizes some of the advantages of LPG as fuel.

Using LPG as a fuel can lower emissions to air compared to conventional fuels, both in terms of greenhouse gas emissions and other pollutants. “The use of LPG virtually eliminates sulphur emissions and can help comply with local and global sulphur restrictions. The reduction of NOX emissions depends on the engine technology used. In the case of a two-stroke diesel engine, the NOX emissions can be expected to be reduced by 10–20 per cent compared to HFO, whereas the expected reduction for a four-stroke Otto cycle engine is larger and may actually meet Tier III NOX standards,” Osberg adds. “The use of LPG as a fuel will to a large degree avoid particulate matter and black carbon emissions. What is more, the combination of low production and combustion-related emissions results in an overall greenhouse gas emissions reduction of 17 per cent compared to HFO or MGO.”

When the International Code of Safety for Ships Using Gases or Other Low-Flashpoint Fuels (IGF Code) entered into force in January 2017, it only contained detailed requirements for ships using natural gas as fuel. Other gases and low-flashpoint fuels are subject to the “alternative design approach”, which means that they may be used if it can be shown to the satisfaction of the administration that the arrangement fulfils a number of functional requirements. The safety, reliability and dependability of the systems must be equivalent to those achieved by new and comparable conventional oil-fuelled main and auxiliary machinery.

A risk-based design approach as mandated by the IGF Code can be a time-consuming process with potentially higher business risk than the prescriptive, experience-based rules the maritime industry is used to working with, and may impede implementation of such fuels. 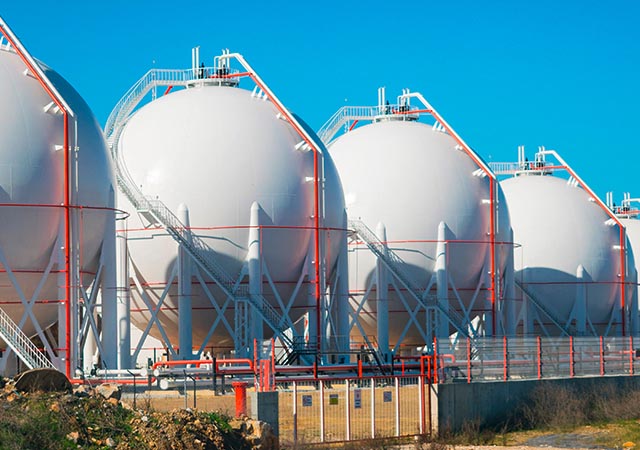 The new DNV GL rules for ships using LPG as fuel which were published in July 2019 (class notation Gas fuelled LPG) are based on the rules for ships using LNG as fuel but account for the differences in properties and phases between LPG and LNG. LPG is a mixture of propane and butane. Its density is higher than that of air, which means that in the event of leakage vapours will accumulate in the lower portion of the surrounding space. By contrast, natural gas boiling off LNG is lighter than air. Therefore LPG requires a different approach to leak detection and ventilation than LNG.

Furthermore, LPG has a lower flammability range, with a lower explosion limit of two per cent. On the other hand, LPG is less challenging with regard to temperatures since it has a higher boiling point and, unlike LNG, is not stored at cryogenic temperatures.

The class notation Gas fuelled LPG applies to installations using LPG as fuel in ships. This includes internal combustion engines, boilers and gas turbines, whether running on gas only or on dual fuels. “The scope of the class notation Gas fuelled LPG includes requirements for the ship’s fuel supply, covering all aspects of the installation from the bunkering connection up to and including the LPG consumers,” Osberg says. “Applying the prescriptive requirements in the DNV GL rules for LPG as fuel may simplify the alternative design approach mandated by the IGF Code if so agreed by the Flag Administration.”

Looking to the future, there is great interest in zero-emission fuel solutions. Pure hydrogen is an obvious possibility in this context, but it comes with storage and safety challenges. Therefore there is continued interest in investigating other hydrogen carriers, such as ammonia. “LPG could act as a bridging fuel to ammonia since LPG installations in a ship may be suitable for ammonia, as well, Christos Chryssakis, Business Development Manager at DNV GL concludes. “Materials used for LPG tanks and systems will in most cases be suitable for ammonia, and the double barriers and other safety features required for LPG would be just as relevant for ammonia. Some adjustments may be necessary for an LPG-fuelled ship to convert to ammonia but may be limited in scope in many cases.” By making appropriate arrangements when planning a newbuilding project, the need for adjustments when converting to ammonia at a later time could be minimized.
Source: DNV GL, Maritime Impact (https://www.dnvgl.com/expert-story/maritime-impact/Making-LPG-fuel-an-option-for-the-shipping-industry.html)

Previous: Beware the perfect storm when complying with Sulphur 2020 regs
Next: Ship Owners Return in the Dry Bulk Market