When President Donald J. Trump and General Secretary Xi Jinping meet to discuss trade next month, liquefied natural gas (LNG) will be front and center of their discussion. America’s leading LNG exporter Cheniere is in talks to sign a 20 year, $16-$18 billion-dollar supply agreement with China Petroleum & Chemical Corp, also known as Sinopec. If the deal materializes – and by all accounts, it will – it would mark the third such long-term contract signed since Cheniere opened its Beijing office in 2017. The growing business relationship between the two bodes well for the future of U.S.–China energy relations, despite the turbulent state of bilateral trade policy and overall great power competition today.

The synergy is there: it seems that no trade war is strong enough to drive a wedge between the world’s fastest growing LNG exporter and the world’s fasting growing LNG importer. The United States is expected to see its foreign sales of seaborne natural gas jump from its current 3.6 billion cubic feet per day (bcf/d) to 8.9 bcf/d by 2020.

And for its part, China’s LNG imports grew a staggering 41% between 2017 and 2018, making it the second biggest consumer of LNG just behind Japan. China is expected to surpass the imports of its gas-hungry island neighbor by 2023. 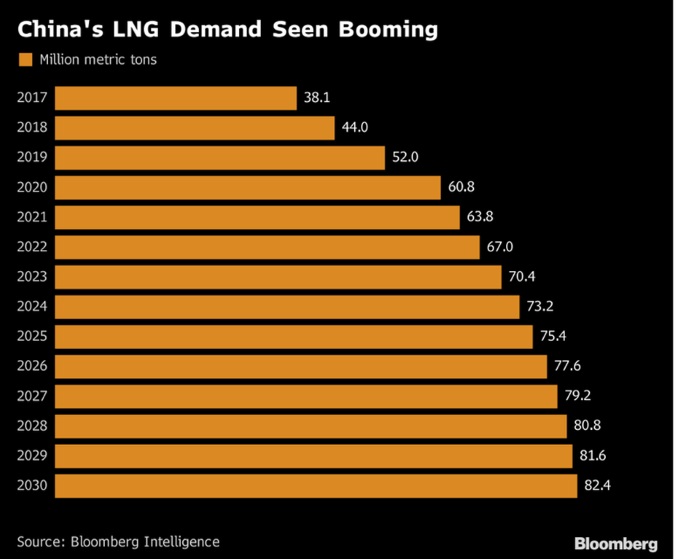 Cheniere Energy Inc. (NYSE:LNG) and Sinopec (NYSE:SNP) are likely to solidify the impressive LNG supply agreement as part of a broader U.S. trade deal with China. Part and parcel of the deal, Sinopec will buy an estimated 2 million tons of gas per year (mtpa) – or .25 bcf/d – from Cheniere beginning in 2023. Chinese banks have also agreed to finance expansion of Cheniere facilities – helping to put its sixth LNG train at its Sabine Pass facility in service.

Cheniere’s meteoric rise put U.S. on the global LNG map. It was the first company to export LNG from the United States in 2016 and now supplies more than 30 different nations. It has been leading the industry ever since with nearly $471 million in profits in 2018, dwarfing that of U.S. competitors. The Houston-based company was the first to sign a long-term contract with China National Petroleum Corporation (CNPC) in February of 2018, giving it a first-mover-advantage among a burgeoning group of U.S. LNG exporters.

This potential contract is a huge win for Cheniere and the company’s future business operations with China. Cheniere views The People’s Republic as an important long-term export market for LNG, and rightly so. In a recent interview, Cheniere CEO Jack Fusco reiterated that “China, as we’ve talked about, has been a real focal point for the company. We are dedicated to that market.” This commitment – given the current trade war – sends a positive message to other U.S. producers looking to enter into agreements with the Chinese economy, which is currently undergoing a massive “fuel-switch” policy away from coal to gas and other power sources.

More than that, the agreement provides what all large LNG suppliers ultimately want – financing. The deal, once approved, will provide banks with the documentation they need to give Cheniere critical financial guarantees, which can immediately be put towards infrastructure investment – and getting their commodity produced. Once signed, even a complete breakdown in the agreement (perhaps due to a collapse in future U.S. – Sino trade relations) might not negatively impact Cheniere’s books. In fact, LNG bound for Sinopec refineries would just be resold on increasingly liquid spot markets, perhaps netting Cheniere even greater returns. If this agreement goes through, Cheniere cannot lose.

Other U.S. gas suppliers have not been so lucky vis-à-vis China. LNG players like Tellurian and Sempra, unable to land massive long term contracts of their own, are still reeling from the 10% tariffs implemented against U.S. LNG by Beijing in September of 2018.

During the second half of last year, six cargoes filled with U.S. LNG were sent to China – a 25% decrease compared to the same period in 2017. Additionally, many LNG facilities waiting for approval by U.S. regulators are struggling to meet their final investment decisions (FID), as trade tensions have squeezed critical investments tied to long-term contracts.

The conclusion of the U.S.-China trade war is anything but certain. Complications still exist in determining appropriate enforcement measures within the deal that both sides can agree to. Exact dates for the summit have not yet been set. And Chinese officials are cautious of a face-to-face between the two leaders given Trump’s propensity to walk away from a deal he doesn’t like, as he demonstrated in Hanoi scuttling the summit with North Korea’s dictator Kim Jong Un.

Still, the Cheniere-Sinopec deal is a reason for optimism in this otherwise tumultuous time for U.S. – China relations. If the end of the trade war is in sight, it may be energy that finally brings us there.
Source: Forbes