One of the biggest debates around the future of shipping is what role, if any, unmanned vessels will play. The journey may turn out to be more important than the destination: the pursuit of vessel autonomy is already leading to smarter systems that can enhance safety, cost-efficiency, and environmental performance even on today’s vessels. Simulation technology is playing a key role in their development.

“We have a vision of a more efficient, more connected, smart marine ecosystem,” says Neil Bennett, Global Director of Simulation at Wärtsilä Voyage. “Being part of the development of autonomous shipping is fundamental to shaping that future.”

Simulation is integral to developing autonomous systems. The computer models that underpin simulation-based training – capable of replicating almost infinite permutations of marine environments, vessel traffic situations, and ship equipment – are the same that are used to inform the decision-making capabilities of intelligent systems. Deployed in real time with real people in simulators, those same models can be used to test and validate the human-machine interface and, eventually, to teach the crew how to use those systems.

Three projects at Solent University, Southampton in the UK highlight the diverse roles that simulation plays. The university’s research staff in the Warsash School of Maritime Science and Engineering recently participated in the MAXCMAS project – a GBP 1.4 mn, two-year project in which autonomous vessels were programmed to obey maritime regulations for the avoidance of collisions. The project tested the algorithms it had developed by modelling scenarios using simulation before a live trial was conducted onboard an autonomous minesweeping vessel in Weymouth Bay.

Preparing vessels to obey regulations written with human seafarers in mind is not a simple task, explains Terry Mills, Senior Simulation Technician at Solent University, Southampton. “The regulations are well written, but are always open to interpretation. And the interpreter is a human. A machine sees rules in black and white, so we had to build in seamanship. We ended up with a set of algorithms and an interface that could be retrofitted to any size of ship.”

A much larger project was the Europe-wide, EUR 43 mn, Sea Traffic Management initiative. Ten simulator training centres – the European Maritime Simulator Network – worked together with the goal of understanding and then facilitating the kind of data exchange that will be crucial for safely operating autonomous vessels.

Wärtsilä, as a simulation provider, took part in this project, which Mills describes as an attempt to establish “air traffic control at sea.” One key goal was understanding the data sharing needed between ports, vessels, and other stakeholders – such as ship service providers and onward logistics companies – to enable “just-in-time” sailing.

Three hundred vessels were fitted with tools to collect and transfer data. Studying interactions between these vessels provided important insights into how sea traffic could be better managed to optimise vessel voyages and port calls – reducing fuel cost and emissions. But even with so many vessels participating, the number of times ships would meet each other physically would have been rather limited. With the help of the simulator network, they met virtually, giving researchers the opportunity to collect more data faster. 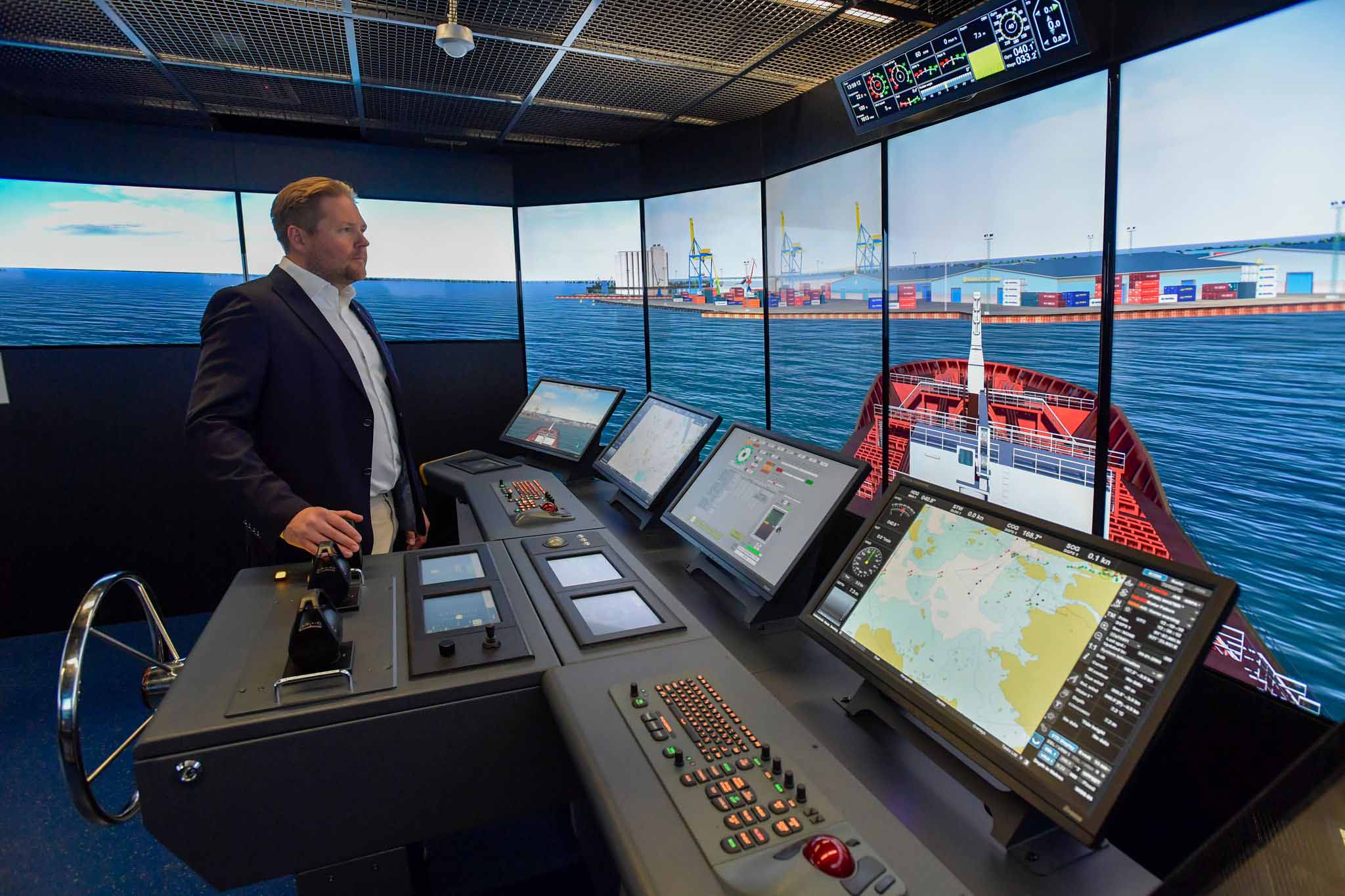 A new potential project builds on Solent’s strong previous experience in remote and autonomous ship systems. The university is bidding for funding to extend its investigations into training seafarers in remote operations. The project aims to link Warsash’s simulation centre with one of the scale models it currently uses for ship handling training at a dedicated facility, Timsbury Lake. By using a simulator programmed with a scale model of the vessel and the lake area to control a real vessel, the project will provide a more realistic training experience for remote seafarers.

“One of the biggest barriers to training for remote operations is the capacity to test on full-scale ships,” says Mills. “Using a real vessel would be expensive and dangerous if something went wrong. Simulations are great for learning pilot skills, but cannot provide that jeopardy.”

The risk of putting a dent in one of the scale models on Timsbury Lake will provide that dose of realism. The fact that students will be operating manned models the same area will also allow researchers to study the interaction between remotely operated vessels and manned craft.

To assist in autonomous and advanced navigation projects such as these, Wärtsilä has created an open approach that makes it simpler for universities and research institutions to deploy its simulation technologies. While Wärtsilä often provides the hardware for such projects – including 3D screens and control units reproducing bridges – it is the software that is more critical. This includes the operating platform as well as models of sea areas and ship systems that can then be used in simulator rooms or fed into computers as needed.

One example is the Intelligent Shipping Technology Test Laboratory (ISTLAB) at the Satakunta University of Applied Sciences (SAMK) in Rauma, Finland. The lab, among the first of its kind, is designed as a testing environment for remotely controlled, autonomous vessels. Wärtsilä recently delivered a navigation simulator and specific mathematical models for the project. They will be used to carry out simulated testing of remote-controlled vessels that the organisers hope will culminate in a real-world case study.

The smart tug of tomorrow

The benefits of early-stage simulation testing are already being seen in one real-life application – the IntelliTug project, a collaboration between Wärtsilä and Singapore’s leading harbour and terminal towage operator, PSA Marine. The project aims to develop the smart tug of the future by retrofitting Wärtsilä’s smart navigation system on PSA Marine’s harbour tug, PSA Polaris. Through the simulator, the team tested the integration of cutting-edge technologies deployed – including collision avoidance software and system usability – with feedbacks from PSA Marine’s tug masters. The success of the simulations boosted the project team’s confidence to proceed with the next stage of the testing. In March 2020, Wärtsilä and PSA Marine successfully completed initial sea trials for the IntelliTug project.

The smart navigation system, comprised of Wärtsilä’s Dynamic Positioning system, a sensor suite and a newly developed sensor fusion engine, allows the tug master to carry out passage planning while maintaining safe distances from other vessels during autonomous navigation. The IntelliTug project enhances the tug masters’ capabilities through heightened situational awareness and eases the task of addressing other complex demands they may face.

Alexander Ozersky, Deputy General Manager of Intelligent Systems, Wärtsilä Voyage, explains: “Every system separately was complex, and once you connect them it was going to be even more challenging. We took the decision to try and debug all the pieces in the simulation using the actual control and a mathematical model of the engine. From an engineering perspective, we saved a huge amount of time, making quick mistakes as cheaply and as safely as possible.”

Testing the integration of systems on an autonomous vessel is one thing; providing the systems involved with the intelligence to make decisions in complex marine environments is another challenge entirely. Here, the capability to simulate scenarios is just one building block. Another necessary foundation is the ability for systems to learn from experience.

It is a challenge that Wärtsilä has already addressed in its Advanced Intelligent Manoeuvring (AIM) function, part of its package of artificial intelligence tools. AIM is a track prediction system and anti-collision support tool designed to improve situational awareness and reduce the probability of officer inattention or poor judgement leading to an incident. It anticipates that vessels will move in compliance with collision regulations, but also needs to account for how humans interpret those regulations in various situations.

“Interpretation depends on context,” says Ozersky. “The acceptable distance between vessels is one example. Less than one mile would be unusual in open water but very normal in a harbour.”

The artificial intelligence for AIM and other products – including Wärtsilä’s Vessel Traffic Services for managing traffic in ports – needs to absorb the habits of local traffic and refine its simulations based on its observation of how vessels actually move. So far, the system has collected data on traffic movements at several ports. With each new set of data, the simulations become more realistic.

This combination of simulation and machine learning will be critical in controlling autonomous vessels. It is already available in decision-support software today and is being trialled in autonomous navigation systems. Before it is let loose on a wider scale, there are many problems to be solved. Among these are the ways in which autonomous vessels interact with other automated systems that do not follow similar protocols – let alone the even less predictable ways in which manned craft may respond to autonomous ships.

Neil Bennett concludes: “Our simulation technologies are providing researchers with a platform to run these studies, and we are constantly being challenged by the need to advance our technology further. We can already do a lot with the technologies we have, and we are evolving products to meet the needs of future autonomous vessel systems.”
Source: Wärtsilä (https://www.wartsila.com/twentyfour7/innovation/making-ship-systems-smarter-with-simulation)