Maritime transport is the backbone of global trade. However, it harms the environment by releasing around 940 million tonnes of CO2 into the atmosphere each year. A factor that contributes to the maritime transport sector’s greenhouse gas emissions is biofouling – the build-up of microorganisms, algae, plants or small marine animals on the submerged hull of the ship.

When biofouling occurs on a ship’s hull, it increases drag that can lead to a loss of ship speed or increased fuel consumption (and hence higher emissions) to maintain the speed. A biofouling layer as thin as 0.5 mm that covers only half of the hull can cause emissions to increase by as much as 25 %, a figure that can rise to 55 % under more severe conditions, such as a light layer of barnacles or tubeworms. While there exist many different strategies for reducing either biofouling or drag, the EU-funded AIRCOAT project’s potentially game-changing solution combines both.

AIRCOAT has developed a new foil that creates a passive air layer for ship hulls that makes them more fuel efficient and environmentally friendly. The passive air lubrication technology coats the ship hull with a thin and permanent layer of air when it is submerged in water. This reduces drag, and is also expected to reduce fouling since organisms tend not to settle on layers of air. Additionally, the approach does not make use of toxic substances to decrease biofouling, so harmful chemicals are not released into the water. 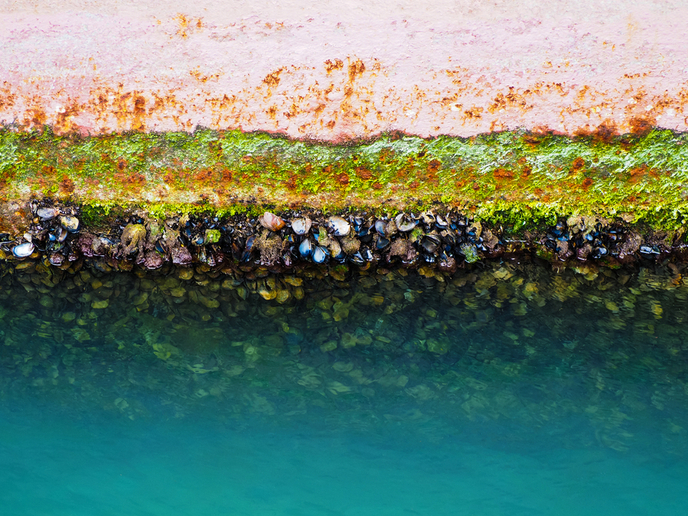 It all began with a fern
The AIRCOAT solution was inspired by Salvinia molesta, a free-floating aquatic fern that forms a permanent layer of air on its surface under water. “It was amazing to understand the mechanism, how the plant keeps a layer of air under water and to produce first artificial air-keeping samples in our lab – which by the way still are keeping the air layer even after years under water,” notes Prof. Thomas Schimmel of AIRCOAT project partner Karlsruhe Institute of Technology, Germany, in a press release posted on the ‘Hellenic Shipping News’ website.

The AIRCOAT team presented the final results of 4 years of research at the Oceanology International ocean technology trade show held in London in March 2022. Johannes Oeffner of AIRCOAT project coordinator Fraunhofer Center for Maritime Logistics and Services, Germany, describes the team’s achievements in the press release: “We’ve developed production lines and testing facilities, produced kilometres of foil, coated a research vessel and applied a test patch to a container ship, performed a vast number of calculations and simulations and spent many hours with hydrodynamic and biofouling experiments.” The small research vessel in Malta and the container ship in Romania were used in the two experiments conducted in real maritime environments to gain insight into the production and application of air-retaining surfaces.