Thomas Knudsen said: “The ME-LGIP builds on the success we have had with our ME-GI and ME-LGI dual-fuel engines, which have won over 250 orders since their introduction to the market. Employing essentially the same proven technology, we can now add LPG to the expanding list of non-HFO and alternative fuels that our two-stroke technology can exploit.”

Bjarne Foldager said: “Interest in using LPG as a fuel, within and outside of the LPG carrier segment, is growing due to its sulphur-free character, widespread availability and ease of bunkering. In gas mode, the ME-LGIP engine operates on just 3% pilot oil and down to 10% load. Ultimately, we expect the engine to operate without the need for pilot oil.”

MAN Energy Solutions expects a strong demand for the ME-LGIP engine from very large gas carriers (VLGCs) and coastal vessels from its introduction.

The Diesel principle provides the ME-LGIP engine with high operational stability and efficiency, including during load changes and fuel change-over, while defining properties such as a stable change-over from one fuel type to another with no fuel-penalties are maintained. The negligible gas slip of the ME-LGIP engine makes it the most environmentally friendly, two-stroke technology available.

MAN Energy Solutions also reports that the ME-LGIP engine has experienced an up to 18% reduction in CO2 and circa 90% reduction in particulate matter when running on LPG, compared with HFO.

The development of the ME-LGIP engine to burn LPG is part of the ‘Maritime Energy Transition’, an umbrella term that covers all MAN Energy Solutions activities in regard to supporting a climate-neutral shipping industry.

The term stems from the German expression ‘Energiewende’ and encapsulates MAN Energy Solutions’ call to action to reduce emissions and establish natural gases as the fuels of choice in global shipping. It promotes a global ‘turn to gas’, driven by the IMO, and a common approach by the shipping industry and politics to invest in infrastructure development and retrofits.

Launched in 2016 after COP 21, the initiative has since found broad support within the shipping industry and politics.

MAN Energy Solutions already won the first order for the new engine back in March 2018 when Hanjin Heavy Industries announced that it would construct 2 × VLGCs (Very Large Gas Carriers) in their Philippines Facilities for EXMAR, the Belgian integrated gas shipping company. The 80,000 m3 newbuildings will each be powered by an individual MAN B&W 6G60ME-LGIP Mk9.5 engine.

LPG was chosen as a fuel option for the VLGCs to comply with the new IMO sulphur-emission legislation due to enter force in 2020. Engine delivery to the yard has been scheduled for December 2019 and, upon construction, the carriers will be chartered by Statoil.

The primary characteristics of ME-LGIP engines include:

MAN B&W ME-LGIP engines are designed to be dual-fuelled with diesel fuels and LPG as equal alternatives for operation.

Furthermore, the ME-LGIP engine is flexible with regard to LPG composition and finds even LPG qualities containing significant amounts of ethane acceptable.

The ME-LGI (-Liquid Gas Injection) concept can be applied to all MAN Energy Solutions low-speed engines from 50-bore and up, either ordered as an original unit or through retrofitting. 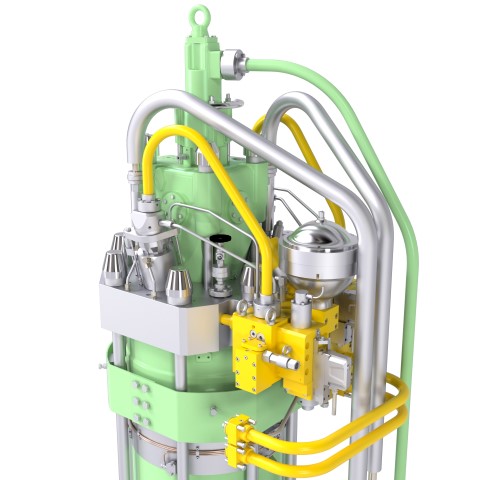 With the ME-LGIP engine, LPG joins the list of liquid, environmentally-friendly fuels that can power MAN Energy Solutions’ portfolio of two-stroke, dual-fuel engines, which are available from all licensees. MAN Energy Solutions further reports that it expects ME-LGIP installation aboard merchant vessels to be extremely competitive price-wise, compared to other, dual-fuel-burning engine types.

Due to ever more stringent emission limits, many LPG carrier operators called for MAN Energy Solutions to develop an LPG-fuelled engine that could power LPG carriers in the most viable, convenient and economical way using a fraction of the cargo already onboard.

LPG is an eminently environmentally-friendly fuel, in much the same class as liquefied natural gas (LNG), and an LPG-fuelled engine will significantly reduce emissions, enabling vessels to meet the stringent IMO SOx emission regulations due to come into force globally from 2020. As well as being an important step towards reaching the 2050 IMO GHG targets, LPG also gives credit towards IMO EEDI compliance requirements.

LPG’s future as a viable fuel for general marine transportation looks promising as it will not require as large an investment in infrastructure – such as bunkering facilities – in contrast to other, gaseous fuels. As a widespread energy source, availability is high and LPG is easier to store and handle, compared with cryogenic gaseous fuels.

Furthermore, LPG is traditionally a cheaper fuel than MGO yet delivers the same performance and efficiency. Importantly, the ability to use LPG cargo as a supplemental fuel source provides significant cost savings for LPGC owners or charterers, including reduced time and fees for fuel bunkering. Accordingly, MAN Energy Solutions expects a strong demand for the ME-LGIP engine from very large gas carriers (VLGCs) and coastal vessels from its introduction.

With a new injection concept, initially developed for methanol, the ME-LGI concept greatly expands the company’s dual-fuel portfolio and enables the exploitation of more low-flash-point fuels such as ethanol, dimethyl ether and, now, LPG.

The engine’s ‘ME-’ prefix indicates that the new engine benefits from well-proven electronic controls that also encompass the fuel being injected by the so-called Fuel Booster Injection Valve. This innovative fuel booster, specially developed for the ME-LGI engine, ensures that a low-pressure fuel-gas supply system can be employed, significantly reducing first-time costs and increasing reliability.

The ME-LGI came about due to interest from the shipping world in operating on alternatives to HFO. Methanol and LPG carriers have already operated at sea for many years and many more LPG tankers are currently being built as the global LPG infrastructure grows. With a viable, convenient and comparatively cheap fuel already onboard, it makes sense to use a fraction of the cargo to power the vessel with an important, side-benefit being its positive, environmental performance.