Mr Maneesh Pradhan, a veteran marine engineer, has been appointed as the Chairman of India’s leading shipping association, Maritime Association of Shipowners Shipmanagers and Agents (MASSA) for a 2-year term from 1st Jan 2023.

As the Managing Director of Anglo- Eastern Ship Management (India) Pvt Ltd, Maneesh currently heads the largest crewing operations from India. He has 28 years of experience in shipping which includes his 10 year tenure at sea and 18 years ashore. 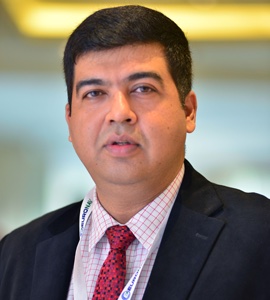 Maneesh is an Alumni of Directorate of Marine Engineering and Training, Kolkata. He joined Anglo Eastern Ship Management (Hong Kong) as a junior engineer in March 1994 and worked his way up to the rank of a Chief Engineer in 2001. He went on to join the Anglo-Eastern office in 2004 as a Fleet Personnel Manager. His first assignment ashore was to start the Kolkata Crewing Office and thereafter he moved to Anglo-Eastern Mumbai as its General Manager in 2011. He was promoted up the ranks over a period of time and was finally appointed as the Managing Director of the Crewing operations in India on 1st Jan 2019.

With about 18 years of experience in crewing, Maneesh works on the Company philosophy of placing the Right People on the Right Ship at the Right Time. With the Company handling a total of almost 21,000 Indian seafarers now, working with people is his passion and comes from the heart.

Maneesh was the Chairman of MASSA-promoted Maritime Training and Research Foundation for the past two years.
Source: Maritime Association of Shipowners Shipmanagers and Agents (MASSA)