Manning costs have risen moderately over the past 12 months, checked by easing officer supply shortage, and are forecast to rise at a similar pace over the next five years, according to the latest Manning Annual Review and Forecast report published by global shipping consultancy Drewry.

Manning costs rose for a second successive year in 2019 but the pace of growth remains moderate and well below the prevailing rate of price inflation. Meanwhile, the shortfall in available officer numbers relative to demand has declined close to equilibrium and is expected to reach a small surplus by 2024, but ratings remain in surplus and are expected to remain so. 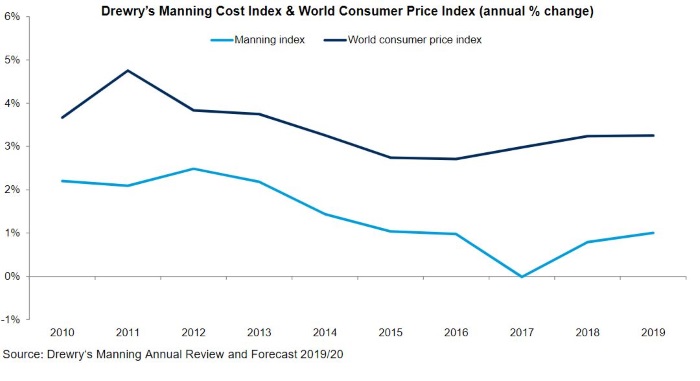 “While there were some pockets of higher wage increases these were focused on the growing LNG sector, otherwise overall manning costs have remained subdued,” said Drewry’s senior manning analyst Rhett Harris. “Certain ranks and experience levels continue to be in tighter supply than the manning market as a whole. These tend to be for experienced senior officers and in particular second engineers.”

Drewry estimates that aggregate manning costs rose by around 1% in 2019, well below the prevailing rate of price inflation, with both ratings and officer pay rising by the same margin (see graph). This follows a similar rise the previous year and flat lining costs in 2017, as the depressed state of most cargo markets made wage increases almost unaffordable.

The shortage of officer supply versus demand is narrowing, and lower-than-anticipated fleet growth is at the core of this.

“However, it remains a finely balanced position with the supply side easily tipped if wages for sea service do not remain competitive compared to shore-based work,” added Harris. “The big social differences between working at sea and ashore are central to this consideration, as well as the fact that young people are now less willing to make compromises for work than previous generations.”

While shipping markets are improving, the commercial environment remains challenging and the economic outlook increasingly uncertain with plenty of downside risk. Hence, despite planned increases in collectively agreed base pay scales, Drewry expects seafarer wage inflation to remain well below the prevailing rate of consumer price inflation over the next five years. Continued pressure to reduce costs combined with improving officer supply conditions will negate incentives to raise salaries.

“However, there will be some variation between the different sectors. Costs for crewing dry and container vessels will likely rise at a slower pace, but in sectors such as LNG and chemicals where there is competition for scarce officers certified to crew specialist ships higher cost inflation is anticipated,” concluded Harris.
Source: Drewry

Previous: Shipowners which gambled on scrubbers may reap rewards
Next: Sailing into a climate-challenged future – is shipping able to cope?