Marginal fall in OECD unemployment rate in February 2021, to 6.7%, 1.4 percentage points above its pre-pandemic level

The OECD area unemployment rate declined in February 2021, to 6.7% (from 6.8% in January), remaining 1.4 percentage points above the level observed in February 2020, before the COVID-19 pandemic hit the labour market.[1] 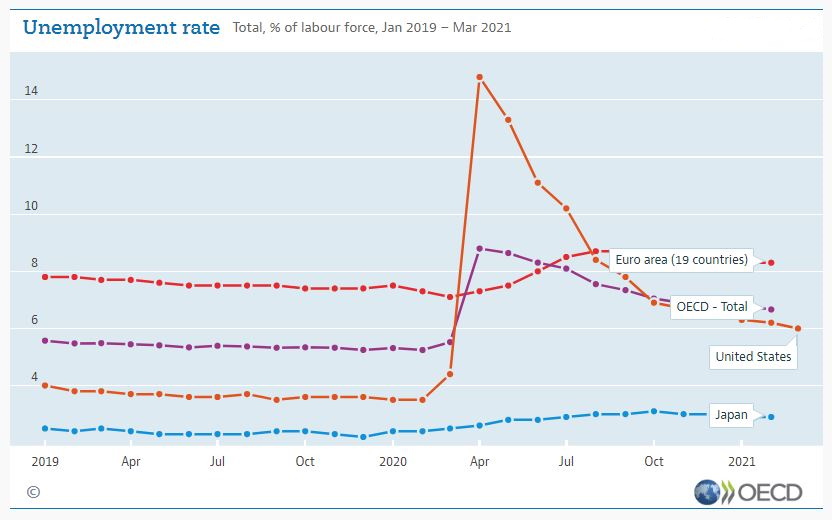 More generally, it should be noted that unemployment statistics do not account for the full amount of labour market slack due to Covid-19, as some non-employed people may be classified as “out of the labour force”, because, due to the pandemic, they are either not able to actively look for a job or are not available to work.[2]

The measures put in place by national governments to reduce the spread of the Coronavirus (Covid-19) may have impacted on the ability to field surveys, and so, in turn, on the quality of statistics typically produced. In addition, because of differences in national practices used to determine whether individuals are unemployed when under confinement, international comparability has also been affected. See the note on the divergence in employment and unemployment statistics during the Covid-19 crisis.

[1] Some care is needed in interpreting the fall in the OECD area unemployment rate compared to the April 2020 peak, as this largely reflects the return of temporary laid-off workers in the United States and Canada, where they are recorded as unemployed. For Canada and the United States, the statistical treatment of people on temporary layoff is different from other countries, where these people are typically recorded as employed. See the note on the divergence in employment and unemployment statistics during the Covid-19 crisis on next page. [2] The ILO guidelines define the unemployed as “all those of working age who were not in employment, carried out activities to seek employment during a specified recent period and were currently available to take up employment given a job opportunity”. Some not-employed people may be classified as “inactive/out of the labour force” because, due to the pandemic, they are either not able to actively look for a job even if they are available to work or are not available to work because of family responsibilities as schools and care services are closed.
Source: OECD
2021-04-13
hellenicshippingnews..
Previous: ‘I’m so excited’ – England reopens with pints pulled, shopping sprees and hair cuts
Next: Japan’s Golden Week gasoline demand seen above 2020 despite measures