Gard’s mission is: Together we enable sustainable maritime development. To deliver on this mission, we explore and support the development of emerging technologies including maritime autonomous surface ships.

The Nordic countries are leading the way in this area and we are proud to be collaborating with Yara International (Yara) and their newly established company Yara Birkeland AS that is developing the well-known Norwegian autonomous logistics project, YARA BIRKELAND. Construction of the zero-emission autonomous containership has already begun. When the ship enters service in early 2020, she will be operated by onboard crew while the autonomous systems are being tested and certified safe. By 2022 she is expected to be ready to load cargo and navigate autonomously without crew onboard. The domestic voyage will be between the Yara factory at Herøya and the ports of Brevik and Larvik in Norway.

Although Yara is not new to shipping, they are not what those in our industry may regard as ‘traditional shipowners’. Yara is a multi-national corporation with a simple mission to Responsibly feed the world and protect the planet. Once in service, the YARA BIRKELAND will transport bagged fertiliser in containers thereby removing around 40,000 annual truck journeys from the roads. With an expected increase in production at the Yara factory of 25% from 2018, the logistic shift from land to sea will greatly reduce NOx and CO2 emissions, and improve road safety in the area where the trucks currently operate.

Yara first partnered with Kongsberg Maritime, a leading Norwegian maritime technology corporation established back in 1814, which is responsible for the development and delivery of the key enabling autonomous technologies on the YARA BIRKELAND.

Back in 1967, Kongsberg delivered the first main engine remote control system for diesel driven ships which allowed the duty officer on the bridge to control the main engine without help from people in the engine room. The system was class approved for periodically unmanned engine room operation. The simplified operation, reliable performance and reduced operational cost made it a huge success. Further on in 1969, Kongsberg Maritime delivered the world’s first computerised radar system to a cargo liner. This radar came with an automatic plotting aid capability that calculated the tracked ship’s course, speed and closest point of approach to assess if there was danger of a collision. From 1977 onwards Kongsberg Maritime delivered multiple maritime innovations; including delivering its first dynamic positioning system in 1977 and its first autonomous underwater vehicle in 1996, all leading up to 2017 when they received the order for their first autonomous ship.

Other Norwegian partners in the YARA BIRKELAND includes the designer Marin Teknikk, shipbuilder VARD, thruster manufacturer Brunvoll, class society DNV-GL, IT solutions by Evry, and the Norwegian Flag and Coastal Administration. Although Yara has not yet announced who will operate the YARA BIRKELAND Massterly is a likely candidate. Massterly, one of the first to offer autonomous ship management from their operations centre in Oslo, was established in 2018 by Kongsberg Maritime and Wilhelmsen.

The key non-Norwegian suppliers to the Yara Birkeland project are Swiss Leclanchén, supplying the battery pack, and the Finnish Kalmar, delivering the land-based container transport system from warehouse to quay. The Kalmar equipment consists of three self-driving straddle carriers and a container gantry crane that will be developed to operate autonomously.

The YARA BIRKELAND has received NOK 133.6 million (USD 16 million) in support from the Norwegian government enterprise ENOVA. Prime Minister Erna Solberg was present at the signing of the shipbuilding contract at the ship yard in Breivik, Norway where she said:

“This is a good example of how Norwegian industry can collaborate to create new solutions and green jobs. YARA, KONGSBERG and VARD have built on their knowledge about technology, logistics and ship building with an ambition to create sustainable innovation together. The result is exciting pioneer projects like this one. I am proud that the Government has supported the development of YARA BIRKELAND through ENOVA and send my best wishes for the construction.”

Finland has also made great progress on autonomous ships. Gard is excited to be supporting Finnish state-owned ferry operator FinFerries, who together with Rolls-Royce successfully demonstrated autonomous operation of their ferry FALCO in the testing area south of the city of Turku, Finland in December 2018. Gard, as insurer of the ferry, was invited to witness the demonstration.Mats Rosin, FinFerries’ CEO, said following the demonstration:

“We are very proud that maritime history has been made on the Parainen-Nauvo-route once again. First with our world-renowned hybrid vessel ELEKTRA and now FALCO, as the world’s first autonomous ferry. As a modern ship-owner our main goal in this cooperation has been on increasing safety in marine traffic as this is beneficial for both the environment and our passengers. But we are also equally excited about how this demonstration opens the door to the new possibilities of autonomous shipping and safety.”

Yara’s and FinFerries’ success is guided by taking a responsible and sustainable approach, knowledge sharing and dedication to industry collaboration to make a difference and help deliver a safer and more environmentally friendly maritime industry. 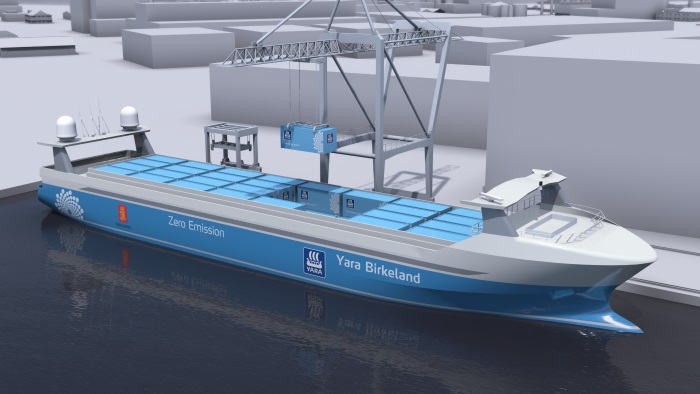 Being there for the future

For autonomous and remotely operated vessels to become a reality several general challenges must be overcome, such as public acceptance, the development of rules and regulations, and acceptable and insurable risk levels. The massive technology changes happening in the transportation sector will not only influence how cars, trucks and ships will be operated and controlled, but also how they are powered by cleaner energies.

Gard have many Members and clients who are on the forefront of eco-friendly innovations in shipping. We are collaborating with our Members and clients, and participating in industry, academic and legal working groups and forums at national and international levels.

Our loss prevention and risk assessment team is looking into how human factors and technology is influencing the maritime industry, including autonomous ships. The aim is to broaden our insight into both the opportunities and risks, and to address key issues.

The objectives of NFAS are to strengthen the Norwegian cooperation between the academic community and researchers, regulatory authorities and industry partners that are interested in the human factors, safety, technology and regulatory aspects of autonomous ships and their use. This includes, e.g. research and innovation strategies, rule development, testing and qualification principles and national test facilities.

Similarly on an international level, the objective of INAS is to be an international informal forum where national and regional interest organisations can participate and contribute by sharing research and knowledge on autonomous ships. INAS is maintaining a list of all the forums participating and also lists the various testing areas for autonomous ships. Gard have been actively engaged not only in the Norwegian forum, but also in many of the other national forums.

Beside our participation in the newly established forums dedicated to autonomous ships, Gard also participates in the work and discussions going on in more well-established legal, technical and insurance forums.

Through CEFOR and IUMI we will:

The International Group of P&I Clubs has established a working group on autonomous ships. This group is also participating in the Comité Maritime International (CMI) working group on unmanned ships that have published a position paper on autonomous ships. In parallel the CMI is also participating in the reviews being undertaken within the IMO Maritime Safety and Legal Committees.

Our most recent contribution was sharing our insight with the joint project between CORE Advokatfirma and Cefor; Zooming in on liability and insurance Maritime Autonomous Surface Ships, published on 10 December 2018.

Ironically, Gard’s creation in 1907 was a rejection of “new” technology as the association was formed by shipowners who rejected steam ships and wanted a P&I club dedicated only to sailing ships. Today, 111 years later, we are embracing new technology by collaborating and learning with those developing autonomous ships as well as regulators and academia on the national and international stages. It is only together that we enable sustainable maritime development and get a common understanding of what maritime autonomous surface ships on the horizon will bring to us.

Gard is working hard to be part of the problem-solving force behind autonomous ships. In our next article, we will be giving further insights into how autonomous ships are changing the risk landscape and Gard’s insurance perspective on the human element, fault-based liability, financial limitations, cyber risks and product liability.
Source: Gard (http://www.gard.no/web/updates/content/27107214/maritime-autonomous-surface-ships-on-the-horizon)