The topic is reiterated in every discussion revolving around the future of the sector: Unmanned shipping. But it will be a long way until truly autonomous ships become a reality. At this year’s Maritime Future Summit, held one day ahead of the SMM opening, tomorrow’s innovative and visionary technologies were therefore not the only issues addressed by the speakers. Under the motto “Mind the Gap – Bridging Disruptive Technologies”, they devoted considerable time to the required organisational initiatives and the numerous obstacles that still must be overcome in day-to-day maritime business. In his keynote titled “New Thinking in Shipping – a liner company’s perspective”, Hubert Hoffmann, CIO & CDO of MSC Germany, set the stage for the conference. “It is not the technology as such that presents the challenge but changing our way of thinking.” Hoffmann pointed out that the business and bureaucratic processes in ocean shipping have remained virtually unchanged over the past 80 years. The same applies to port registration procedures which still have not been harmonised globally. His conclusion: Outdated analogue procedures must be digitalised and standardised.

A view shared by Mark O’ Neil, CEO of Columbia Marlow Holding. “Digitalisation will primarily enable optimised work processes.” This will most likely occur in an evolutionary process rather than an abrupt revolution as frequently suggested by the media. To handle the enormous cost of digitalisation, O’Neill recommended that the industry adopt a strategic approach. In his speech titled “Digitization in fleet operations – a ship manager’s perspective”, his advice was this: “Ship managers should primarily focus on the customer’s technical needs.” Nevertheless, when it comes to making crucial decisions it would be unwise to procrastinate, he said. His creed: “It would be better to take the right step at the wrong time than vice versa.”

How to become a true pioneer by taking the right steps at the right time was the subject of a presentation by Ulf Siwe, Manager at the Swedish Maritime Administration. The government-supported Mona Lisa project developed the Sea Traffic Management (STM) methodology as a common, automated communication standard for ships and ports. Its benefits include a reduced administrative burden on crews, in particular with regard to reporting; reduced fuel consumption thanks to optimised routes and coordinated port calls; and increased safety through the avoidance of collisions and groundings. Lower noxious emissions would be an additional benefit. STM has already been implemented on 300 chips.

ABB Marine and Ports Business likewise believes in network integration as a means to improve performance. The technology group offers its customers remote condition monitoring solutions enhanced by augmented reality. A much greater challenge appears to be the use of fuel cell technology in shipping as discussed by Mikko Lepistö, Director of Software and Automation Operations at ABB Marine and Ports Business, in his speech “How to cope with disruptive markets”.

Another highly sophisticated technology, the Digital Twin, has been embraced by the industry rather quickly. A digital twin is a virtualisation of an actual ship that is used to simulate and explore the ship’s behaviour. Dr. Pierre C. Sames, Director of Maritime Technology at the ship classification society DNV GL, explained: “The digital twin can be used to determine the most fuel-efficient ship design or forecast the lifespan of individual components.” The better the algorithm and the more powerful the virtualisation system, the more accurate the predictions will be, he added. “In future, smart, self-learning machines will be used in autonomous ships,” Sames believes.

An outlook into a more distant future was presented by Kohei Matsuo, Project Director R&D at the Japanese National Maritime Research Institute, in his speech “A Technology Roadmap to 2050 – a perspective from the Far East”. Matsuo suggested that big data will enable the use of ultra light, extremely robust materials, which might give rise to entirely new ship types. He also expects flexibility to increase: “In the age of 3D printing, production will no longer be confined to one particular location. Everybody will be able to build ships at any place.”

If autonomous ships travelling the world’s ports and oceans are to become a reality one day, an appropriate legal framework will be needed. Wu Sun, Deputy General Manager of the China Classification Society (CCS), provided an overview of potential conditions of class and technical safety requirements which will have to be created for such ships. 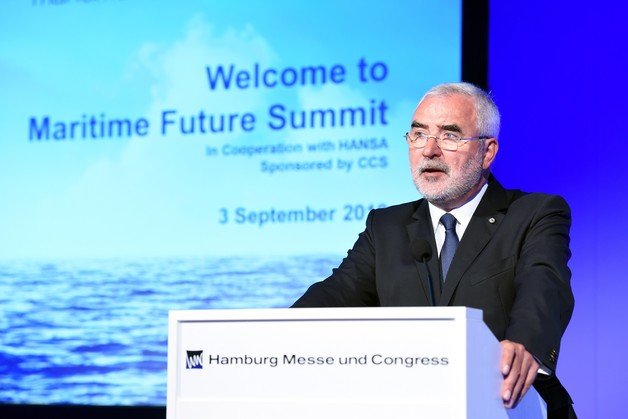 Maritime Future Summit: Evolution, not revolution
At this year’s Maritime Future Summit, held one day ahead of the SMM opening, tomorrow’s innovative and visionary technologies were not the only issues addressed by the speakers
© Hamburg Messe und Congress/ Nicolas Maack

And what about the logistics chain of the future? Christian Roeloffs, Managing Director of the start-up company Container xChange, believes that conventional all-round providers will be at a disadvantage. “The winners will be specialists occupying specific niches of the value chain.” At the same time, online platforms will play an and ever more important role as the mediators between manufacturers and buyers in shipping.

In the final Q&A session, Nick Danese, CEO of the software supplier NDAR, summed up the core issue: “Based on my professional experience of 35 years I can say that the willingness to embrace new technologies is generally overestimated, whereas the necessity to do so is clearly underestimated.” Pierre C. Sames added: “Those who are capable to adapt and to cooperate with other players by using overarching systems will be successful.”

The Maritime Future Summit co-organised by the industry magazine HANSA has provided plenty of food for thought, and the SMM exhibition offers visitors great opportunities to see live demonstrations of innovative technologies and form cooperation partnerships that could enable them to better tackle the challenges of the future.
Source: SMM Hamburg 2018