The second MII of the CML took place at the beginning of May at the TUHH and the organizers were happy about a fully booked event. In the three main topics „Digital & Autonomous Ports“, „Maritime Data Analytics & Artifi cial Intelligence“ and „Smart & Green Shipping“ current research projects were presented by external speakers of the research partners and scientists of the CML and discussed with the participants.

In the fi rst lecture block, the development of a remote-controlled tugboat for port manoeuvres in the FernSAMS project was presented. With the help of Augmented Reality, this remote control is implemented at the CML in an application-oriented manner (see article on the following page). In the second lecture block, the development of robot applications in harbours for the investigation of ship hulls, quay facilities and seabed conditions in the RoboVaaS project was explained. 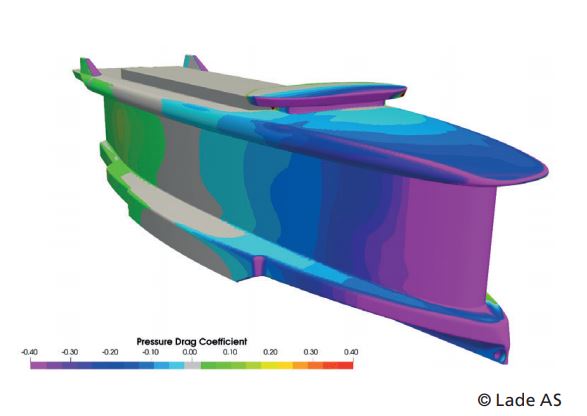 Approximately 50% of the Vindskip® hull offers additional propulsion (blue-violet bow section), depending on the angle of attack of the apparent wind. Credit: Lade AS

At the CML the prototype of an innovative watercraft is built for RoboVaaS, which consists of an autonomous surface vehicle connected with an unmanned underwater vehicle. And in the third session, the inventor of the Vindskip® presented the current status of the development of the Car Carrier, which aims to reduce energy consumption pragmatically and dramatically at the same time using a drive concept consisting of LNG and wind propulsion through the sailing characteristics of the ship‘s hull. The concluding panel discussion on the hype or potential of digital business models in the maritime sector provided exciting insights and confi rmed that it is important to pursue such models.
Source: Fraunhofer Center For Maritime Logistics And Services