Our panelists looked at the heightened security risk to ship and crew from several different perspectives – operational, commercial, legal, insurance and, importantly, from personal experience. Steven Harwood from AMBREY took us through the crisis management process using a case example from a kidnapping that took place in December 2019. Gard’s Siddharth Mahajan described his brushes with pirate attacks while sailing as a Master. Our thoughts were never far from the seafarer and we were proud to be joined for the webinar by over 100 active seafarers from the Hafnia fleet.

AMBREY’S Harry Pearce kicked off by providing an overview of global maritime crime and war risk perils, forecasting numbers for 2021 to be down against last year, though with greater parity between regions and a higher relative share of incidents in Central and South America.

West Africa’s Gulf of Guinea was the focus of the brief, as the current hotspot for piracy, and specifically kidnap for ransom. Nigeria continues to dominate statistics, accounting for approximately half of the regional total each year. However, there has been increasing displacement of the threat, introducing greater complexity as to the right security response. Harry cautioned that there are consistent and cyclical seasonal variations in the prevalence of the threat and stressed the importance of retaining a sound intelligence picture. Harry closed with some good news – pirate efficacy has reduced, meaning attacks in 2021 have been less successful than in the past. Further, he noted that there are a host of critical initiatives and naval deployments coming onstream in the near future. 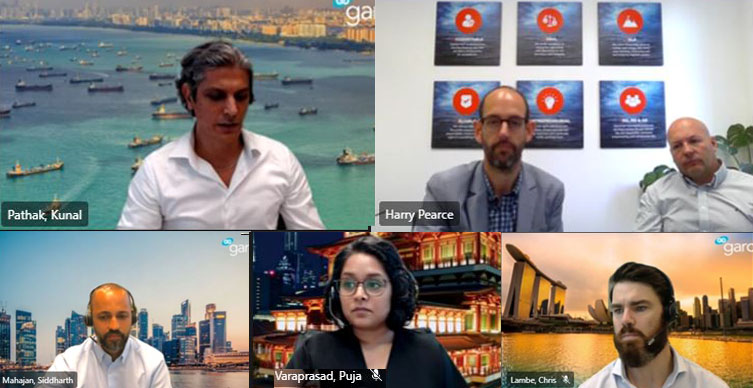 The webinar addressed two scenarios – transiting through the Gulf of Guinea and transiting through a war risk area. The second scenario focused on the attack of the BW RHINE by an explosive laden remote-controlled skiff in Jeddah in 2020. Broadly speaking, piracy is considered a war risk and both hull and machinery property loss and P&I liability are insured by a war risk policy. As explained by Gard underwriter, Chris Lambe, the Joint War Committee designates certain geographical areas as listed areas and shipowners are required to notify their war risk underwriter of voyages in the listed areas as a condition of cover and for purposes of adjustment to premium.

Piracy outside of a listed area is still considered covered by the war risk policy, it is simply not a condition that advance notice of the voyage is provided. Gard’s Defence lawyer Puja Varaprasad noted that different charterparties may define war risk more broadly than the JWC listed areas. Puja also noted that certain charterparty clauses, for example the BIMCO piracy clauses, include a provision whereby the Master and or the owners can refuse to proceed to an area if in the Master’s or the owner’s reasonable judgement, the area is dangerous to the vessel, cargo, crew or other persons on board due to actual or threatened reports of piracy.

Crew contracts may provide for additional compensation and other rights for sailing in designated high risk areas. For example, under the ITF International Bargaining Forum collective agreement, seafarers receive additional monetary compensation when the vessel transits through a designated risk area depending on whether the region is classified as a high risk area, warlike operations area or an extended risk zone. Further, the seafarer may also have a right to refuse sailing and be repatriated at the company’s expense. As noted by Siddharth, designation of high risk areas differs between the IBF/ITF crew contracts and the Joint War Committee (JWC) listed areas. There is also a voluntary reporting area (VRA) which is administered by Marine Domain Awareness for Trade – Gulf of Guinea (MDAT-GoG). The West Africa VRA, unlike the reporting area off Somalia, does not contain a designated high risk area. Boundaries of all three areas are shown below.

Threat awareness, training and preparation are key to managing risk

Although addressing security from different perspectives, all the panelists shared common key takeaways. Awareness of threats includes up to date intelligence and requires stakeholder collaboration. Security should not be treated as a peripheral task and owners must ensure that their crews are well informed, trained and equipped to face the threats when sailing through areas of heightened risk.

From the legal and insurance perspective, owners must engage with war insurers as early as possible and understand the nuances of different insurance covers. Preparation also goes to review of charterparty clauses including piracy, war and trading exclusions. And, finally, communication and transparency before an incident, during an incident and after an incident is essential. This includes both communication internally between the departments responsible for fixing vessels and those responsible for crew, as well as between the management and the crew. Seafarers need to both understand the risk and planned response, and also be given the opportunity to voice their concerns.

We thank AMBREY for sharing their analysis and experience with Gard and our webinar attendees. The webinar presentation was one hour followed by a lively thirty-minute question and answer period. The webinar was recorded and can be viewed here. We had many more questions than we could answer in the time allotted. We will prepare another Insight to publish the questions with the panelists’ and Gard experts’ responses.
Source: Gard, https://www.gard.no/web/updates/content/32003104/maritime-security-unsafe-seas-insecure-crew