Australia has been emerging as a silver lining in a gloomy global wheat market, but prolonged wet weather and excessive rainfall in the country may threaten its position as a key supplier, weighing on milling wheat prospects.

Australia’s wheat harvest is set to be in full swing from the week beginning Oct. 31 amid concerns hovering over the extension of the so-called “grain corridor” in the Black Sea, a major wheat-supplying region.

Australia is headed for near-record wheat production in the marketing year 2022-23 (October-September). Both the US Department of Agriculture and the Australian Bureau of Agricultural and Resource Economics and Sciences have projected output at 34 million mt and 32.2 million mt, respectively, reflecting the second-highest production against last year’s record harvest of 36.3 million mt.

Although trade participants believe that Australian wheat will be crucial for the global supply chain if the Black Sea grain corridor expires in November, there are concerns about whether wheat supply from the country will be able to cover the demand for milling wheat in key importers.

Persistent showers over key wheat-growing regions in Australia have raised concerns over the quality of the crop, with heavy showers usually leading to an increase in moisture level in wheat and diluting its protein content.

“Australia has received excessive showers over the past few weeks, which may have been due to the La Nina for the third consecutive year,” a trader based in Canberra said.

“Parts of New South Wales are still receiving heavy showers which have led to an increase in moisture level in the crop,” a trader based in Singapore said.

“The key concern in the eastern states (including New South Wales) is the risk of rain during harvest, resulting in downgraded grain quality,” the US Department of Agriculture said.

New South Wales is the second-largest producer of wheat in Australia, followed by Western Australia.

Apart from New South Wales, excessive rainfall during the past few weeks has delayed harvest in Western Australia too, sources said.

“The forecast of showers over parts of Western Australia has elevated the risk of poor grain filling,” a Singapore-based trader said.

However, despite the concerns over the quality of the crop, Australia is likely to become a key supplier of wheat as doubts cloud the future of the Black Sea grain corridor, according to sources.

The safe passage deal signed between Russia and Ukraine on July 22, to resume exports through the Black Sea, is supposed to expire on Nov. 19.

With the concerns mounting over the grain corridor agreement, demand for Australian wheat has started growing.

Asian buyers, who have been looking to purchase Black Sea wheat, are now turning to Australian feed wheat, sources said.

The 120-day UN-brokered Black Sea Grain Initiative had also laid the way for exports of corn.

Without the prospect of Ukraine wheat and corn exports, buyers are likely to turn to Australian supplies, sources said. 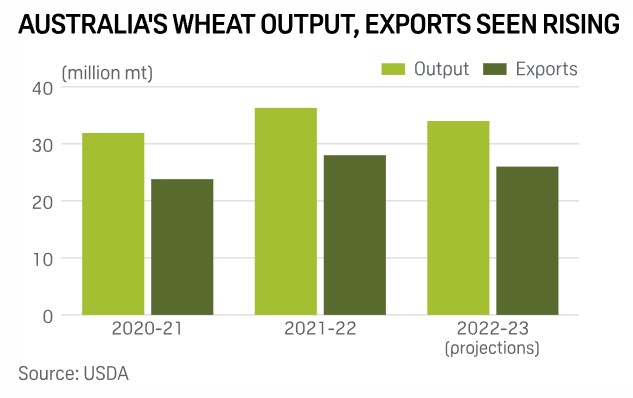 The USDA has scaled up its projection for Australia’s wheat exports in MY 2022-23 to 26 million mt in October, up from 24 million mt seen six months ago.

However, with higher-than-average rainfalls, particularly in the south and eastern regions, affecting the protein content of the crop, significant volumes of lower quality will probably find homes in the animal feed industry, according to market expectations.

Additionally, logistics may pose a challenge as January shipping slots for Australian exports are limited which would elevate prices, sources said.

CBH was due to allow bidding on their portal on Oct. 26 but due to technical issues it has delayed the release, trading sources said, adding that when the bidding would resume has not been announced yet. However, additional slots for 10 ships with each 60,000 mt will be available for the first half of every month from December 2022 to July 2023 and the second half of the month for August and September 2023, according to CBH’s website.

This is not the first time CBH added capacity when export demand is strong. In March 2022, CBH released another 500,000 mt of shipping capacity to meet a surge in demand following the Russian invasion of Ukraine.

2022-10-31
hellenicshippingnews...
Previous: Metal markets brace for a downturn of a different kind
Next: Prices under negative pressure despite mill list hikes