U.S. stocks rebounded for a second day on Wednesday as investors snapped up beaten-down technology and internet favorites and strong company results lifted spirits, even as the S&P 500 closed out its worst month in seven years.

Fears of rising borrowing costs, global trade disputes and a possible slowdown in U.S. corporate profits spooked equity investors this month, with technology and internet names that had powered the market’s rally taking the biggest hit.

“People are just happy to have the month of October over,” said Peter Tuz, president of Chase Investment Counsel in Charlottesville, Virginia.

“All of the fears that popped up last week are being pushed into the background right now. I don’t know if it’s going to have any legs to it. Just a few earnings in the next few days can change things a lot.”

On Wednesday, shares of Facebook Inc (FB.O) gained 3.8 percent after the social media giant said margins would stop shrinking after 2019 as costs from scandals ease.

Shares of Amazon.com Inc (AMZN.O) and Apple Inc (AAPL.O), which is due to report results after the bell on Thursday, climbed as well, by 4.4 percent and 2.6 percent respectively.

The Nasdaq gained 3.6 percent in the last two sessions, its biggest two-day percentage gain since June 2016.

The Cboe Volatility Index .VIX, the most widely followed gauge of expected near-term gyrations for the S&P 500, had its lowest close since Oct. 23.

The Dow lost 5.1 percent for the month, its biggest monthly percentage decline since January 2016.

October also marked only the 12th time since the start of the current equity bull market that both stocks and U.S. Treasury bonds produced losses in the same month, based on preliminary data. 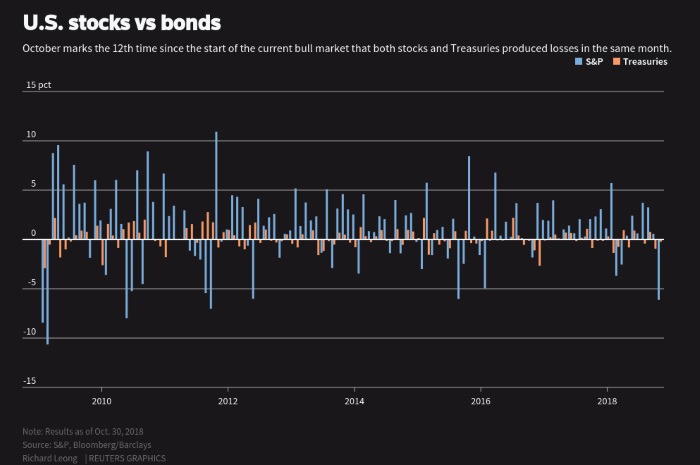 Mostly stronger-than-expected results have pushed up third-quarter profit growth estimates for S&P 500 companies to 26.3 percent, according to I/B/E/S data from Refinitiv data.

Shares of Kellogg (K.N) fell 8.9 percent after cutting its full-year profit forecast due to higher advertising and distribution costs.

The financial sector .SPSY rose 1.4 percent and the S&P 500 regional banks index .SPLRCBNKS gained 1.9 percent, on the Federal Reserve’s proposal to ease regulations for U.S. banks with less than $700 billion in assets.

Advancing issues outnumbered declining ones on the NYSE by a 1.53-to-1 ratio; on Nasdaq, a 1.59-to-1 ratio favored advancers.

About 9.8 billion shares changed hands on U.S. exchanges. That compared with the 8.7 billion-share daily average for the past 20 trading days.