There has been an increase of GPS spoofing incidents in and around coastal areas and ports in the People’s Republic of China (PRC) during the past year. In July 2019, an American containership transiting the Huangpu River near the port of Shanghai experienced nearby ships appearing and disappearing from its ECDIS display. The vessel proceeded into port and later lost signals on both GPS units just before berthing. A formal report was thereafter filed with the US Coast Guard (USCG) following this incident.

Following these reports, the Center for Advanced Defense Studies (C4ADS), a nonprofit organization that analyzes global conflict and security issues, examined automatic identification system (AIS) data in the area. It was discovered that hundreds of ships had been spoofed and the activity had been ongoing for months affecting ships across Shanghai simultaneously and mostly vessels navigating the Huangpu River.

Days’ and weeks’ worth of data revealed the spoofed ships’ GPS signals congregated into large circles, later dubbed “crop circles”. This tactic is unlike traditional spoofing which moves signals to the same position creating a confusing traffic situation for ships’ pilots. Spoofing is more easily detected in coastal areas because of the wide availability of terrestrial and satellite based AIS data.

A string of spoofing attacks in the Black Sea was previously reported in 2017. It is likely that the kinds of mass disruptions as seen in the Black Sea and PRC maritime regions are occurring elsewhere as they have been difficult to detect. 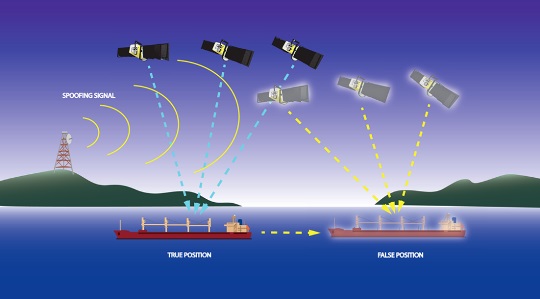 An article in the November 2019 edition of MIT Technology Review, Ghost ships, crop circles, and soft gold: A GPS mystery in Shanghai, provides a summary of the kind of possible technologies likely being used and possible reasons for observing this activity in the Shanghai region.

GPS jamming and spoofing have the ability to create confusion in a ship’s wheelhouse particularly when transiting a busy port. Vessels are advised to take precautions if experiencing jamming (blocking of the satellite signal so that a receiver can no longer operate), or spoofing (making a GPS receiver display a false position).

If a GPS malfunction occurs, vessel Masters are reminded to take the following measures:
plot the vessel’s last know position;
switch to the primary/secondary navigation device;
make a log entry detailing the time and location of the failure;
use all available means of navigation to navigate safely; and
report all failures immediately to the appropriate authorities.
Source: The American Club