On January 1, 2020, the International Maritime Organization (IMO) will introduce increased limitations on sulphur emissions by ships. Set forth by MARPOL (see sidebar, “The adoption of MARPOL”), these global limitations will require operators to consider alternatives to the current widespread use of high-sulphur fuel oil (HSFO). Such alternatives include the installation of scrubber systems to remove sulphur from the gas stream or a switch to very-low sulphur fuel oil (VLSFO), marine gasoil (MGO), or liquefied natural gas (LNG).

Limited desulphurization-refining capacity, as well as other logistical considerations, constrain the supply of VLSFO and MGO. Therefore, vessel operators may experience fuel shortages and a sharp rise in prices on the back of an expected spike in demand. LNG’s widespread use as a marine transport fuel, however, is primarily constrained by limited LNG bunkering infrastructure. In fact, several countries, such as Belgium and Singapore, are currently investing in this area to increase the viability of LNG as an alternative fuel supply, though converting existing vessels to accommodate LNG is expensive. Therefore, nearly all growth in this area will come from newly built vessels or LNG-ready vessels.

In addition to the cost of conversion, shipowners and operators face three challenges. First, there are only a few months left before the new emissions limitations come to pass. Second, owners and operators will need to consider the potential LNG shortages and price increases, both likely results of the sudden increase in demand. And finally, they will be on the hook to provide commercial rationale to stakeholders for meeting these new regulations.

While the value proposition of LNG varies across segments of the shipping sector, it is (perhaps unsurprisingly) most attractive as a fuel for the approximately 550 LNG carriers currently operating worldwide. We expect to see a rapid rise in adoption of LNG as a fuel in this segment, potentially increasing demand by nine million tons per annum (mtpa), or 3.0 percent of annual demand, over the next two years. Therefore, shipowners and operators in 2020 should consider switching to forced LNG boil-off gas (BOG).

A shift in the fuel mix of the global shipping industry

MARPOL bans the use of any bunker fuel in which sulphur content exceeds the 0.5 percent threshold—unless a vessel has the right equipment onboard, such as fuel scrubbers, to process high-sulphur fuels. These scrubbers spray alkaline water into a vessel’s gas exhaust to remove sulphur dioxide and other unwanted chemicals or pollutants. As 2020 draws near, some marine-solutions companies have seen a record number of orders for scrubbers. However, given the short time remaining before enforcement of the new limitations and the unsuitability of scrubbers for use on certain types of ships, it’s highly unlikely that they can be adopted by shipping fleets around the world.

In some cases, noncompliance is a distinct possibility, with doubts remaining over how effectively the regulation will be enforced and compliance monitored. To some extent, noncompliance will be addressed by the IMO’s recent announcement of a ban on vessels that lack scrubbers using ports to load HSFO. In addition, there will be increased pressure on authorities from leading shipping companies, which are expected to align with the new legislation, to ensure that enforcement is followed for the broader pool of shipowners, with the expectation being an even playing field. 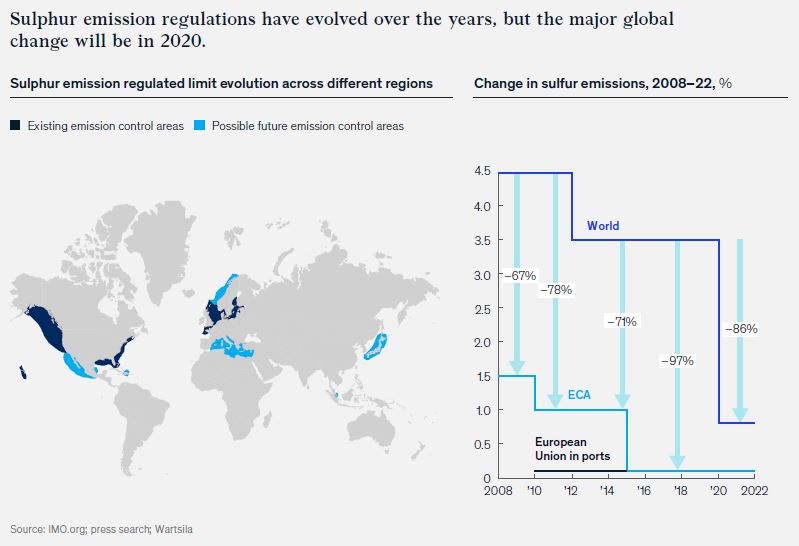 The special role of LNG for LNG carriers

To comply with MARPOL, LNG carriers face most of the same options as the broader shipping industry. Even before the new regulations go into effect, forecasts show demand for LNG is likely to grow at 3.0 percent a year from 2019 to 2035, well above the growth of overall gas demand, which is projected at 1.0 percent a year. Asia—especially China—and Europe will likely be the primary markets for increased LNG, while sector-specific growth will include electric power and industrials. Although demand in the transport sector is expected to remain relatively minimal, it will experience the fastest growth in the coming years. And within transport, the shipping industry is expected to play an outsized role.

Until now, the standard practice for LNG carriers has been to use BOG as fuel and to supplement with HSFO, which is currently more economical than LNG. After January 1, 2020, however, LNG carrier owners and operators will be required to meet the 0.5 percent threshold. The built-in ability of these ships to switch to LNG as an onboard fuel source means that the LNG option will likely be far more attractive. Installing scrubbers is not typically an option for LNG carriers because of space constraints on the ships themselves, high adaptation costs, limited yard space, and safety issues.

Most LNG carriers can force BOG and use it in place of HSFO (Exhibit 1). Therefore, they do not require conversion costs to stop using HSFO—though a reserve of MGO, other distillates, or VLSFO is expected to be kept for low-speed movements and emergencies. One exception is slow-speed-diesel-class (SSD) LNG vessels, which reliquefy BOG and use marine diesel as fuel. SSD ships are expected to stick with diesel, or other distillate fuels, because conversion to LNG would require dry docking and expensive adaptation. 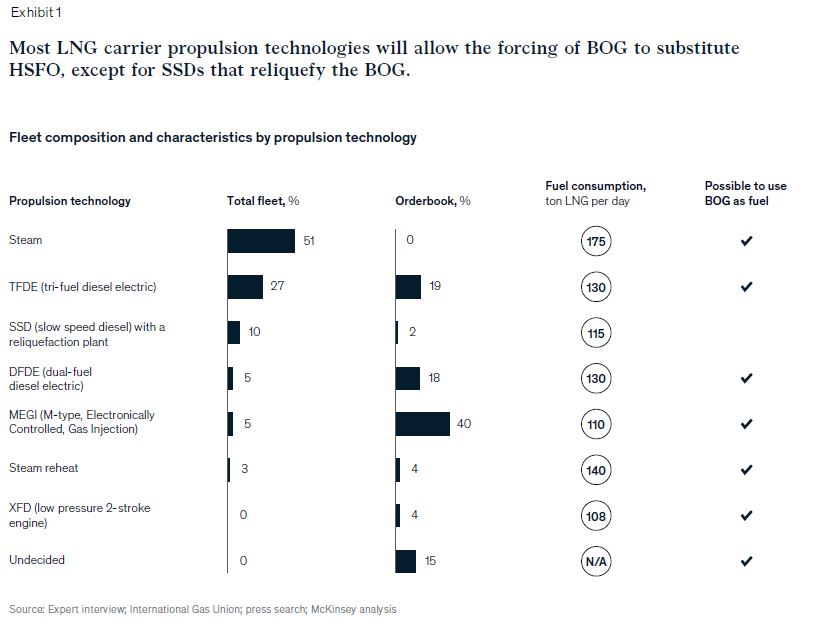 In addition to meeting the new regulations, using LNG as bunkering fuel is cost effective—assuming the cost of using the onboard LNG is less than the equivalent MGO or VLSFO. This is typically the case, and likely to be more so if MGO or VLSFO prices rise on higher bunkering demand after the MARPOL limitations go into effect as expected. However, given the specificities of an LNG carrier, the attractiveness of those options is quite different from the overall industry (Exhibit 2). Such differences mean the most credible options for LNG carrier owners or operators will be the use of LNG and VLSFO and other distillates. 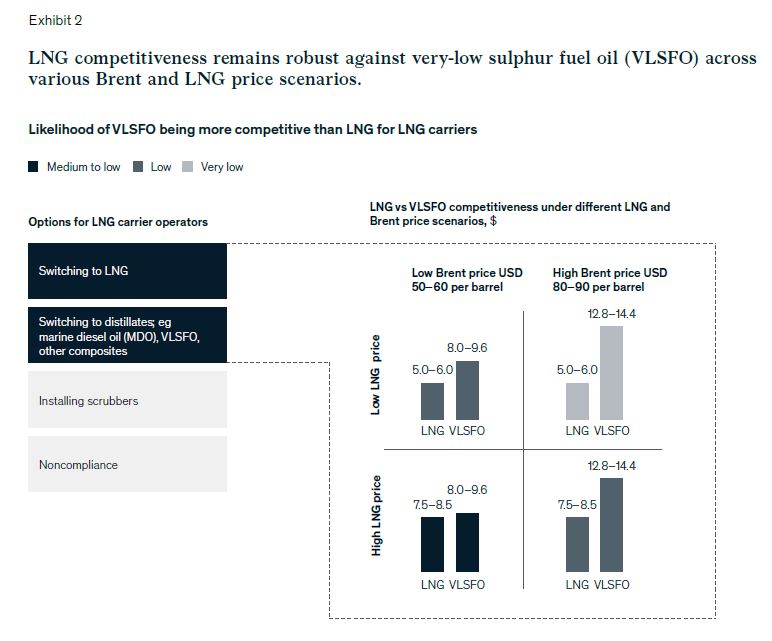 The trade-off between the two most compelling options—VLSFO and LNG—boils down to their comparative cost (Exhibit 3). It is expected that the 0.5 percent VLSFO will be priced at a premium to crude oil, the likely result of higher demand and supply constraints, which are linked to the capacity for secondary refining and the high levels of investment required for expansion. In general, LNG tends to be priced at a 25.0 to 35.0 percent discount to crude oil on an MMBTU basis. 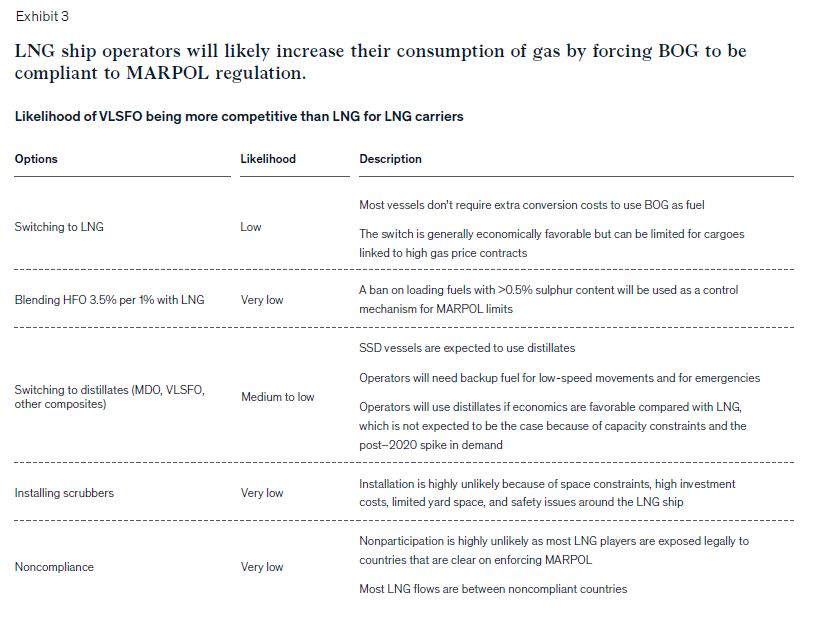 In all cases, LNG remains far likelier to be more economical than VLSFO for LNG carriers for several reasons. First, VLSFO will experience a significant increase in demand after the MARPOL regulations go into effect, and marginal producers will produce VLSFO at 16.0 to 17.0 percent of Brent Crude on an MMBTU basis. Second, Brent-indexed contracted LNG is priced below VLSFO prices. Third, Asia-delivered ex-ship spot prices are linked to delivered cost of American LNG cargoes to Asia, which are expected to average $7 to $8 per MMBTU in the base case scenario. And finally, most LNG carriers can begin using BOG as fuel today without further modifications.

The future of LNG consumption

Faced with this commercial incentive, LNG ship operators are likely to widely switch to forced BOG as the lowest-priced option. This switch could mean that after 2020 there will be a significant rise in the difference between the volume loaded onto LNG carriers and the volume discharged as the amount of LNG consumed during voyages increases.

In any case, natural BOG is expected to increase because of higher produced volumes and more cross-basin LNG trade flows. After the application of MARPOL in 2020, however, we expect up to 90 percent of the LNG carrier fleet to substitute its current HSFO use with forced BOG. This could create an additional nine mtpa of LNG demand as total BOG increases from 3.0 to 6.0 percent of global LNG trade (Exhibit 4). An additional demand of approximately 9.0 mtpa may seem small compared with the total size of the LNG market, though it represents the equivalent of two 4.5-mtpa LNG liquefaction trains. 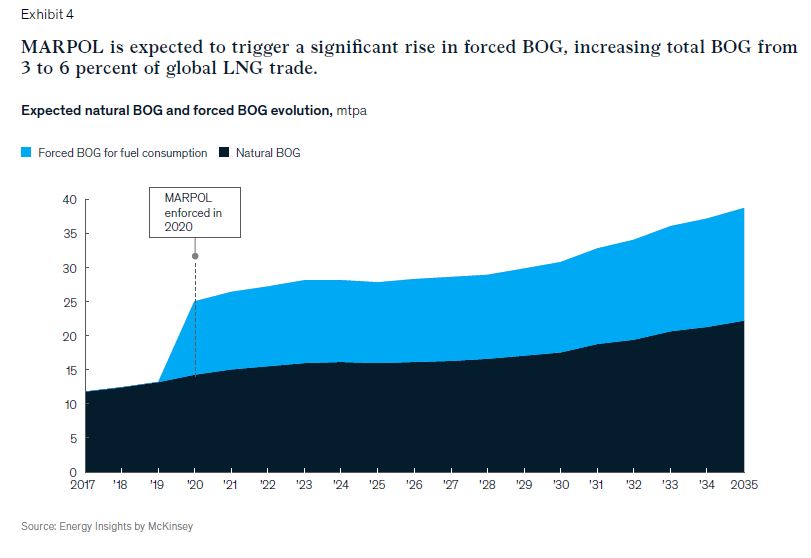 Beyond its absolute impact, which will be significant, this new source of LNG demand may have a greater-than-expected effect on LNG markets. This could be the case primarily because the market squeeze is likely to fall disproportionately on spot cargoes. LNG liquefaction plants typically have a small gap between their maximum production capacity and the commitment to long-term contracts, and they frequently use this gap to produce extra LNG cargoes for the spot market. However, a greater use of BOG will reduce the gap by approximately 3.0 percent, which will significantly influence the number of spot cargoes available to the market. As a result, liquidity and price discovery could be affected, making the market less responsive to imbalances between supply and demand. In the longer term, an increase in BOG will effectively create space in the market for two additional LNG trains.
Source: McKinsey