MAN Energy Solutions successful ME-GI (-Gas Injection) engine has set a new industrial standard for two-stroke propulsion engines aboard – among others – LNG carriers, container vessels, car carriers and bulk carriers. The ME-GI engine provides ship-owners and operators with a peerless solution within environmentally friendly and high-efficiency, two-stroke technology, without the greenhouse emissions such as methane slip that are characteristic of competing engines.

With the ME-GI engine, two-stroke development has taken a step further by combining the unique properties of multi-fuel combustion and the well-known reliability of MAN Energy Solutions ME-engine. The Diesel principle not only provides the ME-GI engine with high operational stability and efficiency, but also ensures 100% stable and reliable operation during load changes on gas with just normal additions of pilot-oil amounts. Furthermore, the ME-GI operational principles features a seamless change-over between gas and diesel operation. The ME-GI engine is the most environmentally friendly, technology available within the two-stroke engine segment. 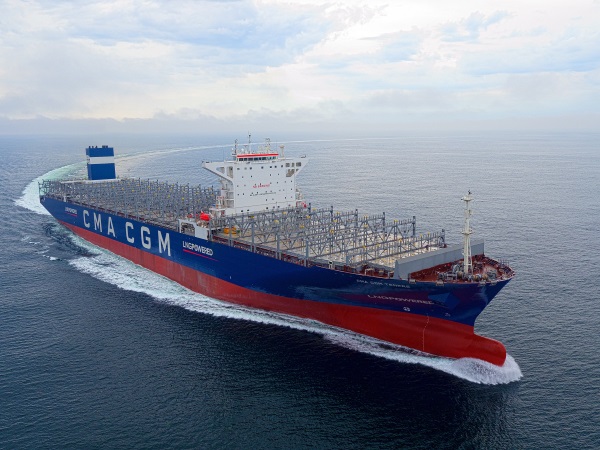 EPS CEO, Cyril Ducau, stated: “The successful gas and sea trials and the on-schedule delivery of CMA CGM Tenere make for an important MAN and EPS milestone. Three years ago, we committed to investing in alternative marine fuels, like LNG, to lead the industry towards decarbonisation and environmental preservation. This commitment included selecting MAN’s high-pressure ME-GI engines, which are highly efficient and, importantly, reduce methane slippage to negligible levels. These vessels will be IMO 2030 compliant years ahead of schedule and will be the cleanest vessels of their category on-the-water today. My sincerest thanks and congratulations to everyone involved in this exciting project.”

MAN Energy Solutions further reports that the engine is the largest and most powerful (MCR 68,640 kW) gas-engine it has produced to date with service experience from ME-GI operators recording a gas-availability rate of greater than 98%, testament to its stability and reliability. The new engine also features a raft of recent, technical developments, including a PVU and Pilot Booster Injection Valve (PBIV), in line with the company’s strategy to increasingly supply more-complete propulsion solutions.

Bjarne Foldager – Senior Vice President and Head of Two-Stroke Business at MAN Energy Solutions – said: “I am delighted to receive the positive reports from these successful gas-trials where testing has proceeded smoothly according to the plan laid for the engine’s entry into service. I am also very encouraged by the reports of good cylinder conditions. The ME-GI engine is mature technology that has accumulated multiple references in multiple segments and is further improved by the introduction of the PVU, which ensures an optimal integration between the engine and supply system.” 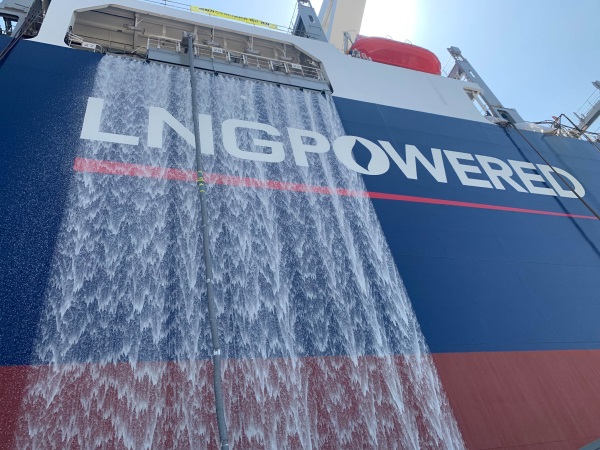 HHI-EMD announced the completion of the shop test for the first of the six ME-GI engines at the end of January 2020. MAN Energy Solutions reported at that time that the engine had successfully run at 100% load in gas mode during testing, capably handling load-changes and maintaining an impeccable cylinder condition.

MAN Energy Solutions reported at that time that the engine – without any need for additional testing – had successfully passed its FAT (Factory Acceptance Test) and performed completely according to expectations, flawlessly handling load-changes and fuel change-overs while maintaining impeccable cylinder conditions.

MAN Energy Solutions states that it has now exceeded 300 references for its dual-fuel portfolio of two-stroke engines – all running on LNG or other, clean fuels such as LPG and methanol – testament to its leadership within this critical market segment. ME-GI operational-hours on LNG alone now exceed the 1 million mark.

The successful EPS gas-trial marks the commercial debut of the PVU8000, the largest PVU ever produced by MAN Energy Solutions and the largest available on the marine market. The unit ensures the reliable flow of LNG through a compact design that – through individual control of the cryogenic pumps (cold-ends) – provides the redundancy required to ensure high reliability at all times.

The engine also features MAN Energy Solutions’ new Pilot Booster Injection Valve (PBIV), which employs smaller or larger atomising holes – depending on fuel mode – to inject fuel into engines. As such, in gas mode, the use of smaller holes significantly reduces pilot-oil consumption to just 1.5%, approximately half of what was previously required; diesel mode employs the larger-sized holes.

MAN Energy Solutions believes that it is time for what it terms a ‘Maritime Energy Transition’ to find clean, decarbonised solutions for seaborne trade and transportation. Essentially, it is the company’s call to action to reduce emissions and establish natural gases as the fuels of choice in global shipping. It strongly promotes a global ‘turn to gas’, driven by the IMO, and a common approach by the shipping industry and politics to invest in infrastructure development and retrofits.
Source: MAN