Meeting the challenge of China’s dash for gas

The People’s Republic of China’s switch from coal to gas, to decarbonize its energy mix and tackle pollution under its Blue Sky policy, requires importing a lot more gas. It needs substantial investment in liquefied natural gas (LNG) terminals, gas storage, and for more and upgraded pipelines to handle and distribute the gas.

As Chinese gas imports grow, the safety challenge for pipeline operators will also rise. Mr Zhou, a manager from a major Chinese pipeline operator said: ”While China is enhancing pipeline interconnection, we need to pay high attention to safety management with zero tolerance for major incidents.”

Government targets drive demand for gas imports
In the first half of 2018, China imported a record 24 million metric tons of LNG, 50% more than in the same period in 2017.1 But there is significant growth still to come. Gas accounts for only 7% of China’s energy mix today, compared to a global average of 22%.2 The Chinese government is targeting increases to take that share to 10% by 2020, and as much as 15% by 2030.

While it plans to boost domestic production of gas, the country also needs more LNG and piped gas imports. Forecasts of how much vary widely, though the consensus is that import dependency will grow significantly. DNV GL’s Energy Transition Outlook model sees imports meeting more than 70% of gas consumption in Greater China in 2040 (Figure 1). 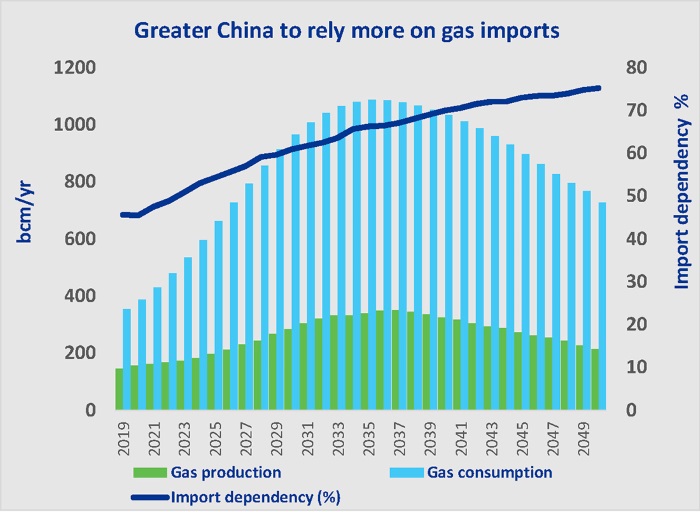 Gulf Publishing’s Energy Web Atlas counted 18 LNG import terminals in operation in China in 2018, with a total installed domestic capacity of nearly 60 million tonnes per annum (Mtpa). Seven were being expanded. The same publication also reported that another seven such terminals will add nearly 19 Mtpa capacity by the early-2020s, with more expected by mid-decade. In addition, China is adding gas storage and contracting LNG carriers to becomes less exposed to seasonal shifts in LNG prices.

The country is also looking to piped imports. BP’s Energy Outlook comments that around half of the additional gas imports that China will require will need to be met by additional pipeline capacity from Russia3 and other Commonwealth of Independent States countries, and the rest from LNG. During 2019, there are plans to create a state-owned national pipeline company to operate all oil and gas pipeline networks. The goals for this organization will include overhauling and expanding China’s national gas pipeline network to extend its reach and reliability.

”China’s plans for LNG facilities and gas pipelines are an opportunity to become leading edge in areas such as asset integrity and safety by applying learnings from expansion projects worldwide,” said Arthur Stoddart, regional manager, China, Korea and Japan, DNV GL – Oil & Gas. ”It is therefore encouraging that China is open to international cooperation to assist it on this journey. We have enjoyed and foresee opportunities to be involved in China’s gas story across the gas value chain.”

DNV GL is already supporting the safety, reliability, and performance of a number of LNG regasificaton projects in the country. Recently, the technical advisor provided independent verification and technical assurance for the LNG processing equipment constructed in China for Russia’s giant Yamal LNG project. It also works with Chinese companies on applying the International Safety and Sustainability Rating System (ISRS™) for best practice in safety and sustainability management.

Scaling up gas will increase the safety challenge
Chinese majors’ focus on safety risk management will be familiar to pipeline operators worldwide. It includes the management of pipeline high-impact areas, including those that are environmentally sensitive; third-party construction damage; and contractors’ construction operations, etc.

As Chinese gas imports grow, and as the government pursues its plan to ensure regional interconnection of oil and gas pipelines4, the safety and reliability challenges will multiply. ”The pressure on securing natural gas supply is high, while the requirements on the reliability of facilities and equipment is even higher,” said Zhou.

ISRS enables safe operations in Chinese pipelines
Over the past decade, ISRS has directly contributed to the continuous improvement of the quality and execution of major Chinese pipeline operators’ management systems. Zhou said: ”It has enabled our company to achieve safe production in those years that we have implemented ISRS. We believe it is a meaningful thing to do.”

To mark the 40th anniversary of ISRS, DNV GL is updating the system to a ninth edition. It is being launched in April 2019 at an event in the Netherlands, with a further event scheduled for China later in the year. ”I hope it can bring further best practice to help us to improve the company’s safety management,” said Zhou.
Source: DNV GL