MENA is set to benefit, overall, from the repercussions of the Russia-Ukraine war and sanctions on Russia at a time when other regions will have dimmer growth prospects, particularly Europe, in addition to higher inflationary pressures. Global markets have experienced a surge in oil and gas prices, and other commodity prices as the outlook for Russian and Ukrainian exports has become increasingly uncertain. This has come when energy demand is quite healthy as the global economy appears to be steering through reduced coronavirus disease 2019 (COVID-19)-related uncertainties and as European countries try to alleviate dependence on Russian energy imports.

In addition to higher energy prices, rising oil production in line with OPEC+ announced quotas will ensure that MENA oil exporters also benefit from a positive quantity effect. Gas demand will also remain strong as European economies seek to reduce dependence on Russian gas imports in the next few years. With rising energy prices and output during 2022, the MENA region’s oil and gas exporters, most notably Saudi Arabia, the United Arab Emirates, Qatar, Kuwait, Bahrain, Oman, Iraq, Iran, Algeria, and Libya, will benefit from rising petrodollar inflows. In this analysis, we focus more on the MENA region’s oil exporters and assess that the rising inflows will benefit economic activity momentum in these oil-exporting countries and lead to higher real GDP growth for the MENA region as a whole in the short term (5.6% in 2022 and 4.2% in 2023). 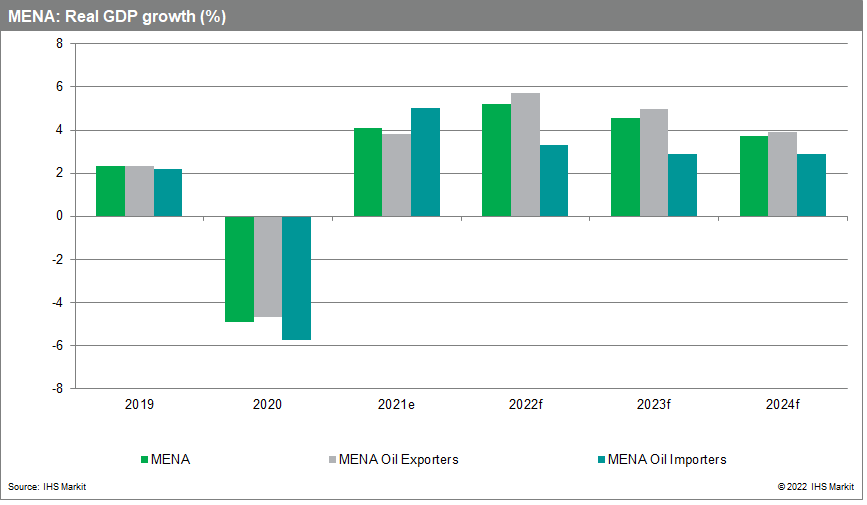 Enhanced petrodollar inflows will feed through to real investment and government consumption spending
The oil and gas windfall is likely to allow for an acceleration of investment spending, particularly on behalf of oil exporters’ governments. New infrastructure and other economic development projects could be announced, leading to higher real fixed-investment spending growth than foreseen prior to the surge in global energy prices. We expect real fixed-investment spending growth in the MENA region as a whole to increase from an estimated 4.5% in 2021 to 8.8% in 2022 and to reach a still high 6.9% in 2023, as per our May forecasts.

Oil exporters’ external and fiscal accounts will receive a boost
Higher petrodollar inflows for MENA oil exporters will translate into ameliorating external accounts for the MENA region as a whole through higher export earnings, while there will be adverse consequences for some oil-importing economies that will suffer from a rising import bill. We forecast that the MENA region’s current-account surplus, on average, will rise from 5% of GDP in 2021 to 10% of GDP in 2022-23.

Similarly, government revenues will, on average, receive a boost from higher energy prices that will lead to a temporary upturn in the region’s aggregated fiscal performances. We assess that the fiscal balance for the MENA region as a whole will move from an estimated deficit of 2.9% of GDP in 2021 to a surplus, the first in almost a decade, of 3.9% of GDP in 2022 and a more moderate surplus of 2.5% of GDP in 2023. This will temporarily ease government-financing needs and will lead to decelerating government indebtedness ratios, on average.

However, higher oil and gas prices might push some governments to delay the introduction and implementation of structural fiscal reforms aimed at diversifying the revenue base, streamlining expenditure, and reducing heavy subsidies. For this reason, authorities should seize the opportunity of higher energy prices and implement long-awaited reforms that will shield fiscal accounts from hydrocarbon price volatility.

MENA cannot escape the spectre of higher short-term inflation
Although real GDP growth will improve in MENA as a whole, driven by its oil-exporting economies, in the short term, the region will not escape higher inflationary pressures. We forecast that average annual CPI growth will reach 9.7% in 2022, before moderating somewhat to 5.5% in 2023. This, in addition to the ongoing US monetary policy normalization, is expected to result in monetary policy tightening by some MENA central banks during 2022.

Although rising average world oil and gas prices benefit MENA’s oil-exporting countries, increasing commodity prices create negative shocks for MENA countries that are large importers of commodities. Egypt, Turkey, Tunisia, Morocco, Yemen, and Lebanon are among the MENA nations vulnerable to the disruption of global grain exports due to the Russia-Ukraine war. Russia and Ukraine are both major exporters of wheat and corn, and some MENA nations have been large importers of Russian and Ukrainian grains in recent years. With world wheat and corn prices having been pushed higher because of disruption to Ukrainian grain production and shipments, rising food prices in some MENA nations pose economic risks from higher food price inflation, as well as being a potential trigger for social unrest.

Outlook
In conclusion, the MENA region will be a net beneficiary of the economic shockwaves caused by Russia’s invasion of Ukraine and the resulting sanctions on Russia. Higher petrodollar inflows will lead to improved fiscal firepower to kick-start investment projects and, consequently, drive higher real GDP growth for MENA’s oil-exporting nations. Although external and fiscal accounts will improve, the region remains susceptible to higher global inflationary pressures and tighter monetary policy from some MENA central banks. Some economies, particularly oil-exporting ones, may be able to afford it and quell upward price pressures by increasing government support. However, others may face higher twin deficits and borrowing costs, given the start of the US monetary policy normalisation process and risks of capital flight from emerging markets. For such economies, the spectre of higher consumer prices raises the risk of socioeconomic tensions and street protests, thereby increasing macroeconomic challenges in 2022.
Source: IHS Markit