Germany’s efforts to cut greenhouse gases to meet European Union target are faltering, creating a a widening gulf between expectations and reality that’s causing some policy makers to seek a quick fix by closing coal plants.

Chancellor Angela Merkel’s government has pledged to cut carbon pollution by 2020 by two-fifths compared with 1990 levels but a new Environment Ministry forecasts show Germany is likely to fall well short of its goals. The gap is fueling criticism by opposition lawmakers who want to cap coal generation.

“Climate protection is at a standstill and we quickly need to begin a pull out of coal in stages,” said Green Party co-chairwoman Annalena Baerbock in a note to Bloomberg. “That’s become obvious.”

The EU’s biggest carbon dioxide emitter managed a reduction of just 28 percent last year and a ministry spokesman said Monday that Germany may reach only a 32 percent cut by 2020. 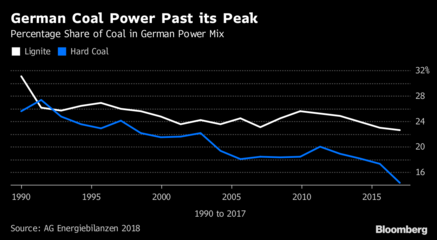 Merkel’s Cabinet, which will sign off on the new forecast this week, has a number of options to curb carbon dioxide emissions. Shuttering coal power may be the most effective means to meet the near-term its climate pledge. Some 120 hard coal and lignite plants emit about a third of all carbon pollution in Europe’s largest economy, according to the Environment Ministry.

The government this month set up an ad-hoc group of 28 experts — dubbed the “Coal Commission” — to map an exit from coal power. The energy sector as a whole must reduce emissions by as much as 62 percent by 2030 compared with 1990 levels, with the brunt of it coming from coal plant closures, according to a June 6 cabinet draft obtained by Bloomberg.

The carbon dioxide target entails halving coal-power capacity, which last year was about 46 gigawatts, according to the Economy and Energy Ministry.

The group, which will meet for the first time on June 12, may consider inducements for closing the oldest hard coal plants or rely on market forces to take their toll, said Stefan Kapferer, managing director of the BDEW utilities federation in a June 4 interview.

RWE AG, Germany’s biggest power generator, plans to retire half of its coal plants by 2030. Power companies reported plans to shut nine plants in the first quarter, according to the Bnetza power regulator.