LPG exports from major Middle Eastern producers in 2022 are expected to increase 6.6% from 2021 as competition for the growing Asian markets intensifies amid expanding supply from other producers, led by the US, traders, producers and analysts said.

Total exports from Qatar, the United Arab Emirates, Saudi Arabia, Kuwait and Iran are estimated to rise to 38.9 million mt in 2022, from 36.5 million last year, the sources said.

Most of these are committed under term contracts, they added, though Qatar occasionally offers spot LPG.

The source said unlike 2021, not many spot offers and exports are expected this year. “Only a few may be seen in the second half of this year.”

An industry analyst projected Saudi Arabia, Kuwait, UAE, Qatar and Oman to raise exports by 1.5 million mt this year, adding that Saudi Arabia is expected to export more in the first four to five months.

But analysts said Iran is expected to boost exports by 1.9 million mt this year.

Iran, whose energy sector has been subjected to US sanctions since 2018 when former President Donald Trump’s administration withdrew from a nuclear pact, aims to bring online 130 million cu m/d of additional gas production capacity in 2022. This includes gas from the delayed phase 11 of the offshore South Pars field and emergency onshore operations as domestic consumption surpasses production, Mohsen Khojastehmehr, managing director of National Iranian Oil Co., was quoted saying by the students news agency ISNA in December.

Between 2018 and 2020, Iran added 3.2 million mt of LPG production capacity mainly from the South Pars gas field and by September 2021 it was projected to add another 2.2 million mt.

Some trade sources said Iranian cargoes have been attractive to Chinese buyers, with discounts steeper than $100/mt to Saudi Contract Prices.

The previous round of Western sanctions in 2012 saw Chinese buyers buying Iranian LPG at discounts of $40-$50/mt, sources said.

Iran and the US are holding an eighth round of EU-mediated talks on salvaging the 2015 nuclear deal, with France’s foreign minister reported to have said Tehran and world powers remained far from any agreement despite making some progress at end-December. Iran has insisted on a long-term agreement, rejecting the possibility of an interim deal.

China imported 7.195 million mt of LPG from the UAE, Oman, Qatar, Kuwait and Saudi Arabia over January-November 2021, down from 9.094 million mt a year ago, Chinese customs data showed.

Imports from Australia, which are making a mark with cargoes from the Ichthys project, jumped 18.3% over the 11 months to 1.204 million mt.

Overall, Chinese imports rose nearly 26% during the period to 22.621 million mt, propelled by demand from the growing propane dehydrogenation sector, comprising 14 plants with combined propylene production capacity of 9.17 million mt/year and requiring up to 11 million mt/year of propane as feedstock at full capacity. 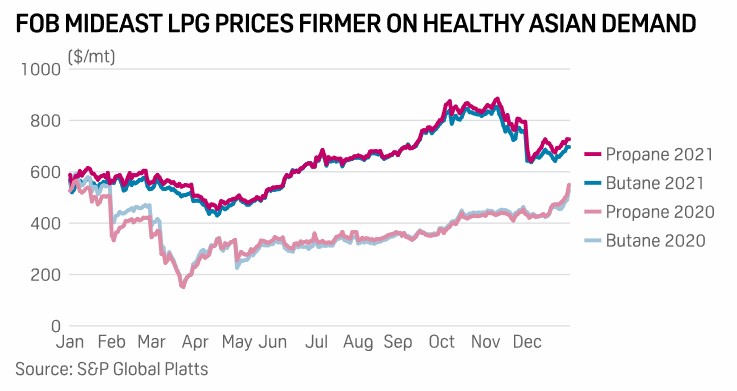 This year, nearly 4 million mt of new PDH capacity is expected, up from 2.5 million mt of added capacity in 2021, industry sources said, with most of the new capacity scheduled to start in H1 2022.
Source: Platts