“Our fleet modelling shows big changes looming in the coming decades. The exact nature of some of these changes is uncertain. Ship owners need to future-proof their ships for whatever happens, which is why we keep improving our model to help them make vessel design decisions that stand the test of time,” says Øyvind Endresen, Environmental Consultant at DNV GL’s Environment Advisory section. “We introduced the concept of the carbon-robust ship in 2017, which in 2018 led to our Carbon-Robust Model in the Maritime Forecast to 2050. The model evaluates the competitiveness of a design compared to that of the competing fleet. In the 2019 edition we have enhanced the model and applied it to nine designs for a very large crude carrier (VLCC). This case study suggests the model could protect a vessel’s profitability, competitiveness and future value.”

A framework for future-proofing ships

The 2018 model offered a structured way to quantitatively assess the future competitiveness of vessel designs. The project team then decided that more scenarios should be explored, including varying trade volumes and fleet growth rates. The updated framework in DNV GL’s latest Maritime Forecast to 2050, in the suite of Energy Transition Outlook (ETO) reports, enables this.

Relevant factors of the future-proofing approach include external parameters such as trade growth and fuel prices, and internal factors such as ship design. Scenarios or designs can be adjusted and the model then reapplied. Key performance indicators (KPIs) could include a vessel’s carbon dioxide (CO2) emissions and a break-even cost, for example.

The future-proofing concept has been tested in a case study involving nine different designs for a hypothetical VLCC newbuild to be delivered in 2020. VLCCs have been defined as oil tankers of 300,000 to 320,000 deadweight tonnage, and the model estimates a fleet of 850 vessels that year. Design variations include fuel types and a vessel’s level of energy-efficiency measures.

The model uses two KPIs to assess competitiveness relative to the competing fleet: break-even rate and CO2 emissions. The Carbon-Robust Model has been applied to calculate KPIs for nine designs in 16 scenarios, i.e. 144 simulations.

Fleet growth rates, technology developments, fuel prices and uptake of alternative fuels have a significant impact on the future competitiveness of a ship design. They are also subject to high levels of uncertainty. All assumptions and criteria are described in the Maritime Forecast to 2050. Suffice it to say here that the scenarios are based on the project team’s views of which future commercial, technology and regulatory developments are realistic. The modeling results are also presented fully in the Maritime Forecast to 2050. Some examples are briefly described below. 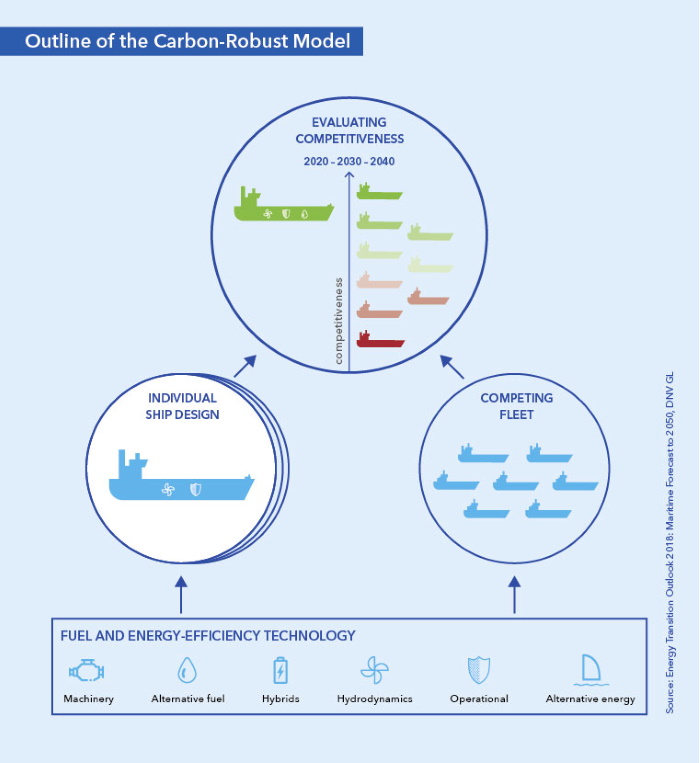 For a given year, the CO2 performance of all ships in the modelled fleet is plotted against a benchmark. The benchmark shows the average CO2 performance required to reach a given emission target such as the International Maritime Organization’s greenhouse gas reduction goals for shipping. Ships with poor CO2 competitiveness fall above the benchmark and will be exposed to carbon risk relating not only to regulations but also to finance and charterers.

Heavy fuel oil (HFO) with exhaust-gas scrubbers performs well economically in both the short and long term. Increasing the energy efficiency boosts competitiveness. However, HFO may not be available in all ports in the future, and there is debate over the environmental impacts of scrubber wash-water. The additional energy required for scrubbers can be an issue under future carbon policies. Competitiveness regarding CO2 emissions worsens throughout operating lifetimes. By 2040 HFO has the highest carbon risk of all fuel types.

Designs with liquefied natural gas (LNG) and baseline energy-efficiency measures perform worse economically than HFO plus scrubbers in 2020. This is largely due to higher capital expenditure needs for LNG, which requires cryogenic tanks. As with other fuels, investing in energy efficiency improves economic competitiveness over the LNG case-study vessels’ lifetimes. LNG competes well on CO2 emissions in 2020 and 2030, but could face competitive alternatives in 2040.

Preventing a vessel from becoming unusable

It may be thought self-evident that failing to future-proof a vessel in the newbuilding phase could eventually leave the ship a stranded (unusable) asset. In a world where evidence speaks loudest, the Carbon-Robust Model generates figures to support this belief.

It finds significant risk that for a vessel built in 2020, the most competitive fuel in early life will not necessarily be the same by the time the ship is scrapped. In what the Maritime Forecast to 2050 calls a “bridging philosophy”, allowing flexibility to switch to another fuel during the operating lifetime of a newbuild would reduce the risk of it becoming a stranded asset.

The multi-scenario approach in the latest Carbon-Robust Model can help build resilience and readiness for changing externalities, and provide input to a robust newbuilding strategy. However, it is worth re-emphasizing that the scenarios described are limited in complexity and variability. Additional parameters could be included to gain even more insight for making informed business or policy decisions.
Source: DNV GL (https://www.dnvgl.com/expert-story/maritime-impact/modelling-the-carbon-robust-future.html)

Previous: Preparations intensify as IMO 2020 global sulphur cap looms
Next: Will 2020 Mark the Return of the Dry Bulk Market to Form?