State of California in the United States is taking advanced measures to prevent air pollution. In particular, according to the California Air Resources Board (CARB) “At-Berth Regulation”, which regulates the emission of exhaust from diesel auxiliary engines on certain classes of ships arriving in California ports in the United States, regulated ships calling in that state are required to reduce the amount of air pollutants (PM: diesel microparticles, NOx: nitrogen oxides, etc.) emitted during their mooring at ports. Regulations began for container ships in 2007, and car carriers are scheduled to be included in the regulations in 2025.

In June 2015, CAEM became the first company to receive CARB approval for its barge-based Marine Exhaust Treatment System (METS-1) which captures air pollutants exhausted from the ship’s stack and treats the exhaust removing all of the required pollutants pursuant to CARB standards. CAEM has been providing their services at the Port of Los Angeles, California, since then, and CAEM is currently the only company providing vessel exhaust capture and treatment services in compliance with the CARB At-Beth Regulation and has successfully serviced approximately 400 vessels with 23,000 service hours, mainly for container ships. In cooperation with CAEM, MOL will join the development of a new system for car carriers, Marine Exhaust Treatment System, METS-3, and will work to prevent air pollution in the area, which MOL vessels calls more than 70 times annually as one of major ports in the United States. 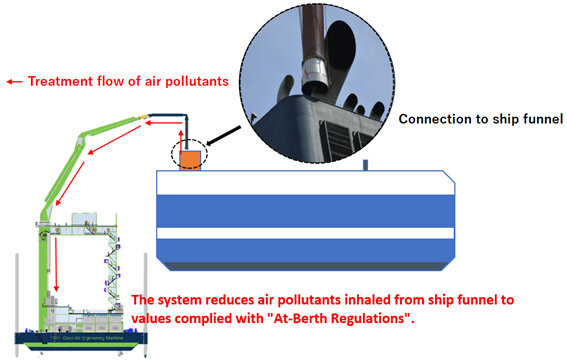 Clean Air Engineering Maritime – President Nick Tonsich, stated, “CAEM is honored to partner with MOL on the latest design and production of our marine exhaust treatment system, the “METS-3″, which will meet the challenges of capturing and treating exhaust from car carriers. MOL is again at the forefront of developing and implementing environmental technologies which eliminate impacts from operations.” 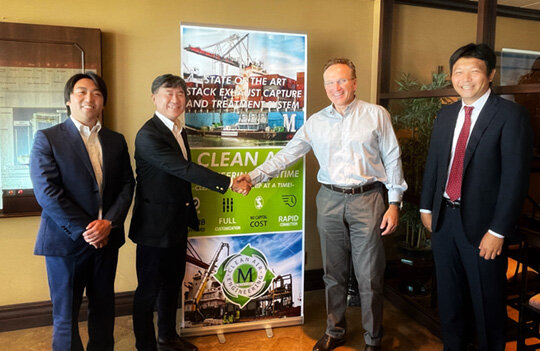 In the “MOL Group Environmental Vision 2.1”, MOL positions prevention of air pollution, protection of biodiversity, and preservation of marine environments as important issues in addition to addressing the issue of climate change. In California, USA, which has advanced environmental regulations, MOL will not only study the use of “Shore power”, to supply power to ships from onshore power sources, but will also promote the development and use of this Marine Exhaust Treatment System as a new means to prevent air pollution, one of our most important issues.
Source: Mitsui O.S.K. Lines, Ltd.