Mitsui O.S.K. Lines, Ltd. (MOL; President & CEO: Junichiro Ikeda) announced an agreement with Tosyalı Holding A.S.(*) (TOSYALI; Chairman: Fuat Tosyalı, Headquarters: Istanbul) to begin the research toward a strategic partnership, and in this respect signed a memorandum of agreement in the presence of H.E. Dr. Hasan Murat Mercan, Turkish Ambassador to Japan, at the Turkish Embassy in Tokyo on August 30.

The companies will study the possibility of a partnership in the transport of raw materials and steel products in Tosyalı’s production networks in Turkey and overseas, building a port in southeastern Turkey and further cooperation on new Tosyalı business ventures. 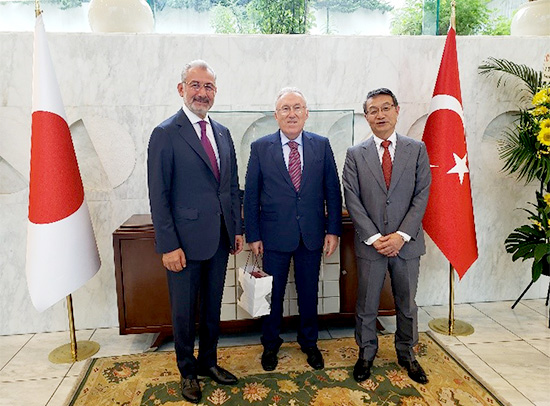 Tosyalı is a major Turkish steel company, with 2018 output of over 10 million tons, and is developing the business on a broad scale both in Turkey and around the world. Last year, the company started operation of world’s largest direct reduced iron (DRI) plant in Algeria. (DRI is an iron produced by reducing iron ore directly, by using natural gas as the main energy source.)

The agreement embodies “comprehensive strengths that enable the provision of one-stop solutions to the various transportation needs of customers,” as stated in the “Rolling Plan 2019” (Note) management plan, and looks forward to contributing to the expansion of Tosyalı’s businesses.

MOL, as a result of this cooperation will strengthen its business structure targeting Turkey and Africa, and continue working to realize stress-free services from customers’ perspective.
Source: Mitsui O.S.K. Lines, Ltd.

2019-09-03
hellenicshippingnews.
Previous: Freight volumes shift to the east coast as companies attempt to navigate the trade war
Next: Gulf tensions are impacting marine insurance rates … but by how much?