In 2019, many central banks in both developed economies and emerging markets reversed the trends of their monetary policies to be more accommodative. The market turmoil experienced at the end of 2018 and the uncertainties related to the trade dispute between China and the US resulted in some deceleration in economic activities and hence called for more supportive monetary policies. The US Federal Reserve cut its main policy rate by 0.75 percentage points (pp) in 2H19. This was in sharp contrast to Fed policymakers’ expectations of a 0.5 pp rise in 2019 at the end of 2018 (Graph 1). With the Fed’s employment and price objectives met, and considering the expectation of a trade agreement, Fed officials anticipate interest rates to remain steady in 2020. 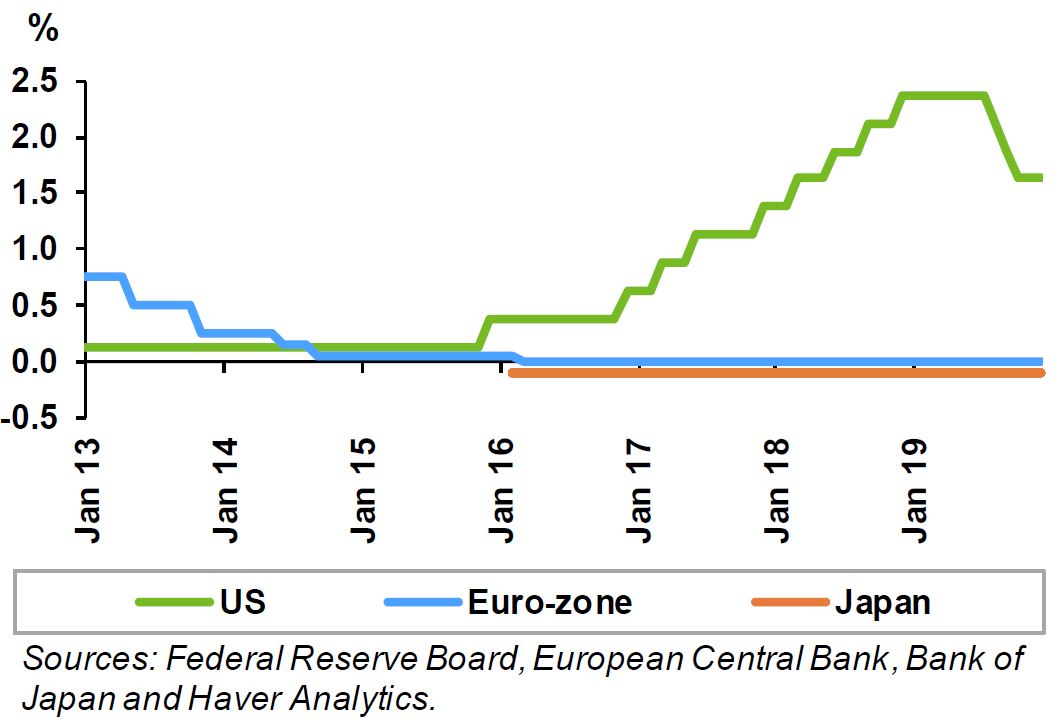 Similarly, other central banks of major developed economies also reversed course. The European Central Bank (ECB), which had stopped its quantitative easing programme at the end of 2018, restarted in November 2019 with €20 bn in monthly asset purchases – with no clear finish line – and cut its deposit rate by 10 basis points to -0.5%. This also ran in contrast to the expectation of a potential rate hike at the end of 2019. The sharp deceleration in the Euro-zone, including persistently below-target inflation readings, has resulted in expectations that interest rates will remain at current levels for the foreseeable future. In Japan, the Bank of Japan (BoJ) has maintained course, extending its asset purchase programme while keeping rates steady. In spite of the continued support by the BoJ inflation readings of close to zero have spurred discussion about the feasibility of reaching its 2% target in a sustainable way. 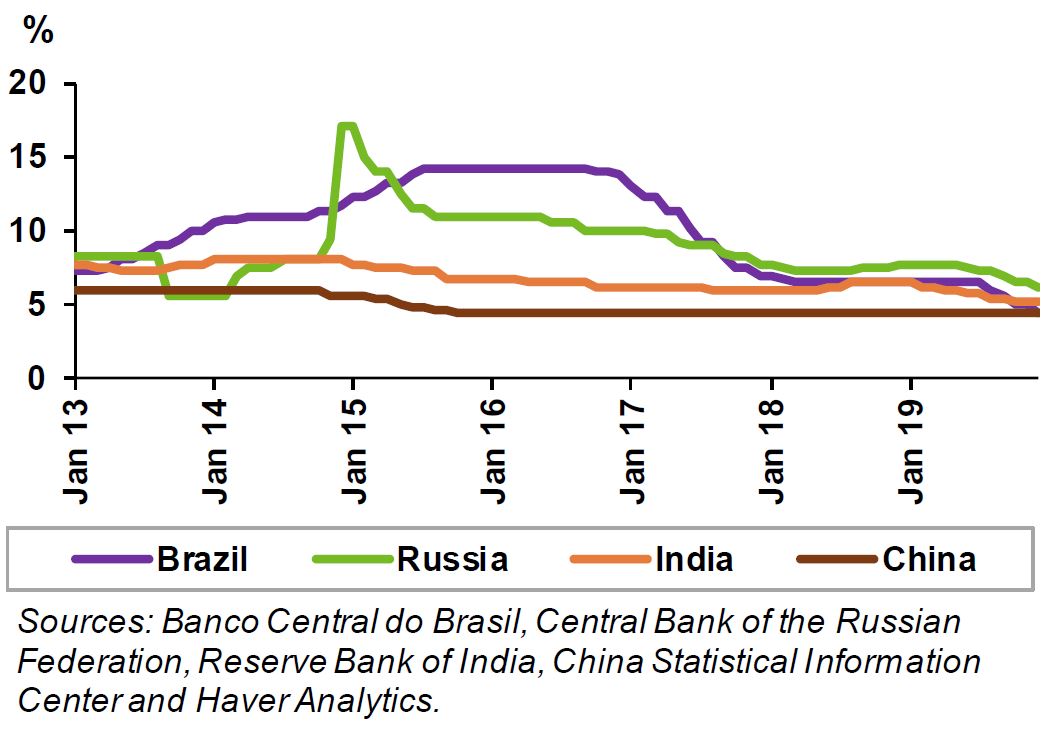 The Fed’s shift to a more accommodative stance gave room for many emerging market central banks to ease monetary policy. Some emerging markets that had experienced significant pressure on their currencies a year earlier reduced interest rates significantly (Graph 2). The Reserve Bank of India (RBI) cut its main policy rate five times – by 1.35 pp in total – amid a significant drop in core inflation readings and deceleration of economic growth. However, the transmission of those cuts to borrowers continues to be limited. In the case of China, the People’s Bank of China (PBoC) reduced the ratio of required reserves (RRR) twice to spur lending, while in January 2020, it has added an additional RRR cut as pressure on the yuan dropped. In Brazil, the Central Bank cut interest rates by 2.0 pp, while Russia cut rates by 1.5 pp, supporting the recoveries in these two economies. The Fed’s monetary easing helped to weaken the dollar in 1H19, while EM currencies were particularly sensitive to trade-related developments – two forces that resulted in large swings in risk appetite.

The low interest rate environment is likely to support economic growth expected at 3.1% in 2020. Moreover, some additional support could possibly come from countries with ample fiscal space, taking the opportunity to borrow at very low rates – or sometimes negative rates – to finance infrastructure projects, which is expected to support the demand for oil. Similarly, the continued accommodative monetary policies, coupled with an improvement in financial markets, could provide further support to ongoing increases in non-OPEC supply. Therefore, the collaboration between OPEC and non-OPEC producing countries participating in the ‘Declaration of Cooperation’ remains essential in maintaining stability in the oil market.
Source: OPEC