Shipyards that build large and complex ships are dependent on accurate project management. New techniques such as artificial intelligence and machine learning make it possible to design more efficient processes by making use of historical data. That is exactly what the Floor2Plan tool developed by the Dutch company Floorganise does, making artificial intelligence a key element of the optimisation process in shipbuilding.

‘The earlier you can identify and resolve risks, the less impact they will have on the entire process. That’s the core idea behind the Floor2Plan tool,’ explains Ronald de Vries of Floorganise. By combining its knowledge of shipbuilding with data science, Floorganise has developed a tool that is able to use historical data to optimise processes.

And this is a crucial step in shipbuilding: a more efficient process helps to reduce person-hours, ensures more effective use of skilled workers, more control over financial project performance, and makes it possible to deliver the right parts at the right time.

Increasingly intelligent through data
Artificial intelligence is powered by data. It detects patterns and uses them to improve its own performance. By adding historical data from the ERP system (e.g. the registered hours), the tool creates an initial ‘customer environment’. It then collects data from the daily registrations of supervisors, subcontractors and operational staff. It is this data that is used to train the algorithm and make predictions about deviations from end dates and budgets. 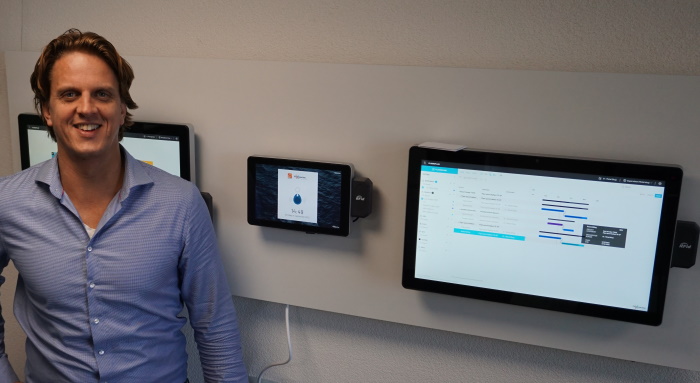 Accurate prediction
‘The predictions of the algorithm are used to revise production standards, develop and optimise processes, and make performance comparisons. The model not only predicts time delays and budget overruns, but also identifies potential shorter times and fewer hours required for specific tasks. In the long run, this produces an accurate prediction for the various activities, spaces and phases within a project,’ says Ronald de Vries.

Divided into products and components
Complex projects are divided into specific products or components such as blocks, rooms and systems. The phases for a block (fabrication, assembly, pre-outfitting) or a room (technical outfitting, functional outfitting) are planned and budgeted in the project plan. ‘This enables us to visualise predicted deviations for all individual components or activities in the plan. For this purpose, Floor2Plan cooperates with widely used IT systems, such as Primavera P6 and MS Projects,’ he says. 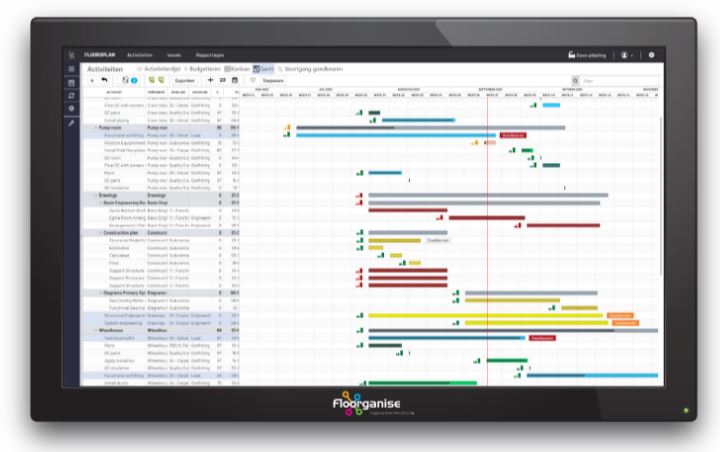 Visual: the user interface showing a regular gantt-chart with predictions in colored signals

Overview and ease of use
Floor2Plan is easy to use. ‘Our users are project managers, planners and contractors in the shipbuilding industry, not data scientists. That’s why a lot of attention has been paid to the ease of use. The ‘back end’ of the programme is very complex, but it is logically laid out at the front end. Using colours and graphs, predictions and deviations are displayed in such a way that you can see at a glance how the entire project, a particular subcontractor, a specific room or phase of the shipbuilding process is going.’