Morgan Stanley has trimmed its growth forecasts for Malaysia and five other Asian countries to take into account the downside risks posed by the renewed escalation in the US-China trade war.

The investment bank cut its gross domestic product (GDP) growth forecast for Malaysia to 4.5% from 4.6% previously. Other countries with trimmed forecasts are India, South Korea, Singapore, Taiwan and Thailand.

In terms of percentage drop, the 0.1% decline projected for Malaysia is much smaller than the 0.6% for Singapore and Thailand.

On the other hand, Morgan Stanley retained its forecasts for China, Hong Kong and Indonesia while revising upwards its forecast for the Philippines.

The investment bank, presenting the revised forecasts in its just-published Asia Economics Mid-Year Outlook 2019, said the recent re-emergence of US-China trade tension and the remaining sticking points in trade discussions mean growth risks are skewed to the downside.

“Near-term uncertainty from trade tension dampens the second quarter of 2019 sentiment and puts a lid on any nascent sign of pickup”, it said.

The trade war between the world’s top two economies escalated last Friday with the US hiking tariffs on US$200 billion (RM832 billion) worth of Chinese goods. US President Donald Trump said Beijing “broke the deal” by going back on earlier commitments made during months of negotiations. 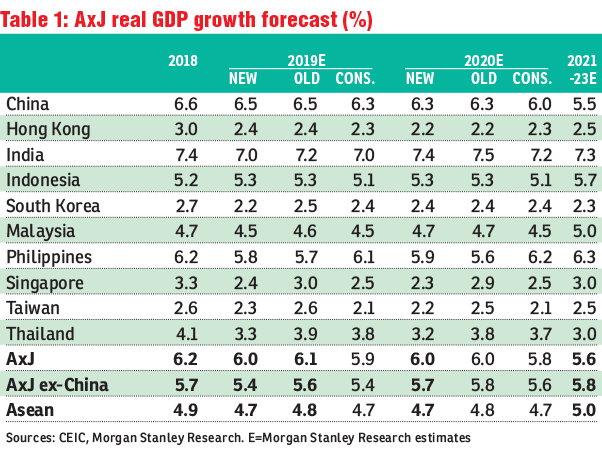 Morgan Stanley also lowered its 2019 GDP growth forecast for the region, with the rate for Asia excluding Japan (AxJ) trimmed to 6% from 6.1%, while Asean was downgraded to 4.7% from 4.8% previously.

“We take into account the lower-than-expected incoming trajectory from the impact that the slowdown in China’s domestic demand has had on AxJ exports so far. [We also consider] other idiosyncratic local factors such as tightening financial conditions in India, weaker-than-expected capital expenditure slowdown in South Korea and policy uncertainty in Thailand,” it said.

Nevertheless, a gradual recovery for the second half of 2019 is still expected, said Morgan Stanley. Though this will in part depend on the duration of the trade tension as prolonged uncertainty will hurt sentiment and impact exports.

“Higher tariffs would lead to a direct impact via export slowdown. But a bigger part of the impact is likely to be indirect, via softer private sector confidence and delayed capital expenditure decisions. Indeed, this indirect impact could get non-linear, if trade tension is prolonged.

“The damage to corporate confidence could get entrenched, spending might not pick up, and a negative feedback loop of weaker global growth and tighter financial conditions could unfold. This appears to be what we underestimated in 2018”, it said.

Looking at the duration of tariffs, Morgan Stanley said, it assumes they will remain in place for a relatively short period of time as continued talks and market weakness prompt both sides to make progress towards a deal.

“A timely resolution (three-four weeks) to the trade tension would limit any private sector fallout, in our view,” it added.

Meanwhile, it said, China’s countercyclical easing is still in place to drive the country’s recovery, which is expected to benefit the rest of AxJ as well.

“Recall that China’s countercyclical policy easing, which is in full swing, is already helping provide a growth cushion.

A US$250 billion fiscal stimulus and widening in the fiscal deficit of 1.75% of GDP has been planned for 2019. This degree of fiscal easing is the most sizeable of all AxJ economies,” it said.

Morgan Stanley said it will also keep an eye on incremental commodity demand in energy-related segments (such as coal) and construction-related materials (such as steel) which will benefit countries such as Malaysia and Indonesia.

“Indonesia and Malaysia are the two net commodity exporters in AxJ and would benefit to varying degrees from the improvements in commodity terms of trade,” it said.
Source: The Edge Financial Daily