More than half of all U.S. motor gasoline exports went to Mexico in 2017. Changes to Mexico’s retail gasoline and diesel fuel markets, combined with low utilization of Mexico’s petroleum refineries, resulted in increased gasoline imports from the United States. Although Mexico is a relatively large crude oil producer, Mexico relies on imports of gasoline from the United States to meet domestic demand. 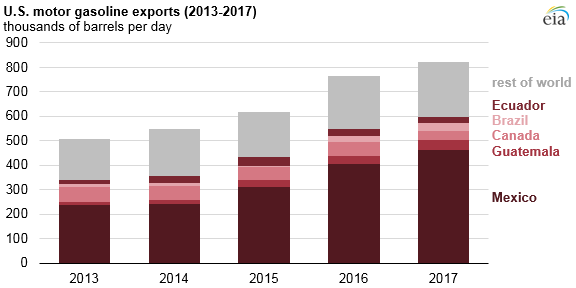 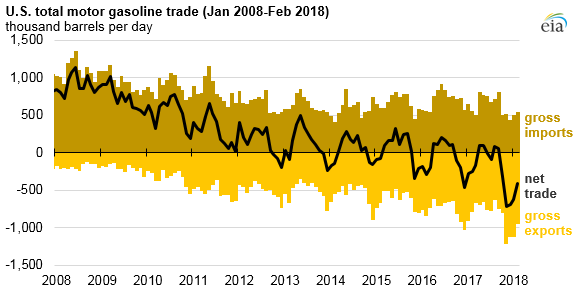 U.S. gasoline imports and exports are highly seasonal. Since 2012, when gross exports of gasoline first exceeded gross imports for several months, the United States has typically been a net importer of gasoline in spring and summer months when domestic consumption increases, and a net exporter in winter months when demand is lower.

Historically, the Gulf Coast (Petroleum Administration for Defense District, or PADD, 3) supplied refined products to other regions of the United States where demand exceeded supply, such as the Midwest (PADD 2) and the East Coast (PADD 1). The Midwest has reduced its need to draw supplies from the Gulf Coast in recent years because refineries are now running at higher rates and increased capacity, allowing them to meet in-region demand. The East Coast still relies on supplies from the Gulf Coast and remains a large net importer of gasoline. 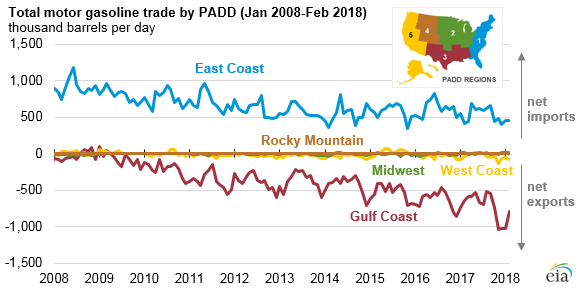 Because of logistical and economic constraints on sending gasoline supplies from the Gulf Coast to other regions in the United States, the volumes of gasoline no longer demanded by the Midwest have become available for export. With the Rocky Mountain (PADD 4) and West Coast (PADD 5) relying largely on in-region or domestic supplies, the balance of U.S. net gasoline imports or exports is between East Coast imports and Gulf Coast exports.
Source: EIA