When the bulk carrier New Journey was put to sea in January 2015, Myanmar was in the depths of civil war.

Clashes between the Myanmar Army and Myanmar National Democratic Alliance Army killed more than 200 people in the early months of 2015, and displaced over 50,000 civilians. The South Asian country hadn’t held an openly contested election in nearly thirty years.

The ship discharged almost 22,000 mt of US-sourced dark northern spring wheat, worth more than $6,900,000. It was the first seaborne bulk shipment of US-sourced wheat in Myanmar’s history. 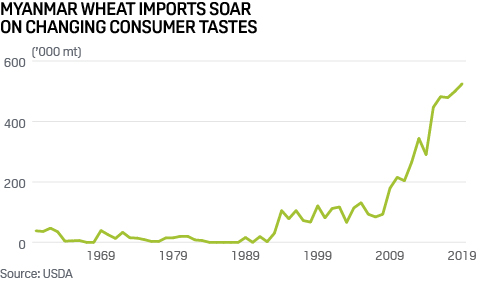 Myanmar’s appetite for wheat is expanding at a rapid pace, and the country is becoming more integrated in global trade and investment more broadly. But ties with the West have been strained by a series of political and humanitarian crises. What does the future hold for this small South Asian nation?

According to the USDA’s Foreign Agricultural Service, the New Journey left Longview, Washington in April 2019 and arrived in Yangon with the cargo of wheat sold by Itochu International to Lluvia Limited – a joint venture between Capital Diamond Star Group and Mitsubishi Corporation.

Lluvia and Kamiguni, a Japanese port and logistic facilities operator, have invested heavily in building the port facility to handle grains for bulk carriers.

“Myanmar has traditionally traded grains by containers,” said JOIN, another Japanese investor in the Thilawa terminal, in a March statement. “However, as the volume increases, it is expected to shift more shipments to bulk carriers and grain silos which would reduce logistic costs on the back of larger volumes.”

Since 2015, the Aung San Suu Kyi-led democratic government has prioritized economic growth and political cooperation with the West. The Asian Development Outlook 2019 forecasts Myanmar’s economy to grow 6.6% in the fiscal year ending in September 2019 and 6.8% in the following year.

As trade links have grown, wheat and grain-based food consumption in the country has increased, in turn stimulating import demand.

According to the USDA, Myanmar’s wheat imports have more than doubled since 2010 and are expected to rise a further 5% on year in 2019 to 525,000 mt, making Thilawa increasingly important to regional importers.

Bumps in the road
There are some hints of caution from Myanmar’s Western trading partners. Both the US and EU continue to suspend all licenses to export defense articles to Myanmar. The EU trades by way of its Everything But Arms scheme, which grants full duty-free and quota-free access to the EU Single Market for all products except arms and armaments.

Recent political decisions by the South Asian country have cooled relations, and raised questions about the government’s stability as a trading partner. State Chancellor Suu Kyi was heavily criticized by Western leaders for her handling of the Rohingya Muslim crisis in 2017. There are also reports that the European Commission is considering a formal review of Myanmar’s access to the single market.

Yet the imports continue, with the USDA reporting that importers have expressed interest in bringing further shipments of US bulk wheat into Yangon later this year.

Wilmar International, a leading agribusiness in Asia, is building similar bulk wheat handling facilities as well as a new flour mill at the Thilawa port. The mill aims to give Wilmar an added advantage over Lluvia, which faces extra trucking costs to transport the grain from the port to its mill further inland.

The Myanmar Investment Commission has permitted Wilmar International to form a local joint-venture – Wilmar Myanmar Riceland – to produce, sell and distribute rice and rice-related products at the Thilawa port in Yangon, according to local media.

The Ministry of Commerce will also allow exports of specific food and commodity items, according to Notification 24/2019 released June 6. The move targets seven items including rice, meat and fish, and value-added crops, with the aim of boosting exports of local commodities in the international market and attract foreign investment into the agriculture sector.

Wheat imports could be just the start of a whole new economy.
Source: Platts