The UK’s first innovative and eye-catching rubbish bin made from recycled plastic and aimed at encouraging people to cut plastic pollution of the seas and oceans will be unveiled in Blackpool next week.

Mayor of Blackpool Amy Cross will join the launch of the bin on World Environment Day, Wednesday 5 June by The GreenSeas Trust as part of Blackpool’s efforts to protect the environment.

The long-term aim of the project is to prevent plastic waste from finding its way into the sea by making the disposal of litter a more conscious act.

The first bin of its kind, it will stand on Blackpool promenade helping keep its beaches cleaner.

GreenSeas Trust hopes other major seaside town councils around the UK will take Blackpool Council’s lead in having a BinForGreenSeas – and in doing so encourage awareness of the state our seas and the urgent need to keep them clean. 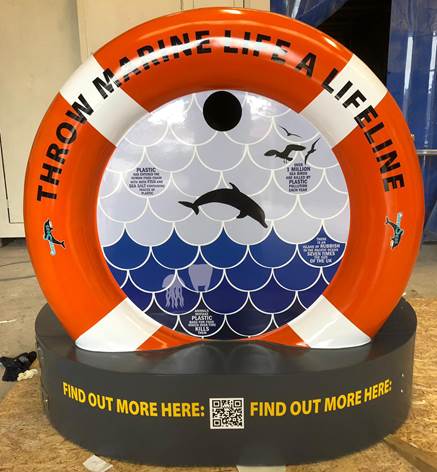 The initiative is led by the London based charity, GreenSeas Trust, whose founder, Fazilette Khan, has spent most of her career as a Merchant Navy officer seeing first-hand how our littering habits have impacted the health of our oceans.

“I have seen the problem of marine plastics grow right before my very eyes. The pristine places I visited early in my career at sea, with their miles of unpolluted beaches and clear blue waters, are now cluttered with plastics and other non-biodegradable rubbish,” she said.

“It’s been heart-wrenching to see the carcasses of marine animals and birds that have inadvertently swallowed plastics, thinking it was food. Or watching as the ship ploughs through a floating island of plastic flotsam and jetsam.

“I could not stand by and watch this continue; I launched GreenSeas Trust in 2003 to spread awareness about marine plastics, changing the mind-set of people, one person at a time. Every one of us can make a positive difference just by putting our litter in the bin.”

The bin has been designed to stand out. At 1.5 metres-high, it’s nautical-themed and brightly coloured. A key component of the bin is using recycled PET plastics – 450 bottles worth. Designed by Emily Hodgkinson and George Davis, from University of East London, the aim was to create something that was itself sustainable and that draws attention.

“Since designing the BinForGreenSeas, I have developed a greater appreciation of the need to protect our oceans and wildlife from the ever-growing threat of plastic waste,” said Emily.

For George, the bin’s sustainability is key. “It’s time for eco-friendly design to become the norm,” he said.

In the UK, 7.7 billion plastic water bottles are used annually. Each day, 700,000 plastic bottles are littered. GreenSeas Trust is proud that Blackpool Council is the first council in the UK to support such an initiative.

With the increased attention on the disaster of plastic waste in the oceans, Fazilette hopes that this growing awareness will help beachgoers connect their own contributions to the wider problem.

“We want using bins to be perceived as a positive action towards helping save marine life,” said Fazilette.

The BinForGreenSeas will make it easy for everyone on the beach to keep it clean, and protect the marine environment for themselves and future generations to enjoy.
Source: The Greenseas Trust