A new mandatory safety code for ships carrying industrial personnel – aimed at ensuring the safety of people transported to work on offshore facilities including windfarms – has been adopted by IMO’s Maritime Safety Committee (MSC 106), which met 2-11 November 2022.

The new Chapter XV of the International Convention for the Safety of Life at Sea (SOLAS) and the associated new International Code of Safety for Ships Carrying Industrial Personnel (IP Code) were developed by the IMO Sub-Committee on Ship Design and Construction (SDC 8).

The aim is to provide minimum safety standards for ships that carry industrial personnel, as well as for the personnel themselves, and address specific risks of maritime operations within the offshore and energy sectors, such as personnel transfer operations. Such personnel may be engaged in the construction, maintenance, decommissioning, operation or servicing of offshore facilities, such as windfarms, as well as offshore oil and gas installations, aquaculture, ocean mining or similar activities.

The amendments and Code are expected to enter into force on 1 July 2024.

The Committee adopted draft amendments to SOLAS chapter II-2, intended to prevent the supply of oil fuel not complying SOLAS flashpoint requirements (60°C), enhancing the safety of ships using oil fuel. The amendments are expected to enter into force on 1 January 2026. 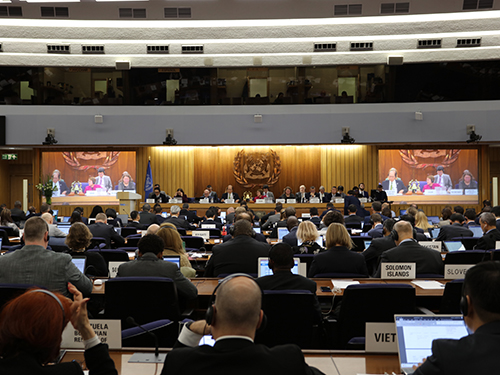 Following consideration, the Committee:
• encouraged the UN Secretary-General and IMO Secretary-General to continue to work on humanitarian efforts to evacuate all stranded ships and seafarers in the conflict area, including efforts to expand the Initiative to other types of ships and additional ports;
• thanked the IMO Secretary-General and the Secretariat for the important contribution to the success of the Black Sea Grain Initiative, in particular the key roles played by the Director of the Legal Affairs and External Relations Division and the Special Advisor to the Secretary-General on Maritime Security;
• noted the success to date of the Black Sea Grain Initiative which had been achieved through an interagency “One UN approach” involving relevant UN bodies, including IMO, other international agencies, NGOs and the Member States concerned;
• emphasized the important contribution that the Black Sea Grain Initiative was making to alleviate the global food supply shortages resulting from the ongoing conflict in Ukraine;
• recalled that the Black Sea Grain Initiative had been recognized by the UN Secretary-General as a landmark agreement to help vulnerable people in every corner of the world; and
• adopted an MSC resolution on Member States’ obligations in connection with search and rescue services under the SOLAS and SAR Conventions in the context of armed conflicts.
Maritime autonomous surface ships (MASS)
The MSC made further progress on the development of a goal-based instrument regulating the operation of maritime autonomous surface ships (MASS). This follows the completion of a regulatory scoping exercise. The aim is to adopt a non-mandatory goal-based MASS Code to take effect in 2025, which will form the basis for a mandatory goal-based MASS Code, expected to enter into force on 1 January 2028.

Unsafe mixed migration by sea – resolution adopted
The Committee adopted an MSC resolution on Recommended cooperation to ensure the safety of life at sea, the rescue of persons in distress at sea and the safe disembarkation of survivors, intended to emphasize the importance of effective and timely involvement of Governments in cases of rescue of migrants at sea by merchant ships.

The MSC approved a revision of the Guidelines on places of refuge for ships in need of assistance (resolution A.949(23)). The draft revised Assembly resolution will subsequently be submitted to the Marine Environment Protection Committee (MEPC) and the Legal Committee (LEG), for concurrent approval, with a view to adoption by the Assembly (A 33) in 2023.

Seafarers’ access to the COVID-19 vaccination and medical care

The MSC urged Member States and international organizations to join efforts regarding seafarers’ vaccinations, following the example of Panama, which offers easy access to COVID19 vaccines to all seafarers.

In the context of reports on the ongoing practice of denying seafarers medical assistance in ports, including dental and optical care, the Committee invited Member States to:
• ensure that seafarers, as key workers, have the right to be treated with dignity and respect, taking into account that they spend most of their time travelling and at sea with a greater degree of testing and regular medical checks than any other person, and are only able to visit the shore for a short time, so a human approach to their medical needs and treatments must be respected; and
• acknowledge seafarers’ key role and facilitate their repatriation, access to medical care and protection in respect of shipowners’ protocols to avoid contagion especially during the gradual relaxation of COVID-19 restrictions.
Source: IMO