Total announces that its first large liquefied natural gas (LNG) bunker vessel has been launched, following the signature of a long-term charter contract between Total and Mitsui O.S.K Lines (MOL) in February 2018.

After delivery in 2020, the bunker vessel will operate in Northern Europe, where it will supply LNG to commercial vessels, including 300,000 tons per year for CMA CGM’s nine ultra-large newbuild containerships in Europe-Asia trade, for a period of at least 10 years.

The LNG bunker vessel’s construction is in line with the International Maritime Organization (IMO) decision to drastically limit the sulfur content of marine fuels as of 2020. In this context, the transition from heavy fuel oil to LNG is a competitive, efficient and immediately available solution for maritime transportation. 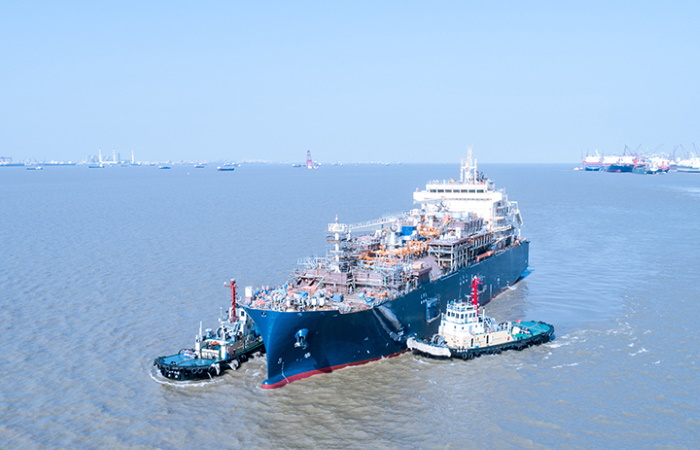 Used as a marine fuel, LNG sharply reduces emissions from ships, resulting in a significant improvement in air quality, particularly for communities in coastal areas and port cities. LNG helps to cut:

“Developing infrastructure like this giant bunker vessel is essential to allow LNG to become a widely used marine fuel,” said Momar Nguer, President for Total Marketing & Services. “This first ship demonstrates our commitment to offering our customers both more environmentally friendly fuels and the associated logistics. Thanks to this pioneering investment, Total is making a positive contribution to the sustainable evolution of global shipping.”

Built by Hudong-Zhonghua Shipbuilding at their shipyard near Shanghai, the bunker vessel is fitted with innovative tank technologies, with a capacity of 18,600 cubic meters, provided by the French company GTT. Designed to be highly maneuverable, the 135-meter-long vessel will be able to operate safely in the ports and terminals considered. Lastly, she meets the highest environmental standards thanks to the use of LNG as fuel and complete reliquefaction of boil-off gas.

Total is the second-largest private global LNG player, with an overall portfolio of around 40 million tons per year by 2020 and a global market share of 10%. With 22 million tons of LNG sold in 2018, the Group has solid, diversified positions across the LNG value chain. Through its stakes in liquefaction plants in Qatar, Nigeria, Russia, Norway, Oman, Egypt, the United Arab Emirates, the United States, Australia and Angola, Total sells LNG in markets worldwide.
Source: Total
2019-10-19
hellenicshippingnews..
Previous: ReCAAP ISC 3rd Quarter Report on Piracy and Armed Robbery against Ships in Asia
Next: VPS launches Automatic Test Method for Wax Appearance temperature of VLSFOs