The marine market is in the process of becoming “greener” and more environmentally friendly. The major drivers are ballast water treatment regulations, tighter regulation of pollution from exhaust gasses and a move towards using LNG as fuel. For ship owners to come out on top of this key transition it is important not to forget the important role nitrogen plays – and will play in the future. “By using an Oxymat nitrogen generator instead of a combustion-based technology to produce inert gas onboard ships is ready for future regulations and can also transport a wider range of products. Nitrogen can be used in the process when treating ballast water – to inhibit corrosion in the piping system. If a ship is having a ballast water system installed in drydock – this would be a great time to install a new nitrogen generator. LNG-fueled vessels use small quantities nitrogen for safety purposes in the GVU. Why not use nitrogen for all inerting and padding purposes? With an Oxymat´s PSA nitrogen generator you can produce high purity nitrogen. The compressed air for the nitrogen generator can even be utilized as working air and has a dew point of minus 20°C”, said Jesper Sjögren, Oxymat’s CEO. 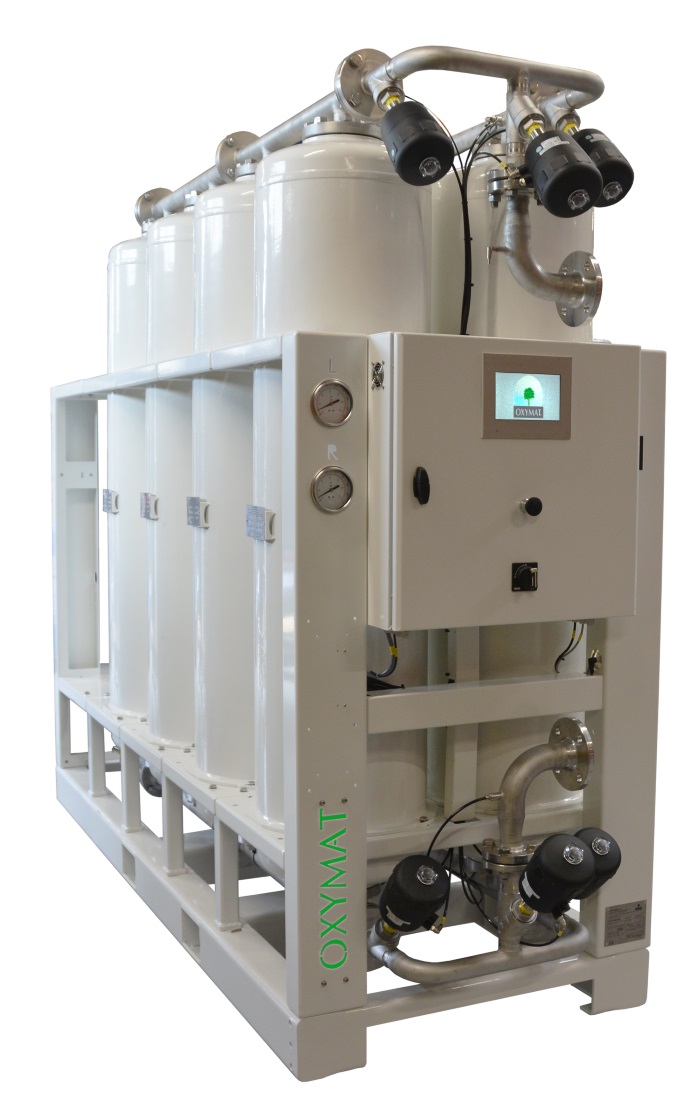 What do you save by installing Oxymat nitrogen generator?
• Low OPEX (operational costs)
• The fuel an IGG system uses
• An air compressor
• Changing of membranes

Oxymat has supplied more than 180 PSA nitrogen systems to the maritime industry total production capacity is more than 38,000 Nm3 . Nitrogen with a max of 5 % oxygen content is widely used, production costs are 0.18 kW/Nm3 nitrogen, this means by installing an Oxymat nitrogen generator onboard ships is more than 35 % cheaper in energy consumption than membrane systems.

Increasing demand for on-site nitrogen onboard ships
In 2017 the Denmark based company Oxymat had experienced a rise in demand of nitrogen packages for chemical carriers by 60 %. The main reason to this demand is ship owners’ need for low OPEX (operational costs). PSA technology requires less compressed air at a lower pressure thereby decreasing the size of the needed compressors. To meet the increasing nitrogen demands on the PSA market Oxymat decided to update their design and production drastically, which resulted in a game-changing development of a new marine nitrogen generator. The new nitrogen generator will be launched at SMM, the leading international maritime trade fair in Hamburg, Germany on September 4-7, 2018.

How does the new nitrogen generator benefit ships?
• Power consumption is +35% lower than membrane systems
• All pipe sets and valves are made from stainless steel
• All pressure vessels are made from sandblasted and powder P265 in C4 grade for extended lifetime
• The system is modular and can be expanded if capacity demands change
• Outlet pressure from 5 bar(g) to 9 bar(g)
• Purity from 95% N2 to 5 ppm O2 content

Due to a high demand for the new marine nitrogen models, Oxymat has already sold more than 100 units. Some examples of sold installations are gas carriers in Korea, platform supply vessel in Turkey, oil/chemical tankers in China and Taiwan and many more.” As being the largest manufacturer of nitrogen PSA system in Europe, it is our obligation to bring the most innovative technology to the maritime industry. We have invested heavily in this new design, and I am happy to see, it is well received among ship yards and ship owners worldwide”, said Jesper Sjögren, Oxymat’s CEO.
Source: Oxymat