Maritime activity over the next decade will be dominated by unmanned surface and underwater vessels, according to a report on the future of autonomous maritime systems launched today.

Written and researched by Lloyd’s Register, QinetiQ and the University of Southampton, the report is a follow-up to Global Marine Technology Trends 2030, looking at how technology trends will impact upon the regulatory and social aspects of maritime operations.

Tim Kent, Technical Director, Marine and Offshore, Lloyd’s Register, said: “Networks of autonomous surface and underwater vessels are set to radically change the nature of maritime operations. Developments widely reported in the media, such as those in autonomous shipping, are happening with greater pace than expected as little as 2 years ago. These developments enabled by technology provide new opportunities and potential for disruptive business models. However, the principal challenges will be the integration of these autonomous systems into current maritime operations, legal and regulatory requirements, and not least the impact upon seafarers.” 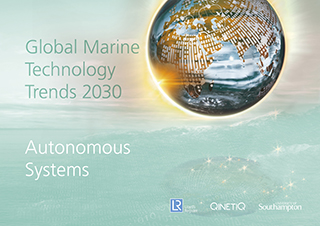 Bill Biggs, Senior Campaign Leader for Autonomy, QinetiQ, said: “Technological advances in consumer and adjacent markets are a real opportunity for the maritime sector. Applied artificial intelligence, low cost low size sensors, increased connectivity, improved cyber security and better energy management are all likely to drive rapid and disruptive change. Trials already undertaken by navies and transport companies demonstrate the opportunities that autonomous maritime systems present. In 2016 QinetiQ supported Unmanned Warrior, the largest demonstration of its type ever conducted, running as part of a major multinational naval exercise. It’s just one example of the steps the UK is taking to keep up with the accelerating pace of change.”

Professor Ajit Shenoi, Director of the Southampton Marine and Maritime Institute at the University of Southampton, said: “The report recognises that autonomous systems and associated technologies will require people to learn to work seamlessly with them. Crew members of the future may become shore based, managing vessels remotely from the office or the sea, creating the need for new training and skillsets. The potential for the command and control to be geographically displaced from the vessel will also require behavioural and cultural changes within the maritime community.”

David Dingle CBE, Chairman of Maritime UK said: “I’m delighted that this timely and thought-provoking report is being launched during London International Shipping Week, demonstrating the UK’s preeminent role in cutting-edge innovation and thought leadership for our global industry. This thought leadership from three world-leading companies and educational institutions, coupled with exciting developments from leading manufacturers such as Rolls Royce, ASV and a wealth of small and medium size players, mean that the UK, the world’s maritime centre, really is leading the autonomy revolution.”
Source: Lloyd’s Register