Newbuilding: 2022 Starts With a Bang

Newbuilding activity was elevated during the first week of 2022, in what could be a positive sign for the rest of the year. In its latest weekly report, shipbroker Allied said that “a strong start took place for the newbuilding market during the first few days of the new year, given the plethora of fresh projects coming to light as of late. At this point, we see a hefty boost in the gas sector, with numerous new orders emerging, the majority of which are being placed at Chinese Shipyards. At the same time, the containership market had a firm presence as well, underlying once again the current bullish sentiment still surrounding this market. On the other hand, we failed to see any new orders either from tanker or dry bulker sectors, which are usually some of the main contributors in nourishing the overall newbuilding market. It is true that in the tanker market the prolonged bearish view noted from the side of earnings, coupled by the higher newbuilding prices as of late, has considerably disrupted overall buying appetite. In the dry bulk sector though, given the good overall sentiment that is still present, we can expect a more robust trend to develop in terms of the new order flow in the near term”. 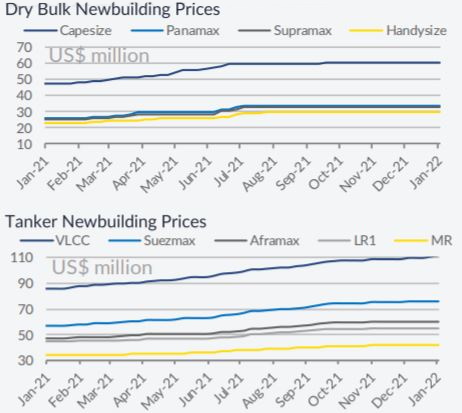 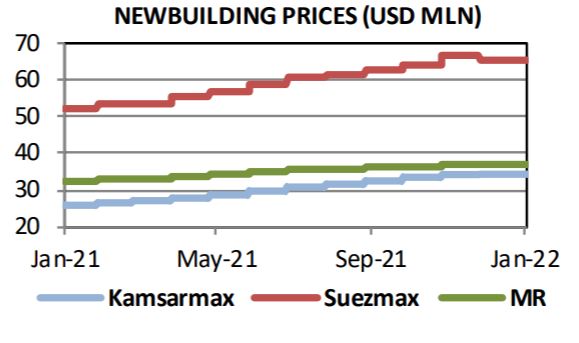 LNG 1x 174,000 cbm at Hyundai Samho for delivery in 09/2024 at a cost of $217.9 million (SK Shipping)”. Finally, in the container market, “Capital Maritime & Trading have inked for three more 1,800 teu (gearless, LNG-ready) container vessels with Korea Shipbuilding & Offshore Engineering (KSOE) at around $32 mln each. Deliveries begin in 2023. The total numbers of ships on order are 9 now”. 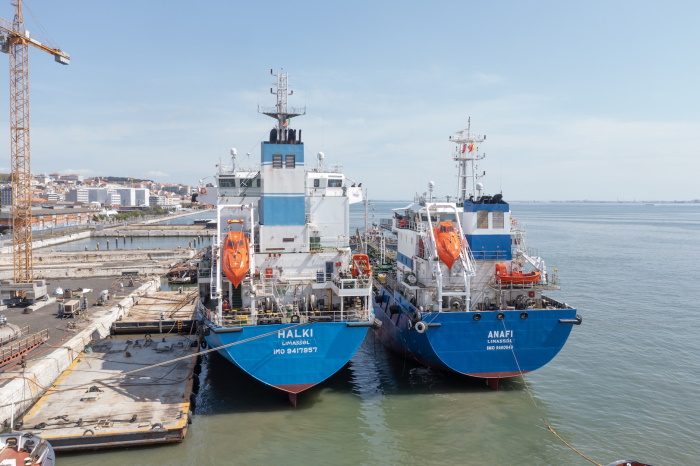 Meanwhile, in the S&P market, Allied noted that “on the dry bulk side, a modest start took place in the SnP market, given the fair number of units changing hands during the first few days of the year. We already see that buying appetite is firm, while being relatively fairly distributed across the different size segments and age groups. Given that we are only at onset of the year, a lot will depend on how things develop from the side of earnings in the near term. To be more precise, as to whether we are about to witness a continuation of the robust momentum, similar to that took place during the previous year or so, or if things are on the verge of a shift. On the tanker side, it was a relatively strong start in terms of activity taking place. We have repeatedly mentioned that given the current freight market regime, we can hardly expect any sort of balance in the SnP market as well for the near term (at least). However, given the recent trend noted, we may well being amidst a more sustainable path with an improvement to be noted during the course of the year”. 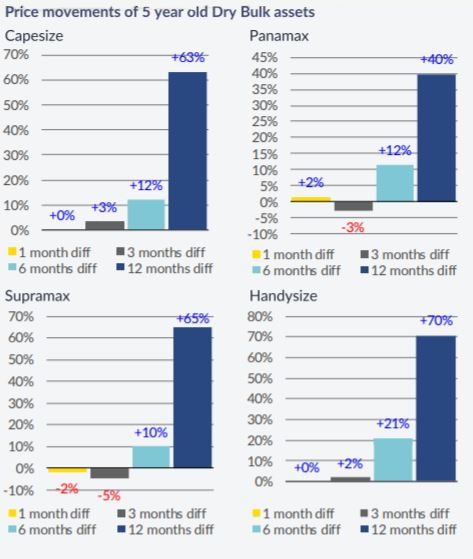 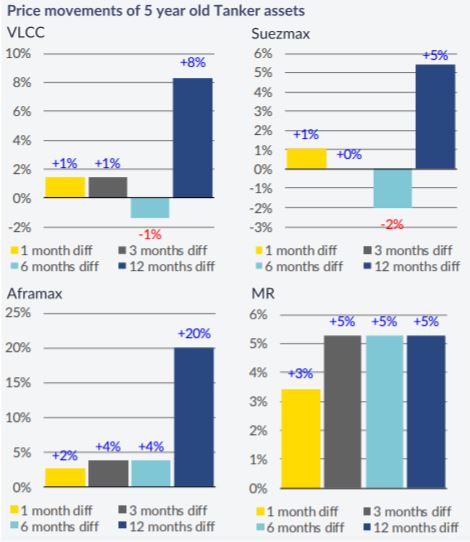 Banchero Costa added that “the interest stayed high despite the end of the year with bulkers in the headlines. The most interesting sales have been Kamsarmax ‘Scarlett Albatross’ abt 82,000 dwt 2015 Tsuneishi has achieved $31.5 mln from Greek buyers. Panamax ‘SCORPIO’ abt 75000 dwt 2012 Sasebo has achieved $23.55 mln from Castor Maritime, delivery with DD freshly passed and BWTS fitted. Ultramax ‘IKAN SENYUR’ abt 61500 dwt 2010 Shin Kasado has been bought by Vietnamese buyers for $22 mln (BWTS fitted). Supramax ‘TANIKAZE’ abt 56000 dwt 2013 Minaminippon has been sold to undisclosed buyers for $23 mln. 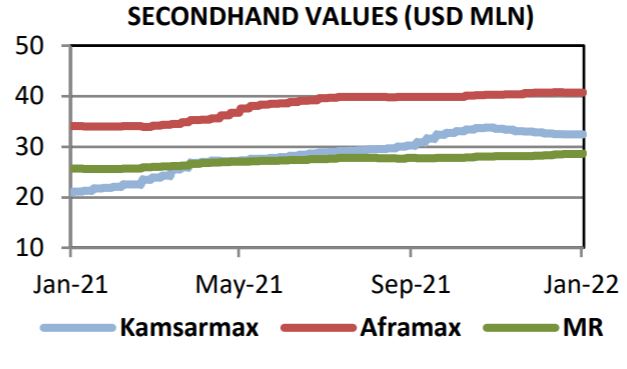 In the tanker market, “the markets remain weak, but optimism for a new cycle, possibly beginning this New Year, is driving demand, with several interesting deals registered in the last two weeks. Among those was a block of two LR2 ‘PROSTAR’ and ‘PROSKY’ abt 115640 dwt 2019 Daehan sold for 52 mln each with a TC attached (we understand 6+6 months) to Shell”, the shipbroker concluded
Nikos Roussanoglou, Hellenic Shipping News Worldwide