The newbuilding market has been moving in full swing over the past few weeks and the previous days were no exception to the rule. In its latest weekly report, shipbroker Banchero Costa said that “despite the summer and a strong first half of the year, the new building market remains strong, with few signs of a slowdown. The main focus of buyers is still on Container vessels, Sinokor Merchant Marine exercised eight options for 1908 feeders making his order at Hyundai Mipo rise up to 12 ships. Moreover Navios Shipmanagement has made an order of four plus four 5,300 TEU feeders at Zhoushan Changhong at $61.6 mln each. Finally CMB Leasing, Belgium ordered two 16,000 TEU from Guangzhou Shipyard. Both the vessels will be chartered by MSC for long period. In the bulk carrier sector, Wisdom Marine Lines decided to add to his fleet four more 40k handy bulk carriers that will be delivered during the second half of 2023. Imabari and Namura will build two ships each for a price of $29 mln each. In the Chinese market, it should be noted that Nishin Kaiun decided to exercise options for five kamsarmaxes at $27 mln. This week relevant orders were reported also in the LNG sector. Knutsen OAS, Norway added three new orders for 170,520 cu.m. LNG carriers at Hyundai Samho for a price of $186.4 mln with delivery starting from the beginning of 2024. In the end it was a good week also for tanker market, Vista Shipping decided to exercised two options for two LR2 at Guangzhou shipyard International, China, the ships will be employed by Total for long period. It’s also to be registered the first order at K Shipbuilding, South Korea (ex STX Offshore & Shipbuilding) done by Sinokor for six 50,000 dwt MR2. The price will be $36.5 mln for each ship and all the vessels will be chartered to ExxonMobil for long term”, Banchero Costa said. 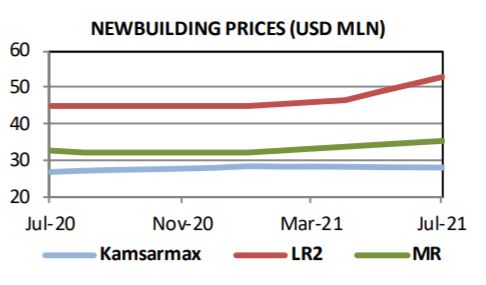 In its latest weekly report, shipbroker Clarkson Platou Hellas added that “in tankers, the Yards long term existing customer clients of Samos Steamship have ordered two firm 115k dwt Aframax tankers at Sumitomo Shipyard. Both vessels are reportedly LNG ready and will be delivered in 2Q and 3Q of 2023. In the dry bulk market, the biggest news came from Beihai shipyard, who announced contracting two firm plus two optional 210k dwt Newcastlemax’s with Bocimar, with delivery of the firm vessels set for 2023. Hantong announced that Nisshin Shipping declared five optional 82k dwt Kamsarmaxes, bringing the series to ten overall, with delivery of the vessels expected within 2023. Shanhaiguan contracted two firm 85k dwt Kamsarmax with Huachen Leasing, set to be delivered within 2023. It was reported that Zhejiang Xinyihai Shipping agreed to two firm domestic trading 57k dwt Supramaxes at Haitong Offshore Engineering, with a further option to be declared and delivery of the firm vessels set for 1Q and 3Q 2023.

Wisdom Marine revealed orders for two sets of 40k dwt Handysizes, ordering two firm 40k dwt Handysizes at Namura Shipbuilding, with delivery expected in 2023 and 2024. They also ordered two firm 40k dwt Handysizes at Imabari Shipbuilding, again delivery of each vessel is set for 2023 and 2024. In gas carriers, just the one order as Samsung revealed contracting a 174k CBM LNG Carrier from an unknown owner, with delivery set for 2Q 2024. In containers, GSI Nansha revealed taking order for a further two firm 16,000 TEU vessels from CMB Leasing for charter to MSC, with delivery of the vessels to take place within 2024, bring the series to eight overall. Yangzijiang announced contracting ten firm and five optional LNG dual-fuelled 7,000 TEU boxships with Seaspan Corporation, set for delivery from 4Q 2023 and will continue to run throughout 2024. Clients of Navios ordered four firm and two optional 5,300 TEU vessels at Zhoushan Changhong, with delivery of the firm vessels expected through 2H 2023 and 1H 2024”, Clarkson Platou Hellas concluded. 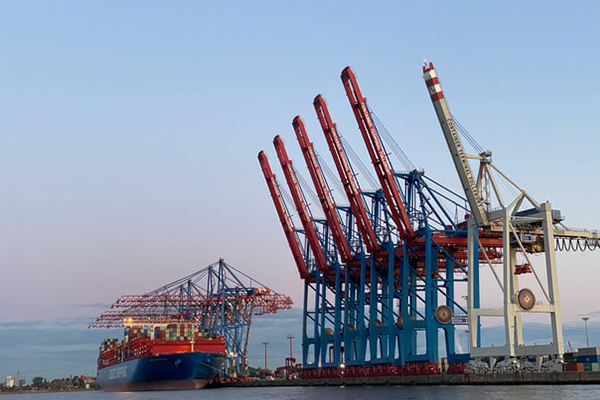 Meanwhile, in the S&P market, shipbroker Banchero Costa said that in the dry bulk segment, “during this week the second hand activity was mainly focus on bulk carriers. Two capesizes Stella Lucy and Stella Laura (180k blt 2015 Qindao Beihai) were sold respectively at $38 mln and $36.5 mln; in both the transactions was included a TC back one of which index linked. Post-panamax Dyna Camellia (91k blt 2007 Imabari – BWTS fitted) was sold to Chinese buyers at $17.5 mln. Kamsramax Trans Africa (81k blt 2017 Hudong) was sold at $31 mln. Panamax MG Sakura (75k blt 2006 Universal – BWTS fitted) was sold at $18 mln. 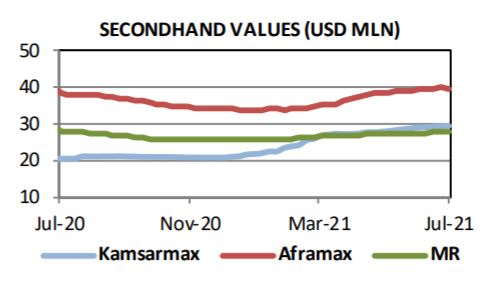