Newbuilding activity has picked up pace during the course of the past week. In its latest weekly report, shipbroker Allied Shipbroking said that it was “a rather positive week for the newbuilding market, with a limited though number of fresh orders coming to light. More specifically, in the dry bulk sector, activity was narrowed to the Kamsarmax size segment, with a single (but strong) 4 + optional 4 order being placed. Partially at least, this can be attributed to the downward pressure of late in terms of freight earnings, with potential buyers being rather hesitant to any big commitment in this sector at this point. A lot will depend on how things evolve during the final quarter of the year. Notwithstanding this, the tanker sector was in complete regress, with zero fresh deals being reported. On the other hand, the gas sector had an astonishing week, especially for high spec LNG vessels. All-in-all, given the fragile status in shipping markets since the Coronavirus outbreak, it is difficult to see any positive balance developing soon. Hopefully, the negative correction in asset price levels will start to incentivize some to invest towards this direction in the near term”. 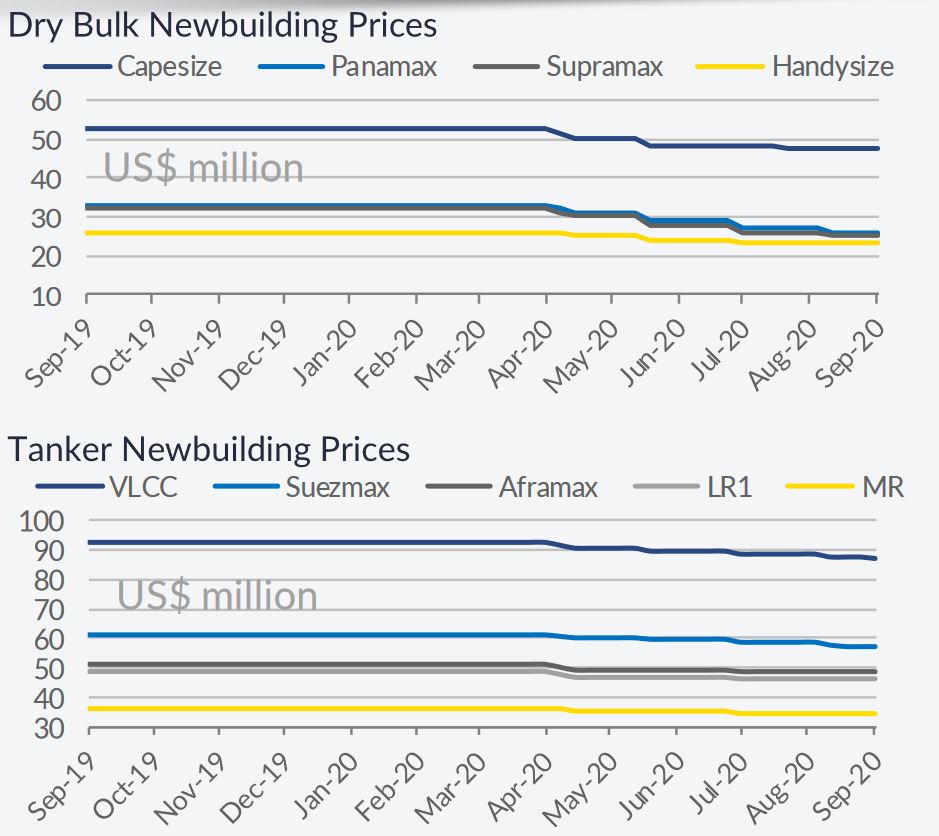 In a separate note, Banchero Costa said that “the week was rather quiet in terms of concluded orders: it is worth to report that China Mingsheng Trust placed its first ever newbuilding order for a series of 4 + 4 x SDARI 82,000 dwt units (wide beam / shallow draft) at Chengxi, China for delivery throughout 2022, at $28 mln each and the project is backed by a charter employment which already in place with the grain trader COFCO International. Additional minor business was recorded within China for 2 x 4,100 dwt mini bulk carriers: unknown (but local) buyers have inked such an order with Lixin Shipyard for delivery in 2021 for cabotage trade”, the shipbroker said.

Meanwhile, in the S&P market, Allied added that “on the dry bulk side, a fair boost in the SnP market was noted as of the past week, given the strong number of units changing hands. At this point, we see movement across all main size segments, suggesting a rather equally shared buying appetite in the sector. Notwithstanding this, activity seems limited for more vintage units, for the time being at least. All-in-all, on the back of a more bullish sentiment and freight returns during the final quarter of the year, we may well see a more vivid SnP market taking shape in the coming months. On the tankers side, activity seems to be in a mediocre state over the past few days or so. The uninspiring track from the side of earnings can be seen as one of the main culprits for the softened appetite of late. During the past week, we saw volumes concentrated on the medium to smaller size units, as well as, of age older that 15 years. For the coming period, a lot will depend on how realized returns respond as we approach the end of the year”. 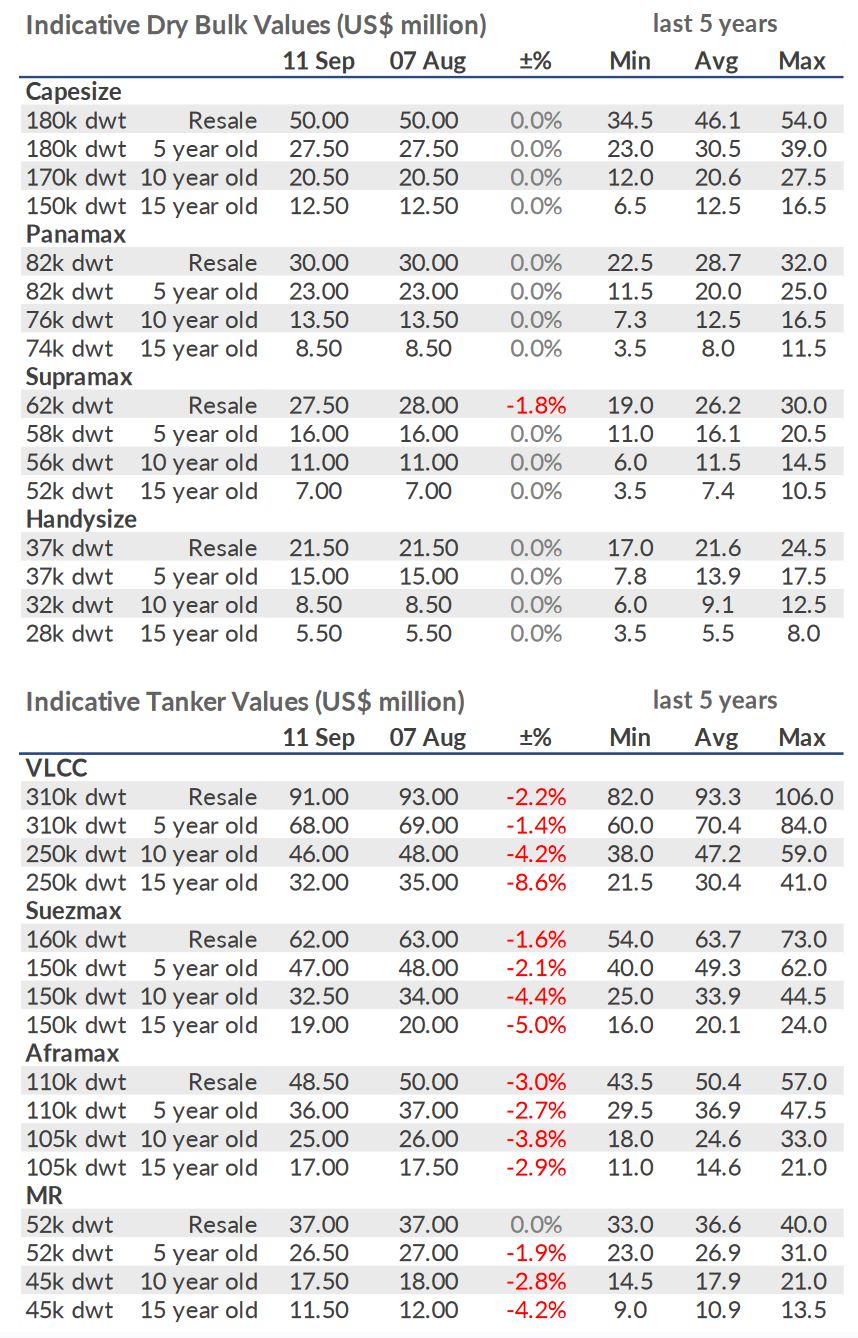 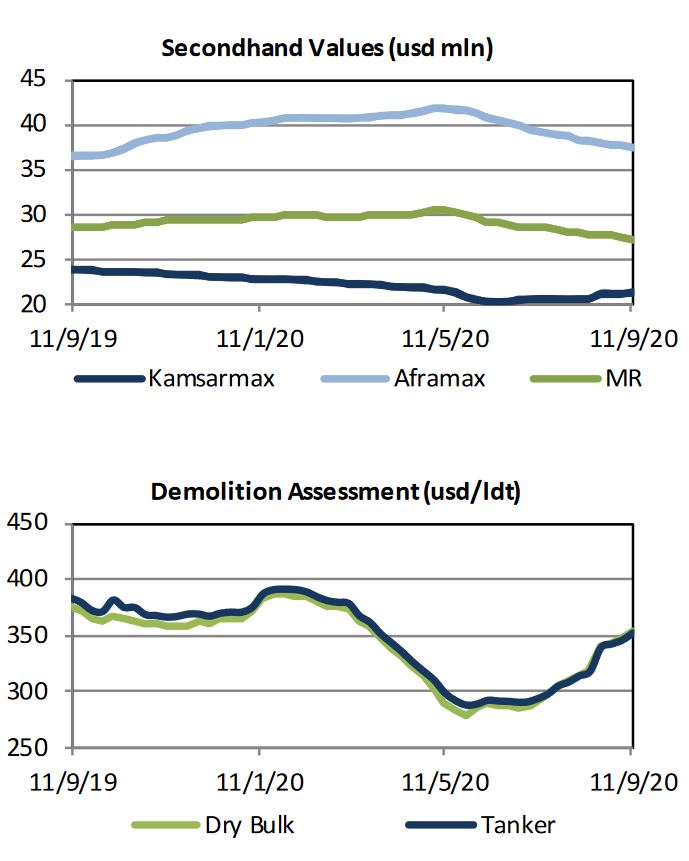