As a traditional summer lull is on its way, ship owners are firming up their interest for newbuildings. In its latest weekly report, shipbroker Allied Shipbroking said that it was “an interesting week for the newbuilding market, with several fresh deals taking place during this past week. In the dry bulk market, we noticed a renewed interest for Capesize units, as two new orders were placed for a total of 10 units, all at Chinese shipyards. Meanwhile, we saw orders in the smaller size segments as well. The robust sentiment is still apparent in the market, while freight earnings continue at very attractive levels. Given this, interest has ramp up significantly since the beginning of the year and we expect more deals to come to light these coming weeks. However, the significant rise in newbuilding prices is likely to curb some this appetitet. In the tanker market, it was another week of lackluster activity, nourished by the discouraging freight scene and the lack of fresh demand in the oil markets. At the same time, newbuilding prices have posted a significant rise here as well, further trimming any potential interest from the side of buyers. A change in trend is expected to be seen only after the market fully enters a recovery path, something that still looks fairly likely to be seen at some point later in the year”, the shipbroker said. 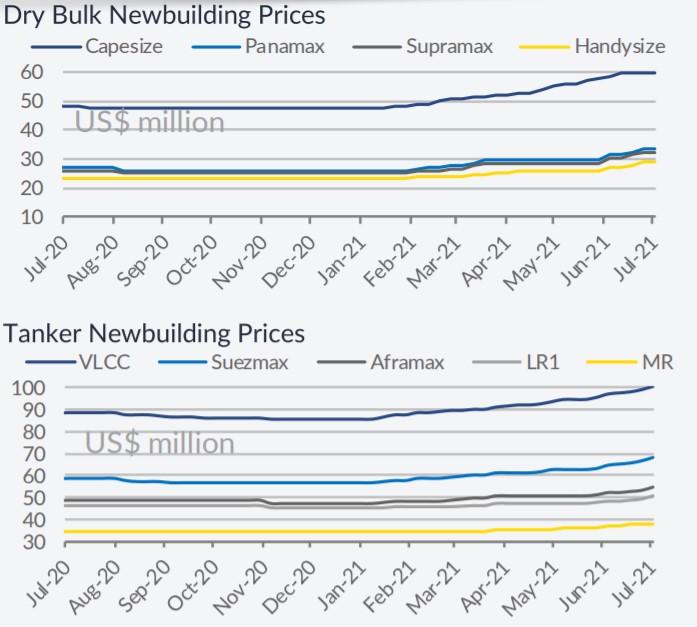 Similarly, shipbroker Banchero Costa added that “Cosco Shipping has placed an order with Cosco Shipping Heavy Industry ( Yangzhou) for 6x 14,092 TEU and 4x 16,180 TEU container vessels, with prices of $146 million and $155 million per unit, respectively, with vessels scheduled to be delivered between the end of 2023 and the end of 2025. Chellaram Shipping has signed a contract with Chengxi Shipyard for a 1+1optional Kamsarmax (abt 82k dwt) to be delivered in the second half of 2022. Vessels will be Tier III, with a reported price of $31.5 million. Wallenius also ordered 2+2+2 6,500 CEU car carries from Yantai CIMC Raffles. The vessels will be dual-fuel and priced at $75 million each. In the gas segment, Hyundai Samho received an order from Japanese owners Nissen Kaiun for 2x VLGC (abt 86k CBM). Vessels will be delivered in the second half of 2023 and will be dual fuel. They will be employed in a 10-year TC contract to Eneos Ocean and Dorian LPG”. 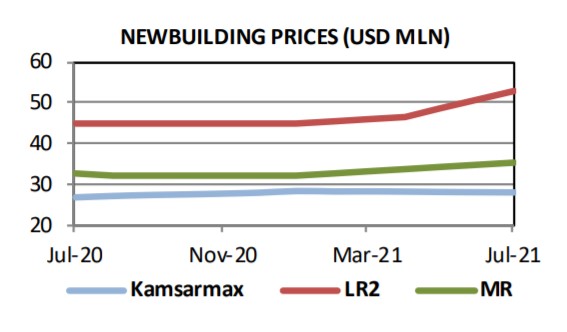 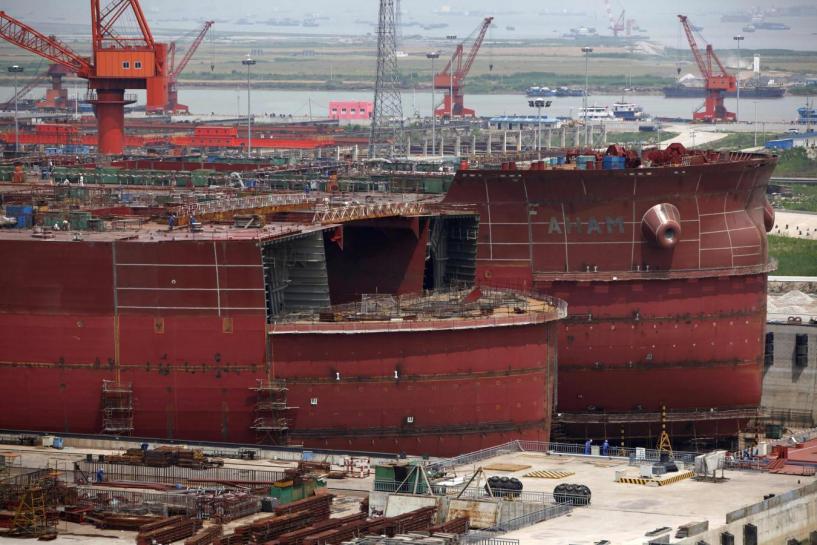 Meanwhile, the S&P market has continued its brisk pace of deals. In its latest weekly report, shipbroker Allied said that “on the dry bulk side, it was yet another week with robust interest and several fresh deals taking place. Attractive freight earnings and healthy sentiment has increased the number of keen buyers in the market. Focus was given this past week on the smaller sizes, but appetite remains robust for the segments as a whole. At the same time, sellers continue pushing for higher premiums for their units, adding upward pressure on asset prices. Despite this, it seems that buyers are still considering these price levels as fair for the moment. On the tanker side, it was a week with moderate activity taking place, with most units that changed hands being oil product tankers. Market sentiment continues to be hurt, curbing buying appetite. Despite the limited fresh interest from the side of buyers, secondhand asset prices are still on a rising trajectory, making it even more difficult for SnP activity to ramp up. We expect this trend to alter, once the market enters a more promising recovery stage”, Allied noted. 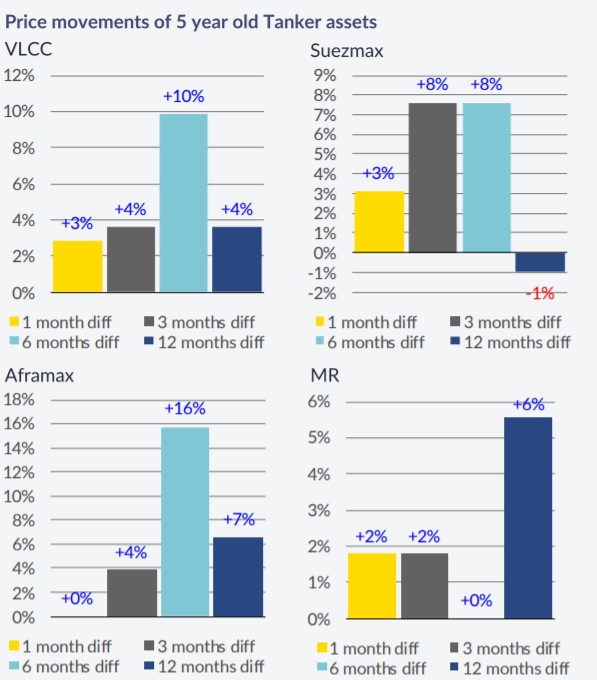 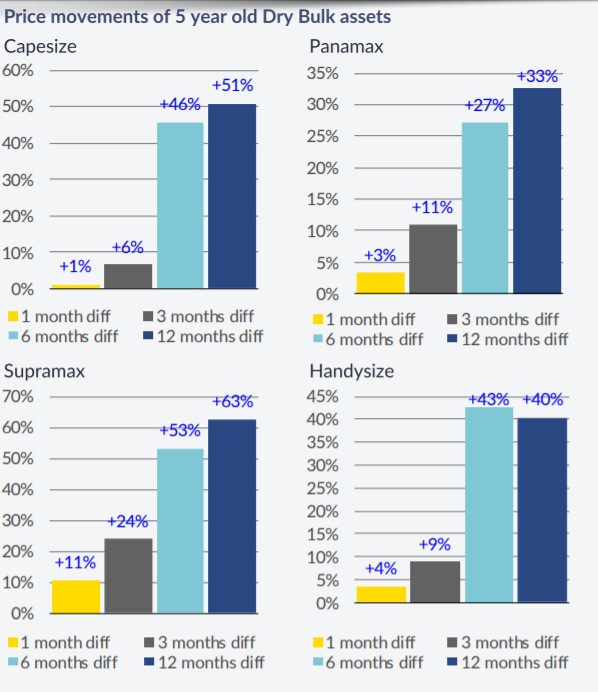 In a separate note, Banchero Costa added this week that in the dry bulk market “Capesize “Bulk Denmark” 181,000 dwt 2010 Koyo, Japan went to clients of Thenamaris for a firm $30.5 mln. Vessel has its next SS/DD in 2025, October and both ballast treatment system and scrubber fitted for delivery August-September. Postpanamax “Lowlands Green” 95,000 dwt 2011 Imabari has achieved $21 mln for delivery January 2022. Vsl has BWTS fitted and good class position too. Two kamsarmax bulkers “Navios Marco Polo” and “Magnolia” abt 82,000 dwt both same age (2011 built) and construction country (Tsuneishi – Universal, Japan) have achieved similar price i.e. $22.5 mln and $22 mln respectively with the difference probably given by forward delivery of the latter. A smaller handy 28K type “King Rice” 2012 blt and BWTS fitted has been now sold for $12.8 mln to Taylor Maritime. Last week we reported a 2013 28K type (Lucky Life) sold $13.8 mln hence the price could be considered as “in line” – lots is depending on delivery period indeed”. 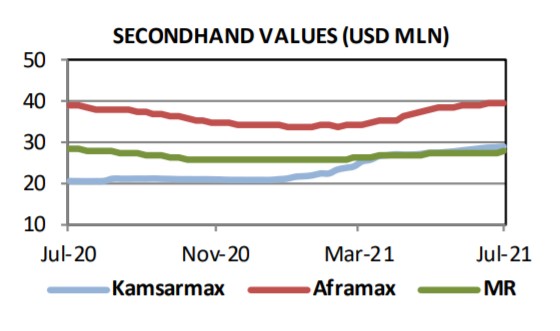 In the wet segment the shipbroker added that “VLCC “Takahashi” 298,000 dwt 2007 NACKS, China has been picked up by Greek buyers for $34.5 mln making a new recent benchmark for such size/age. Aframax “Pericles” 115,000 dwt 2003 Samsung has been sold to allegedly Turkish buyers for $13 mln, fairly in line with the market and recent activity. Finally two sisterships MR1 with 2nd SS/DD freshly passed and BWTS fitted have achieved $15.5 mln each from Leon Shipping and Trading”, Banchero Costa concluded.
Nikos Roussanoglou, Hellenic Shipping News Worldwide

Previous: Containers continue to triumph
Next: Far from taper, ECB could tee up another $1 trillion of QE