NGO Shipbreaking Platform: Most shipping companies continue to opt for the highest price at the worst scrapping yards

According to new data released today by the NGO Shipbreaking Platform, 674 ocean-going commercial ships and offshore units were sold to the scrap yards in 2019. Of these vessels, 469 large tankers, bulkers, floating platforms, cargo- and passenger ships were broken down on only three beaches in Bangladesh, India and Pakistan, amounting to near 90% of the gross tonnage dismantled globally.

“Bangladesh remains the favoured dumping ground for end-of-life ships laden with toxics. There is wide-spread knowledge of the irreparable damage caused by dirty and dangerous practices on tidal mudflats, yet profit is the only decisive factor for most ship owners when selling their vessels for breaking”, says Ingvild Jenssen, Founder and Director of the NGO Shipbreaking Platform. 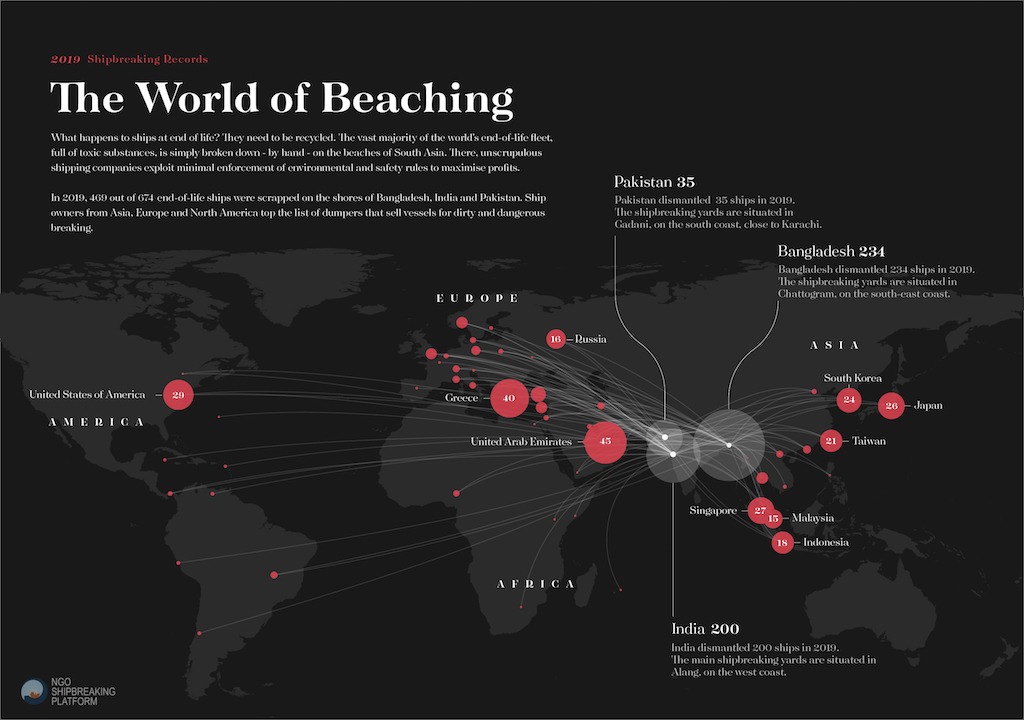 Last year, at least 26 workers lost their lives when breaking apart the global fleet. The Platform documented accidents that killed 24 workers on the beach of Chattogram (formerly known as Chittagong), making 2019 the worst year for Bangladeshi yards in terms of fatalities since 2010. At least another 34 workers were severely injured. Whilst the total death toll in Indian yards is unknown, local sources and media confirmed at least two deaths at shipbreaking yards that claim to be operating safely, but have failed to be included in the EU list of approved ship recycling facilities [1].

UNITED ARAB EMIRATES and GREECE top the list of country dumpers in 2019. UAE owners were responsible for the highest absolute number of ships sold to South Asian shipbreaking yards in 2019: 45 ships in total. Greek owners closely followed with 40 beached vessels.

The ‘worst corporate dumper’ prize goes to the Taiwanese container shipping line Evergreen. In the last years, the company has been under the spotlight for its damaging shipbreaking practices. In January 2018, the Norwegian Central Bank announced its decision to divest from Evergreen due to the ship owner’s repeated sale of vessels for dirty and dangerous breaking on the beach of Chattogram. Since then, the company has clearly not changed its policy. Eleven of Evergreen’s vessels ended up in South Asia in 2019. On 23 July, cutter man Shahidul lost his life while working at Kabir Steel’s Khawja shipbreaking yard in Bangladesh. Shahidul was dismantling Evergreen’s EVER UNION when he fell from a great height. He died on the spot.

Dry bulk shipping company Berge Bulk is runner-up for worst corporate practice. Four ships owned by the Bermuda-based ship owner ended up in Bangladesh for dirty and dangerous breaking. Berge Bulk’s scrapping practices should prompt the Lloyd’s List Asia Awards to withdraw the prize for “Excellence in Environmental Management” the company recently received for its commitment to environmental conservation. Indeed, there is nothing laudable about putting workers lives at serious risk and polluting sensitive coastal environments.

Danish container shipping giant Maersk scrapped four vessels on the Indian beaches last year. The company did not hesitate to leave the Danish shipping registry in order to circumvent the new EU laws requiring the use of EU-approved recycling facilities, and at least two of the ships even left EU waters in breach of an international and European ban on the export of hazardous waste to developing countries. In November, Bangladesh Courts condemned the illegal breaking of Maersk’s FPSO North Sea Producer which had been sold to cash buyer GMS and fraudulently exported from the UK in 2016. Criminal investigations are underway in the UK.

In India, many yards now boast having upgraded their beaching facilities to comply with the requirements set by the International Maritime Organisation’s Hong Kong Convention. Recent inspection visits by the European Commission in Alang and media reports, however, flag serious concerns related to pollution of the intertidal area; absence of medical facilities; breaches of labour rights and lack of capacity to safely manage a number of hazardous waste streams, including mercury and radioactive contaminated materials that are typically found on offshore oil & gas units. No facility located in South Asia meets the safety and environmental requirements for EU approval.

All ships sold to Chattogram, Alang and Gadani pass via the hands of scrap-dealers, better known as cash buyers. These pay the highest price for end-of-life vessels and are inherently linked to the beaching yards. Cash buyers typically re-name, re-register and re-flag the vessels on their last voyage. Black-listed flags, such as Palau, Comoros and St Kitts & Nevis, were particularly popular in 2019: almost half of the ships sold to South Asia changed flag to one of these registries just weeks before hitting the beach. None were beached under an EU flag, despite many vessels having been sold by a European shipping company.

“Policy makers need to adopt effective measures to divert ships towards the sites that have been approved by the EU. The fact that old ships are registered under flags known for the poor implementation of international maritime law sheds serious doubt over the effectiveness of legislation based on flag state jurisdiction only, including the EU Ship Recycling Regulation”, says Jenssen.

Today banks, pension funds and other financial institutions are actively taking a closer look at how they might contribute to a shift towards better ship recycling practices off the beach, taking into account social and environmental criteria, not just financial returns, when selecting asset values or clients. [2] Police and environmental authorities are also increasingly monitoring the movements of end-of-life vessels. Following the Seatrade judgement in the Netherlands where, for the first time, a ship owner was held criminally liable for having intended to sell four end-of-life ships to Indian beaching yards, several other cases of illegal traffic are under investigation. [3] Aiding and abiding environmental crime is equally punishable: insurers, brokers and maritime warranty surveyors could therefore also be held liable. By unravelling the murky practices of shipbreaking, these cases highlight the importance of conducting due diligence when choosing business partners.

“Clean and safe solutions are already available. We applaud companies, such as Dutch Van Oord, that have had a responsible ship recycling policy ‘off the beach’ for many years. Whilst other ship owners lament over the lack of capacity to recycle sustainably, only 31 vessels were recorded recycled in EU-approved facilities, which represent a minor fraction of what these yards are able to handle”, states Nicola Mulinaris, Communication and Policy Officer of the NGO Shipbreaking Platform.

In a statement released on the above matter, Evergreen said the following:

” Evergreen Line once again emphasizes that its ship demolition and recycling policy requires the shipbreaking yard selected by all buyers of its decommissioned vessels must be not only ISO certified (ISO 9000, 14001, 18001 or 30000), but also implement class approved standards of the 2009 Hong Kong Convention (HKC). The Convention comprises the control and regulation of vessel’s entire service life from design, construction, operation to recycling. It aims to enhance safety in the ship recycling industry, maintain environmental protection standards, reinforce regulation of ship design, construction, operation and demolition and, in particular, raise the environmental protection standards of ship recycling facilities. Despite the Convention as yet not being officially in force, Evergreen insists on the adoption of such stringent standards in order to ensure the decommissioned vessels being scrapped in a safe and eco-friendly manner.

It is also noteworthy that Evergreen recently strengthened its contracts by adding a liquidated damage clause into the memorandum of agreement (MOA), which makes it carry heavier weight and deterrent effect for any buyer who is non-compliant. Notwithstanding that, if it is found that recycling of any of the company’s vessels does not fully comply with the stated standards, Evergreen will take all necessary actions to safeguard its values of its green recycling policy.

A case in point is the scrapping of Ever Unison. Evergreen currently planning to launch arbitration proceedings against the buyer for breaching the obligation, under the terms of the MOA, to scrap at a HKC green shipyard. Evergreen is also considering to seek an injunction from the High Court to prevent vessel being demolished at its current location”.

[1] The EU Ship Recycling Regulation became applicable on 1 January 2019. According to the Regulation, EU-flagged vessels have to be recycled in one of the currently 41 approved facilities around the world included in the EU list. EU-approved ship recycling facilities must comply with high standards for environmental protection and workers’ safety. The EU list is the first of its kind; is the only list of facilities that have been independently audited; and provides an important reference point for sustainable ship recycling. Any ship owner that wants to opt for safe and clean ship recycling can simply choose one of the 41 facilities that are now included on the List.

[2] In early 2018, Scandinavian pension funds KLP and GPFG were the first to divest from four shipping companies, including containership company Evergreen, due to their beaching practices.

[3] In Scotland, Diamond Offshore and cash buyer GMS are still under investigation for having attempted to illegally export three heavily contaminated platforms that had operated in the North Sea and were cold-stacked in Cromarty Firth. The rigs have been detained in Scotland since January 2018.
Source: NGO Shipbreaking Platform, Evergreen Line