Pain from the sell-off at the end of last year is still fresh in the minds of European stock traders, making them especially nervous about the latest string of bad omens.

As the anniversary of 2018’s market carnage approaches, investors wonder whether they should fear an encore of the panic that wiped out as much as $2.1 trillion from the European benchmark, fueled by higher rates and growth concerns. At first glance, things couldn’t be more different: the European Central Bank has just boosted stimulus measures and investors aren’t expecting a U.S. recession until at least next year.

But this week’s release of disappointing economic data in France and Germany came as a sharp and unpleasant wake-up call for the fans of equities that have returned a whopping 19% this year. The seriousness of the slowdown makes investors doubt the potency of the ECB measures without the support of individual nations’ fiscal stimulus. An escalation in the U.K. political crisis and the start of an impeachment inquiry of President Donald Trump aren’t helping sentiment either. 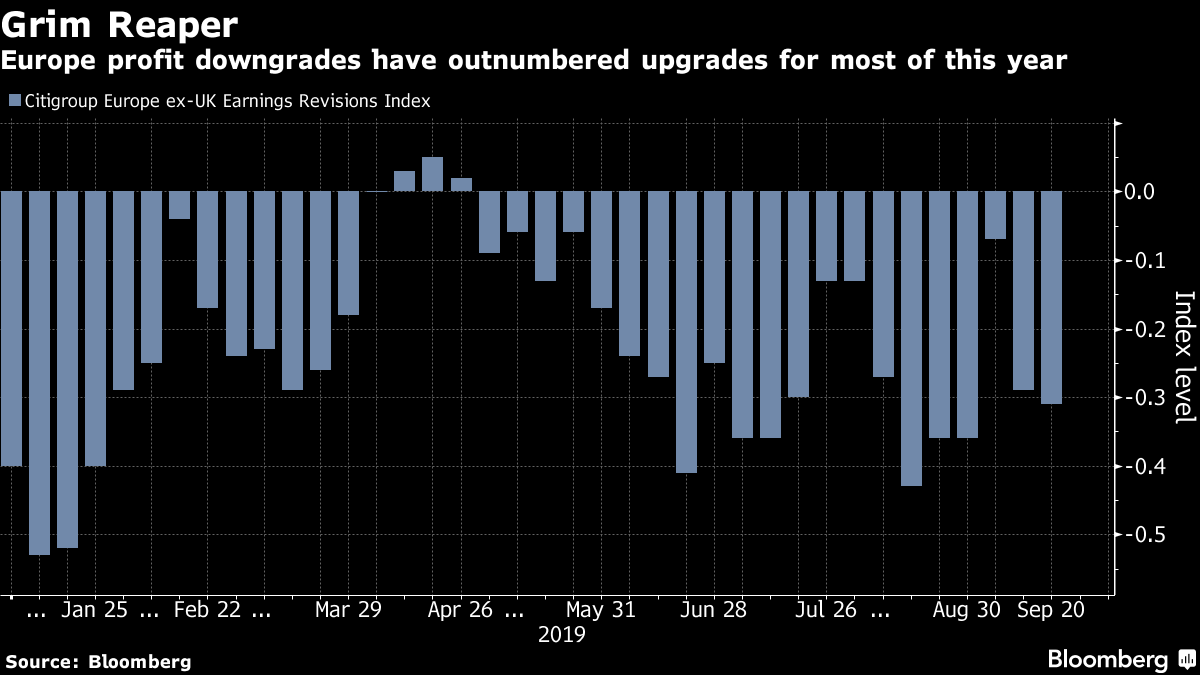 “Our concerns have increased while euro-zone stocks have outperformed — not an attractive mix,” said Lars Kreckel, global equity strategist at Legal & General Investment Management, which is underweight euro-zone equities versus the U.S. “Recession risk remains uncomfortably high for the euro zone.”

The impact from continuing trade tensions and a global slowdown are taking their toll on Europe. Business expectations in Germany fell to the lowest in a decade this month and the slump in manufacturing pushed the region’s largest economy closer to recession.

Fund managers are echoing the concerns of the departing ECB President Mario Draghi that governments need to join the central bank’s measures in supporting the economy. According to the latest Bank of America Merrill Lynch survey, an expansion in German public spending outranks even a rate cut by the U.S. Federal Reserve in its importance to fueling gains in risk assets. 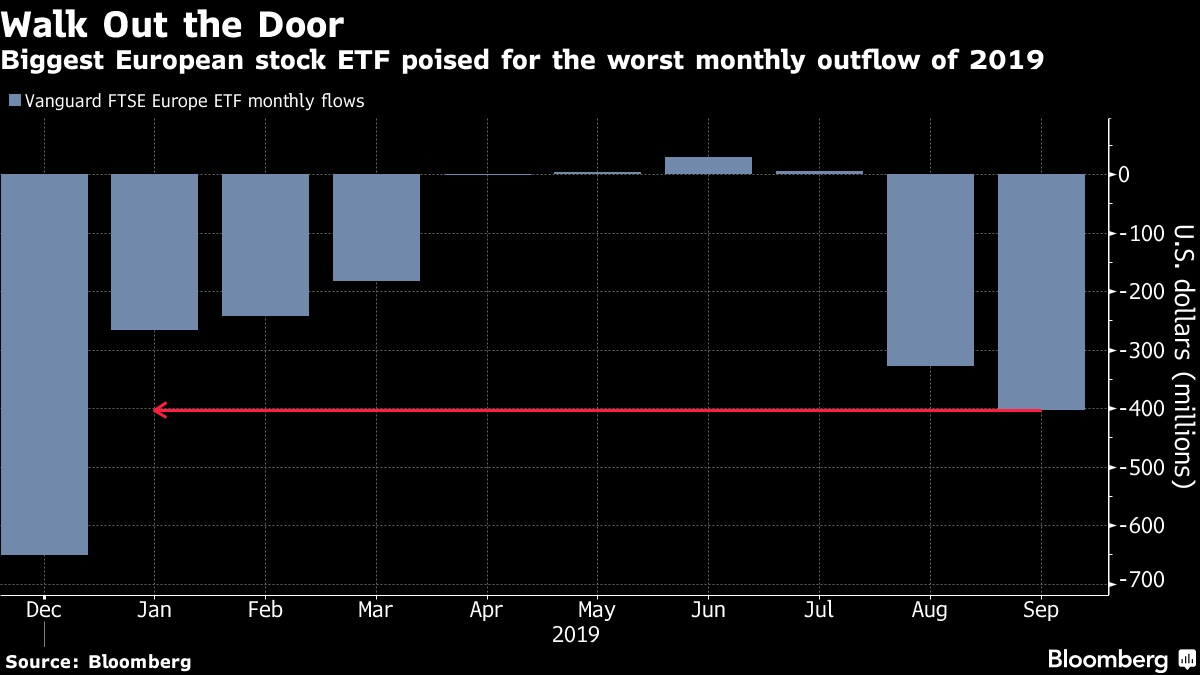 So far, there’s little sign of imminent action, with Chancellor Angela Merkel saying that the problem isn’t a shortage of money for investment. This could break the winning streak for the Stoxx Europe 600, says Edward Park of Brooks Macdonald Asset Management.

“One of the greatest risks to European equities is that the weak manufacturing data is not enough to encourage a fiscal response from Germany,” said Park, deputy chief investment officer at Brooks Macdonald, which is underweight European stocks. “If this is the case and markets fear a further downturn in business activity, the fourth quarter could be challenging for European risk assets.”

Ironically enough, the market’s already pessimistic stance on European stocks could serve as a cushion to possible end-of-the-year downside. Funds focused on the region’s equities have lost $97 billion in outflows this year alone and, based on the Bank of America survey, are the least popular assets globally. Plus, strategist cuts to European earnings growth expectations have exceeded upgrades almost every month of this year.

“We don’t expect a repeat of a spectacular drawdown because earnings expectations have come down substantially over the last 12 months, i.e. quite a bit of bad news is discounted,” said Themis Themistocleous, head of the European Investment Office at UBS Wealth Management, which is underweight euro-zone equities. “Nevertheless, we expect European stocks to struggle in the fourth quarter amid ongoing earnings downgrades and slowing economic growth.” 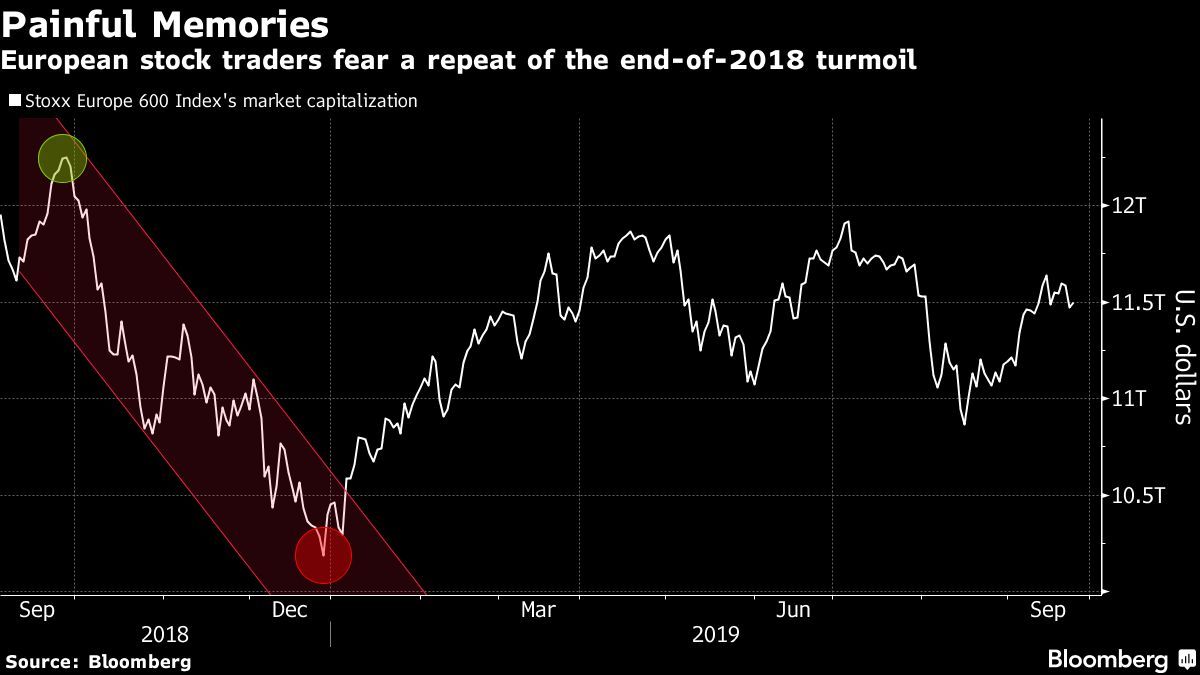 The Stoxx Europe 600 Index fell 12% in the final quarter of 2018, the worst decline since 2011, and spent most of this year making up for this dramatic loss. It is now enjoying the best gain for the first nine months of the year since 2009. Valuations in 2019 have rebounded from December lows, but remain below historical averages.

As they approach the fourth quarter, fund managers are confronted by the dilemma of risking losing this year’s stellar returns or missing out on further gains if they sell too early. Even such devoted fans of equities as Ken Adams of Aberdeen Standard Investments say the outlook is particularly uncertain at the moment.

“Our overall stance is positive, but only modestly so,” said Adams, the global head of multi-asset strategy at Aberdeen. “My advice over the next three months is to maintain some dry powder in case something unexpected happens. That’s certainly worthwhile in this environment because the crystal ball is especially clouded at the moment.”
Source: Bloomberg