Those hoping for a decent recovery in trade in the second half of the year should prepare for disappointment.

New data from the United Nations Conference on Trade and Development (UNCTAD) predicts a 20% slump in the value of trade this year – and developing countries look set to bear the brunt of the pain.

Pamela Coke-Hamilton, UNCTAD’s director of international trade, says the jury is still out on a turnaround in 2020: “There is still a lot of uncertainty about the possibility of any economic recovery in the second half of the year.

Unsurprisingly, lockdown measures and the subsequent collapse in national economies are to blame.

UNCTAD data for merchandise trade reveals a 5% fall in the first quarter of the year and forecasts a 27% drop for the second quarter, leading to the expectation of a 20% annual decline for 2020.

“International trade is likely to remain below the levels observed in 2019,” Ms Coke-Hamilton says, “but how far depends on the pandemic’s evolution and the type and extent of the policies governments adopt as the try to restart their economies.”

Many developing countries were behind the curve when it came to actual Covid-19 infections, but in trade terms the pandemic hit as soon as developed countries closed their borders and enacted lockdown measures. For example, South-South trade dropped 2% in the first quarter of the year, but then tumbled 14% in April.

“For developing countries, while declines in exports are likely driven by reduced demand in destination markets, declines in imports may indicate not only reduced demand but also exchange rate movements, concerns regarding debt and a shortage of foreign currency,” the report says. 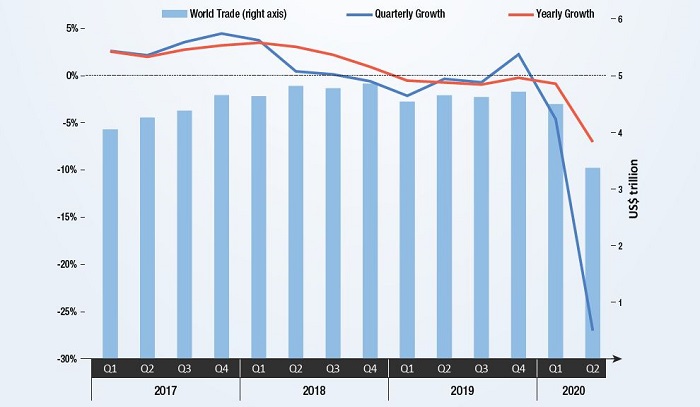 The statistics for developed countries are similarly unpalatable. In April, developed countries’ imports were down 10%, while exports dropped 14%. “No region has been spared from the decline in international trade,” said the report. While China appears to have fared better than other major economies – exports grew by 3% in April – UNCTAD cautions that this ‘recovery’ may be short-lived as imports and exports fell by about 8% in May.

“Preliminary data for April suggests the sharpest downturn for South Asia and the Middle East, which could register trade declines of up to 40%. Meanwhile, the East Asia and the Pacific regions appear to have fared best, with trade drops remaining in the single digits both in the first quarter of 2020 as well as in April.”

In an examination of sectors, automotive trade has been hit the hardest with trade down 49% in April. Energy ranks second with a fall of 39% in trade. Chemicals trade was down 14%, while metals and ores trade dropped 7% in April.

Trade in office machinery stayed in the black with 8% growth in April, due to work from home policies around the world and a surge in demand for home office equipment.

The flow of imports and exports of medical products, the report says, has followed the spread of the virus. The first two months of 2020 saw an increase in Chinese domestic demand, resulting in a jump in medical product imports primarily from Europe and the US, which had not yet been significantly hit by the pandemic. Meanwhile, Chinese exports of the same dropped by 15% as national production shifted towards fulfilling domestic needs.

In terms of production changes, UNCTAD believes that international production is set for “significant transformation” in the decade ahead, as the Covid-19 pandemic amplifies existing challenges.

In its World Investment Report 2020, the UN agency says that the global financial crisis of 2008 led to a decline in cross-border investment in physical production assets. This combined with growing economic nationalism, the new industrial revolution and the increasing focus on sustainability had already put strain on production-related investment. The pandemic looks set to tip the scales further.

While supply chain resilience is crucial for economic growth and job creation, recovery will depend on policymakers safeguarding a trade and investment policy environment that favours a gradual adjustment of international production networks.

UNCTAD’s director of investment and enterprise, James Zhan added that looking forward there will need to be a refocus of development strategies towards attracting investment in building productive infrastructure and fostering services. In a solitary bright note, Mr Zhan singled out investment in the blue economy as an important factor in the transformation of production in the post-Covid-19 era – small comfort for beleaguered shipping companies.