Non-OPEC oil supply continued to increase by 2.0 mb/d in 2019, driven by US shale production, which rose by 1.7 mb/d, amounting to 84% of total non-OPEC supply growth. This growth came despite pipeline constraints in the Permian basin in 1H19, and as independent oil companies began to reduce spending in response to investor demands to raise free cash flow. With regard to infrastructure, Canada also suffered from limited pipeline and storage capacity, which led to a mandate to curtail oil sands production by the Alberta provincial government. Liquids production in Brazil, Australia, Russia and China also contributed to the gains, while part of this growth was offset by heavy declines in Mexico and Norway.

Capital expenditure, including exploration capex in non-OPEC countries, reached a record high of US$741 bn in 2014 when oil price levels were also high. However, in the years that followed and with lower average oil prices, investment dropped to considerably lower levels in 2016. Moreover, since the beginning of the renewed decline in oil prices in 4Q18, the amount of capex has also decreased to US$459 bn in 2019. Capex in 2020 is forecast to show a y-o-y decline of 23%, according to preliminary estimations, which is only approximately half of level of capex in 2014. The COVID-19 pandemic, which began in 1Q20 has spread globally in a matter of a couple of months, has caused a recession in the global economy as well as an unprecedented oil demand shock, leading to large oversupply in the oil market. 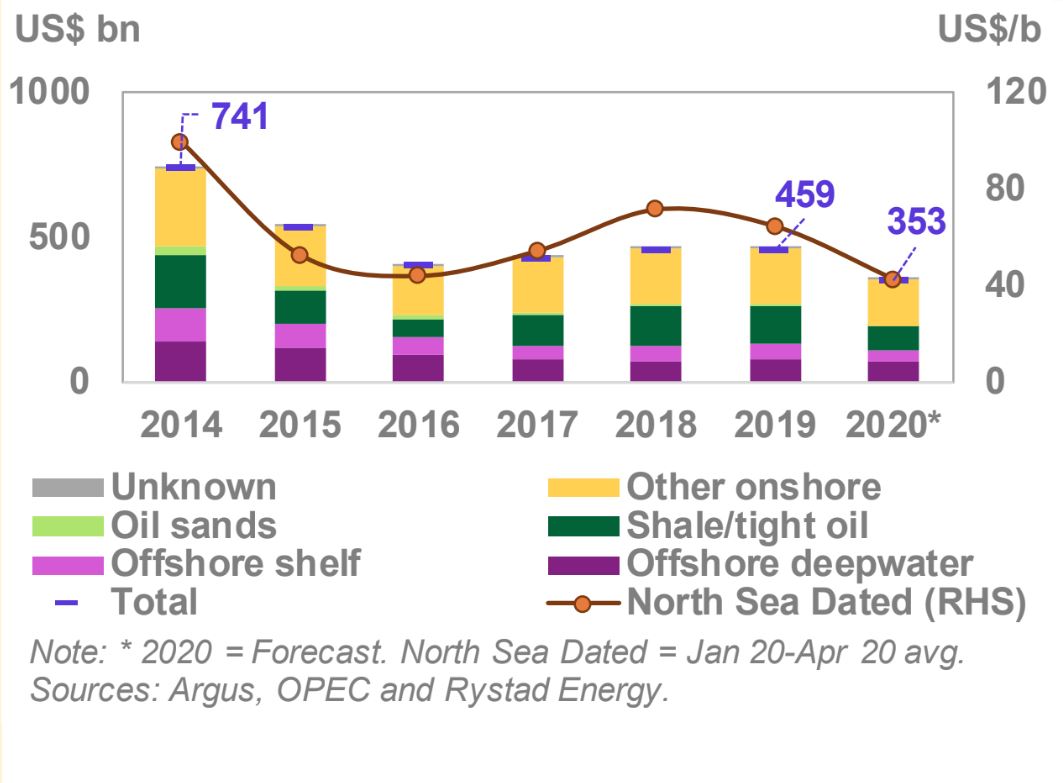 In response to this sudden and huge market imbalance, OPEC and the 10 non-OPEC participants in the Declaration of Cooperation (DoC), decided to adjust down their combined current production by 9.7 mb/d in May and June 2020, to be followed by a combined reduction of 7.7 mb/d in 2H20 and by 5.8 mb/d for a period of 16 months, from 1 January 2021 to 30 April 2022. Furthermore, on 12 May 2020, Saudi Arabia, the UAE and Kuwait announced that they would voluntarily deepen oil output adjustments from June, by 1 mb/d, 100 tb/d and 80 tb/d, respectively, in an effort to expedite draining a global supply glut and rebalancing the oil market. Outside of the DoC, other non-OPEC producers, particularly US producers, reduced their production by shutting-in producing wells or adjusting down the rate of production. According to different sources and company announcements, US producers – including oil majors – have so far cut production by at least 1.5 mb/d in 2Q20, which is likely to be achieved by shut-ins of higher-cost wells, partial reductions in output of selected wells and the deferral of “putting on production” wells.

Additionally, 2020 oil production in Canada, particularly Alberta’s bitumen and synthetic crude, is forecast to decline by 0.4 mb/d on an annual basis, on reduced upstream capex of the main operators and shut-ins/curtailment announcements of around 1.0 mb/d.

Globally, outside of the DoC, as of 6 May 2020, around 3.6 mb/d of production cuts have so far been announced in response to the lack of demand, low oil prices, excess supply and limited storage capacity. With this, non-OPEC supply in 2020 is expected to see a deep contraction of 3.5 mb/d mainly in the US, Russia and Canada, as only few countries will to show some supply growth in 2020 such as Norway, Brazil, Guyana and Australia. 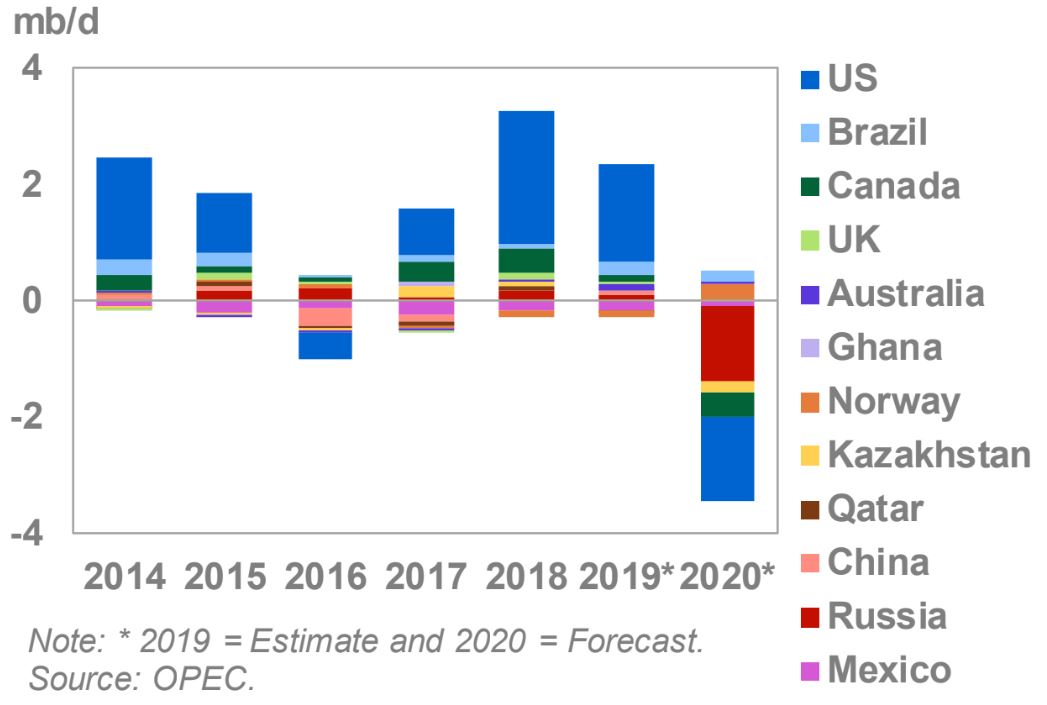 The speedy supply adjustments in addressing the current acute imbalance in the global oil market has already started showing positive response, with rebalancing expected to pick up faster in the coming quarters.
Source: OPEC