There are numerous barometers out there that offer a window to the global economy. The oil price is one. Gold is another. Those of an FX bent might prefer EUR/USD, USD/JPY or even GBP/USD, although the UK’s Brexit travails may have marked that particular pair as a rather unreliable narrator of potential shockwaves ahead.

And then there’s the not quite so sexy. Bond yields probably fall into that category. So too does shipping. You rarely see the latter hog the headlines, but with something like 90% of global trade borne aboard the world’s fleets, it matters. And the fate of the Baltic Dry Index in recent months doesn’t paint a pretty picture at all. As a bellwether for the global economy, there are not many as reliable.

On July 24, the BDI stood at a year high of 1,774. On November 20, it had plunged to 1,003. Despite a bounce back in the last week or so to the 1,300 zone, it will certainly give participants at Nordea’s Shipping, Offshore and Energy Seminar in London on December 5 much to mull over. The 2018 low of 948 came on April 6 at a time when the US and North Korea were at loggerheads and it is perhaps no coincidence that US president Donald Trump played a central role in that drama and has also taken firm hold of the pedestal in the current trade war with China.

AP Møller-Mærsk chief Søren Skou has already warned that there would be a “price to be paid” on the back of the trade war. Skou, speaking at the release of the container shipping company giant’s third-quarter results earlier this month, said Mærsk would take a hit some time in the first quarter of 2019, reports The Financial Times.

The war has so far seen the US place levies on about $250 billion worth of goods with China retaliating to the tune of $110bn. Another $267bn is in the pipeline too from Washington’s war chest possibly to be unleashed if talks this weekend between Trump and Chinese premier Xi Jinping at the G20 jamboree in Buenos Aires go badly.

Peaks and troughs: Sharp moves in the BDI in 2018 reflect the pervading global uncertainty 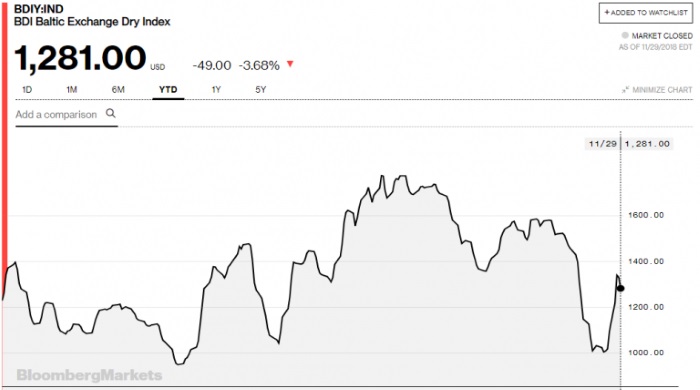 But is it just a trade war issue? Or is there more to the slide in the BDI? Nordea’s chief analyst for Asia, Amy Zhuang, certainly sees it as more nuanced.

“The trade war reduces demand for shipping activity, so it explains at least partly the collapse of the BDI,” says Singapore-based Zhuang. “However, the general slowdown in global manufacturing is also highly correlated to the BDI, so the fall could indicate that the upturn in the global economy has come to an end this year.”

Zhuang also points to the sharp decrease in oil since early October as further evidence of the factors underpinning the BDI’s slump. “Since dry bulks don’t transport oil, the explanation is simply that the trade war and concerns about the global economy have made both oil and the BDI fall.”

Two to tango: Both oil and the BDI have turned sharply south in the last seven weeks. Source: Macro bond 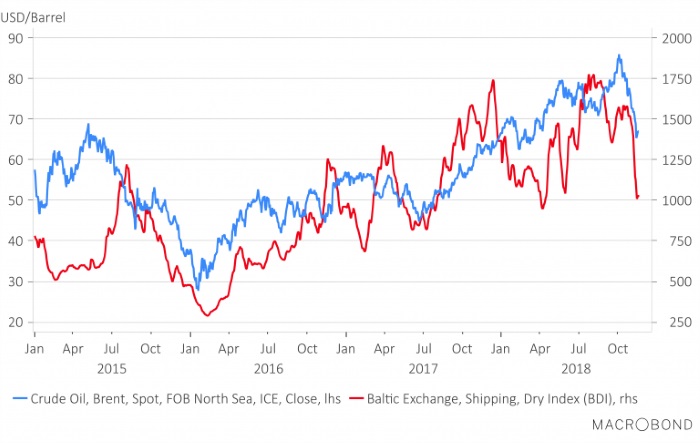 Should we care about the BDI? Undoubtedly. The index is a measure of what it costs to ship raw materials so as a barometer of global demand, it’s hard to beat. While ship construction is constantly on the go, it can’t respond to demand flows in the same way refineries might be able to release oil storage for example, so when prices shift, it’s a pretty accurate depiction of the supply and demand equation in its purest form.

The greater the cost of shipping then, the more global demand for key commodities there is. A fall in shipping costs inevitably indicates a weakening in global demand. So an approximate 35% slide since the July peak to November 20 (since when there’s been a partial bounce back) suggests nothing but bad news for the world’s economy.

“Purely statistically, oil and stock prices have not been a good bellwether for the global economy since 2010,” says Zhuang. “The BDI and EUR/USD have been better and the explanation is simple. The former two have seen large speculative inflows as a result of very low interest rates. Shipping too has seen the same surge in investment due to easy money, so it actually came as a surprise that it has had a fairly high correlation with global business cycle.”

Of course, the very fact that the BDI’s recent slide has run almost parallel to the US-China trade war suggests that the minute Washington and Beijing come to there senses, then an improvement can be expected but, says Zhuang, we shouldn’t anticipate anything dramatic.

“An end of the US-China trade war would at best give a partial recovery to the BDI,” she says. “The slowdown in global manufacturing that is expected to happen even without the trade war, will prevent the BDI from a sharp recovery. The shipping industry’s continued overcapacity will also likely keep the BDI under 2,000.”

Still, context is a wonderful thing. The BDI was as low as 291 on February 12, 2016 when oil scraped along at around $30/b and had since that nadir been on a gentle rise north until the rude interruption of the last three months or so. While the heady days of December 2013 are still some way off when the BDI was higher than 2,300, it does add perspective to the recent fall and crumbs of comfort for those of an optimistic bent.

“In the longer term, more infrastructure investment in Asia, particularly India, could boost commodity imports and therefore push the BDI much higher, but that’s at least a few years into the future,” says Zhuang.
Source: Nordea Markets (Martin O’rourke) https://nordeamarkets.com/global-economy-looks-to-shipping-as-trade-war-reverberates/

Previous: Dry Bulk Market: Capesizes Had a Roller-coaster Week
Next: The Dry Bulk Market Moving Forward: 2019 To be A Mixed Bag If China’s Economy Doesn’t Pick Up Steam