“NORDEN generated a positive result in a quarter characterised by a strong winter market in tankers and a dry cargo market on the brink of collapse. NORDEN had anticipated a weak dry cargo market, but not even swift and agile response in Dry Operator could offset rates being halved within a three-week period. Dry Owner, however, was well protected against the weak market due to high coverage and generated a break-even result, while the Tanker business was well positioned towards a very strong winter market and delivered a good result.”

Results
In a healthy winter product tanker market and a weak dry cargo market, NORDEN realised an Adjusted Result for the first quarter of 2019 of USD 7 million (Q1 2018: USD 9 million). The result is impacted negatively by the implementation of the new IFRS 16 regulation. Excluding this effect, the Adjusted Result was 10 million.

Overhead and administration costs increased by USD 5 million, mainly due to the full consolidation of the Norient Product Pool management company, which was acquired by year-end 2018. The cost increase is offset by a similar increase in management fees recorded under Other operating income.

Net financial items mainly declined as a result of interest expenses on lease liabilities due to IFRS 16.

Cash flow from operating activities amounted to USD 63 million in the quarter due to a reduction in working capital and reclassification of certain lease payments due to IFRS 16.

Sale of vessels
In line with the NORDEN strategy of becoming an increasingly asset light business, NORDEN sold 5 vessels consisting of 4 dry cargo and 1 product tanker vessel at a total price of USD 50 million. The full-year effect of the sales is expected to be a loss of USD 9 million, of which a loss of USD 12 million is recorded in Q1 2019, and an expected gain of USD 3 million will be recorded in Q2 2019 when the vessels are delivered to the new owner. After the quarter, NORDEN sold an additional dry cargo vessel with delivery during Q2 2019. 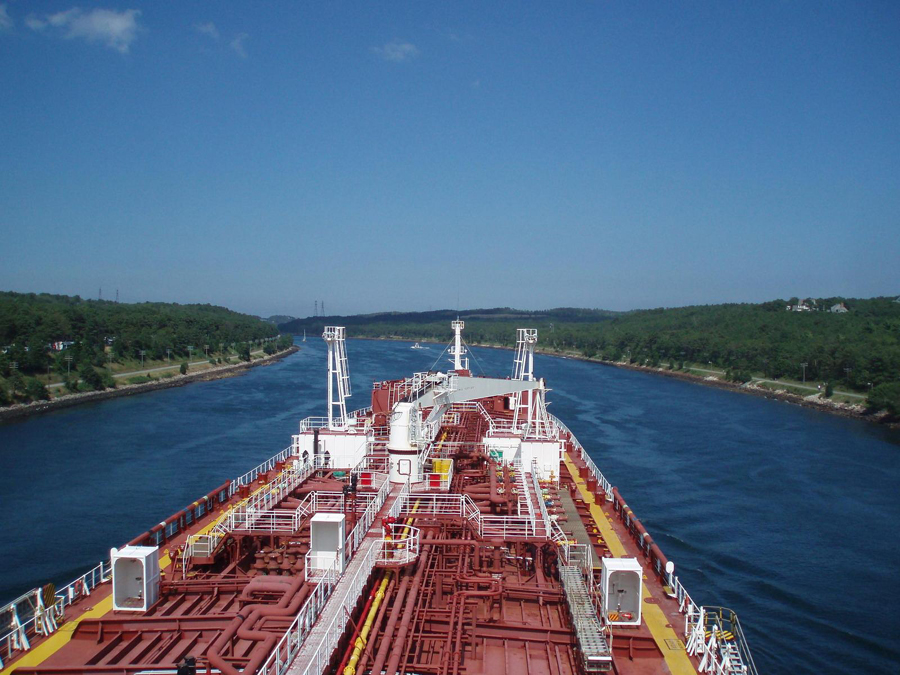 Financial position
At the end of the quarter, NORDEN’s available liquidity amounted to USD 263 million with USD 187 million in cash and securities supplemented by USD 76 million in undrawn credit facilities.

NORDEN’s net commitments, calculated as total bank debt, T/C commitments and outstanding payments on newbuildings less cash and future earnings from coverage, were reduced by USD 190 million during the quarter to USD 486 million. The decrease is the result of vessel sales, increased coverage and cash from operations. NORDEN estimates that acquisition and installation of the Ballast Water Treatment Systems and the scrubber programmes will incur CAPEX of USD 79 million during 2019 and 2020.

New lease accounting IFRS 16 Leases NORDEN has applied IFRS 16 as of 1 January 2019 retrospectively without restating comparative figures. The new accounting policies are set out in note 1 “Basis of
preparation and changes to NORDEN’s accounting policies”, and for a detailed overview of the effect on IFRS 16 on both the current result and balance sheet, see note 17 “Transition to IFRS 16 Leases”.

The effect of the new accounting standard at the end of Q1 2019 has been an increase of USD 309 million in total assets of which USD 275 million consists of right-of-use assets. The new regulation has had no impact on equity, but the equity ratio has declined to 49% as of 31 March 2019 compared to 57% at year-end 2018 due to the recognition of lease liabilities.

Impairment assessment
NORDEN has carried out a routine assessment of indicators of impairment. Management has concluded that no impairment test had to be performed for the cash generating units Dry Cargo and Tankers. It is Management’s assessment that at the end of the first quarter of 2019 there is no need for impairment of vessels, right-of-use assets and newbuilding’s or reversal of previous impairment.

As required by the implementation rules in IFRS 16, the previously recognised provision for onerous contracts has been offset against the right-of-use assets recognised in the balance sheet.

Activity in the first quarter
In the first quarter, a total of 25,088 vessels days, the equivalent of an average size of 279 vessels, were operated by Dry Operator. This is an increase of 3% compared to the same quarter last year and in line with the growth strategy.

Trade tensions and the Vale dam disaster resulted in a market crash, which almost halved the average Panamax earnings over a three-week period. Despite an anticipated weak market in the first quarter of 2019, the pace of the decline in rates and collapse in market activity resulted in a negative Adjusted Result for the first quarter.

Well positioned for the second quarter Dry Operator continues to grow its operated fleet and take advantage of market volatility. Further resources are added to Research and Risk management to support the frontline decisions.

As part of NORDEN’s gradual expansion of Dry Operator activities, NORDEN has opened an office in Abidjan, Ivory Coast. West Africa is a rapidly developing region with growing opportunities within dry cargo. The office will generate new business and increase the operational performance in the region.

High coverage in a depressed market

Results for the first quarter of 2019 Entering the year with all vessel days in the first quarter covered, Dry Owner was protected against the challenging rate environment that marked the beginning of 2019 and realised an Adjusted Result of USD 0 million (Q1 2018: USD 5 million).

The result corresponds to an EBIT of USD 1 million (Q1 2018: USD 14 million), including USD -5 million related to the sale of 4 vessels during the quarter.

Dry cargo market
Supramax and Panamax rates started 2019 with a steep decline as continued trade tensions and weaker Chinese demand resulted in an oversupply of available tonnage. Despite improvements towards the end of the quarter, average Baltic earnings for Panamax and Supramax vessels were 39 % and 26 %, respectively, lower compared to the same period last year.

Going forward, reduced Brazilian iron ore output – as a result of the tragic Vale dam collapse end-January – in combination with expectations of slowing Chinese growth is weighing down on demand for dry cargo vessels. Although Capesize vessels have borne the brunt of the declining iron ore production, medium sized vessels, which NORDEN operates, were also affected. NORDEN expects both Panamax and Supramax rates to improve from current levels but remain at levels lower than in the second half of 2018.

Dry Owner fleet and activity
With asset prices remaining at attractive levels although with limited upside, Dry Owner sold 2 Panamax, 1 Supramax and 1 Handysize vessels during the quarter with delivery to their new owners in the second quarter. The sales are in line with the NORDEN strategy of becoming increasingly asset light in the Dry Owner business unit with the goal of achieving a tradable position in the form of 0-15 vessels depending on the point in dry cargo market cycles. After the delivery of the 4 sold vessels, NORDEN will own a total of 14.5 dry cargo vessels.

Covered against market uncertainty Throughout 2018, Dry Owner utilised the market cycle spikes to secure both long- term and short-term coverage. For the second quarter of 2019, 91% of the Dry Owner vessel days are covered at an average daily rate of USD 12,500, and a continued depressed dry cargo market will therefore only have limited impact on second quarter earnings.

Value of Dry Owner vessels
Based on the average of 3 independent broker valuations, the market value of NORDEN’s owned dry cargo vessels and
newbuilding orders was estimated at USD 390 million at the end of the first quarter. This is a decrease of 7% compared to the end of 2018 for the vessels owned throughout the year.

Rates held up throughout winter

• Adjusted Result for the period: USD 10 million
• Market set to strengthen towards the end of 2019
• Significant exposure to expected market improvements

The Company’s Handysize tankers generated daily earnings of an average of USD 17,131, while daily earnings in the MR fleet amounted to USD 15,994. Compared to the average 1-year T/C rate during the last 12 months, the NORDEN result was 6% higher, corresponding to USD 715 per vessel day.

Other operating income and Overhead and administration costs both increased by USD 3 million compared to the same quarter last year due to the acquisition of the 2 management companies in Norient Product Pool, which brought NORDEN ownership to 100%.

During the winter, a combination of lower dirty to clean switching in a strong crude tanker market, reduced stock draws and regional congestions limiting vessel supply created a strong product tanker market. Rates have since fallen to significantly lower levels as the increase in oil price from reductions in OPEC production and the subsequent cancellation of Iran waivers are expected to increase stock draws in the near term. This will impact the crude tanker market, leading more vessels to switch over to CPP trading, and MR rates are expected to remain at current low levels until after summer.

Tanker fleet and activity
At the end of the first quarter 2019, NORDEN owned a total of 24 tanker vessels – 15 MR and 9 Handysize tanker vessels.

The good winter market and increased expectations of a strong second half of 2019 have raised time-charter rates, significantly increasing the value of NORDEN’s extensive time chartered-in fleet consisting of both short- and long-term time charters. In the first quarter of 2019, NORDEN has continued expanding the capacity, through short-term charters between 1 and 2 years adding total capacity of 2,412 days.

Vessel values
Based on the average of 3 independent broker valuations, the market value of NORDEN’s owned Tanker vessels was
estimated at USD 462 million at the end of the first quarter. This is an increase of 1% compared to the end of 2018 for the vessels owned throughout the period.

Tankers
NORDEN’s performance in a strong winter market has created a stronger Q1 result than expected, and on this basis, the full-year expectations for Tankers are adjusted to USD 15 to 30 million (previously USD 5 to 20 million).

Dry Operator
The expectations for the full-year result for the Dry Operator have been lowered to a range of USD 15 to 25 million (previously USD 20 to 30 million) due to the event driven dramatic rate developments in Q1.

Dry Owner
The expectations for the full-year result for Dry Owner have been lowered to a range of USD -5 to 5 million (previously USD 0 to 10 million) as a result of the lost operational income on vessels sold in 2019.

Risk and uncertainties
The Dry Operator results are sensitive to both market conditions as well as NORDEN’s ability to identify and execute business opportunities. At the end of March, Dry Owner had limited exposure to spot rates in 2019, and a change of USD 1,000 per day would only impact the full- year result by USD 2 million. Earnings expectations in Tankers primarily depend on the development in the spot market. Based on about 11,000 open vessel days in Tankers in 2019, a change of USD 1,000 per day in expected T/C equivalents would mean a change in earnings of approximately USD 11 million.

All business units are furthermore sensitive to counterparty risks as well as operational risks.

Events after the reporting date
No events have occurred after 31 March 2019, which significantly affect the interim report for the period 1 January – 31 March 2019, other than the developments disclosed in the Management Review.