Weathernews Inc. Global Ice Center announced its forecast for Arctic Sea ice trends in 2020. Currently, the sea ice in the Arctic Sea is melting at an average pace, but with record breaking high temperatures such as the 38 degrees Celsius recorded on June 20th in the northern Siberian town of Verkhoyansk, the sea ice along the Northeast Passage (Russian side) is expected to melt rapidly going forward. This summer, the Northern Sea Route is projected to be open from mid-August along the Northeast Passage, and from mid-September along the Northwest Passage (Canadian side).

The melting of sea ice has been progressing rapidly in recent years due to the effects of global warming, and its total area has declined by up to approximately 3 million square kilometers compared to the same period 20 years ago (Figure 1). Because of global warming and the benefit of cost savings from the shorter travel distances, the Northern Sea Route has become a regular shipping route in recent years, as well as a major route for LNG carriers transporting liquefied natural gas produced in the Arctic Ocean. Since 2011, Weathernews has responded to the need for support of safe navigation for vessels in the Arctic Sea by providing Polar Routeing Service. The company will continue to support safe ship navigation this summer, combining the results of observations from the proprietary “WNISAT-1R” micro-satellite with existing satellite images to achieve a more accurate understanding of ice distribution in the Arctic Ocean, where measurement data is sparse. 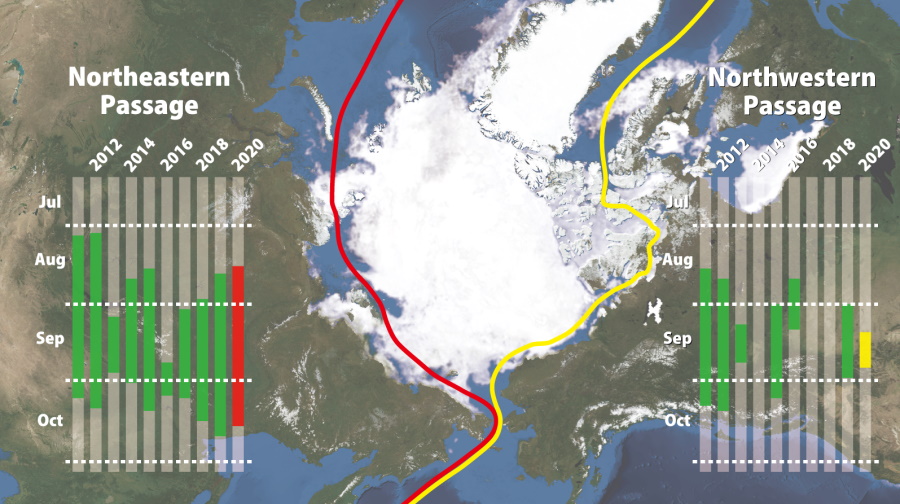 Fig 2 :Distribution of sea ice in the Arctic Ocean (as of June 27th, 2020) and past open periods of shipping passages (green) and predicted open periods for 2020 (red/yellow)

Arctic Sea Ice Trends 2020
In an average year, sea ice in the Arctic Ocean reaches its peak surface area in February or March, and its smallest area in September. This year’s annual peak sea ice area was recorded in March, reaching a maximum of 14.4 million square meters, the largest since 2015. Sea ice is currently in a declining phase due to melting, and as of June 27th, covers 9.24 million square kilometers(Figure 2).
Fig 2 :Distribution of sea ice in the Arctic Ocean (as of June 27th, 2020) and past open periods of shipping passages (green) and predicted open periods for 2020 (red/yellow)

Melting is expected to continue through the summer, with this year’s sea ice area decreasing to a minimum of about 4.23 million square kilometers in mid-September (Figure 3). This is expected to be the 5th smallest area since measurements began in 1979 (Table 1).

Looking at the different sea areas, the melting of sea ice is advancing along the coasts of both the Northeast and Northwest passages. Images from the company’s proprietary WNISAT-1R satellite show that in the Chukchi Sea, which is connected to the Bering Sea, the ocean surface became visible starting in May (Figure 4). The images also confirm faster than usual melting in the Kara Sea located along the Northeast Passage (Figure 5). This may be related to the remarkably high temperatures in adjacent Siberia.

Regarding the opening of the Northern Sea Route, the Northeast Passage is expected to open in mid-August, slightly earlier than last year’s August 20th opening, due to the influence of high temperatures in the Siberian coastal area, and to remain open until mid-October. The Northwest Passage is expected to open in mid-September following the melting of sea ice around the Canadian Archipelago (Figure 2).

* Definition of “open”: A state in which the entire route can be traversed without entering any areas affected by sea ice, according to satellite data.
Source: Weathernews Inc.