The Breakwave Dry Bulk Shipping ETF (BDRY) increased by a small amount this week and closed very close to its all-time intraday high of $31.00. Sentiment and FFA values have improved as spot freight rates have found even more strength. Capesize rates have again experienced a particularly large rise, and we continue to stress that near-term iron ore export prospects remain encouraging. Near-term coal export prospects remain extremely encouraging as well, and it is possible that the world could see a global energy crisis this winter. 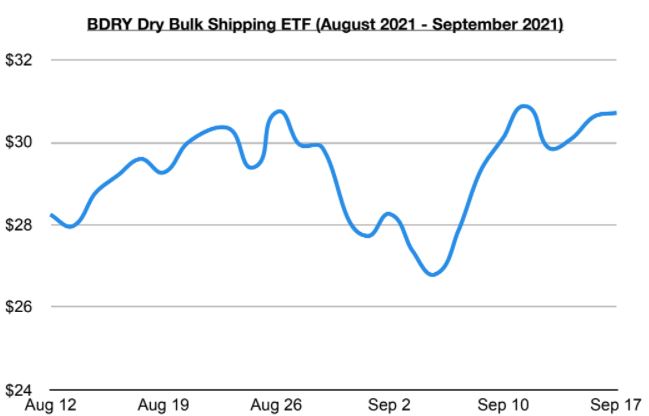 Our upcoming Weekly Dry Bulk Report will discuss various other developments including the number of reported Brazilian spot iron ore cargoes last week setting a 2021 record. While iron ore prices have continued to fall, miners are still making good profits and continue to ship out their iron ore. At the same time, China’s steel production has continued to decline, but China’s iron ore import demand has not at all been adversely affected during the last several weeks. Also to be highlighted in our upcoming Weekly Dry Bulk Report is that China’s reliance on thermal coal has continued to grow this year. So far this year, coal-derived electricity generation has contributed to 72.1% of China’s total electricity output. During the same period last year, it contributed to 71.3% of total electricity output.
Source: Commodore Research & Consultancy