Changes in the average exchange rate between the U.S. dollar and yen as well as the average bunker oil price during the first half of the current and previous fiscal years are shown in the following tables.

Liner Trade
In the container shipping division, Ocean Network Express Pte. Ltd. (ONE), which is an equity method affiliate, maintained steady overall liftings and utilization, and the liftings particularly increased on the major North America and Europe trades, as well as Intra-Asia trade. On the other hand, although freight rates in the North America trade were unchanged compared to the previous fiscal year, in the Europe trade, due to deterioration in the supply and demand balance, freight rates did not rise during the summer peak season and were sluggish during the quarter, but with the aim of improving profitability, synergistic effects of the business integration were further accumulated and improvement measures such as optimizing the cargo portfolio continued to be executed. Also, in the previous fiscal year, large one-time costs were incurred following the teething problems that occurred immediately after the start of service and the termination of the container shipping business at NYK Line. However, these costs have not occurred in the year to date through the second quarter of the consolidated fiscal year, and as a result, the bottom line greatly improved. Although the total handling volume at terminals in Japan increased, the total handling volume at overseas terminals declined due to the impact of the sale of the equity share in the stevedoring subsidiary located in North America in the previous fiscal year.

As a result of the above, although revenue declined year on year in the Liner Trade as a whole, the business performance greatly improved, and a profit was recorded.

Air Cargo Transportation
In the Air Cargo Transportation segment, measures were implemented in line with the improvement plan for the improper handling of maintenance conducted in the past by the consolidated subsidiary Nippon Cargo Airlines Co., Ltd. The aircraft were all returned to service by the end of the previous fiscal year, and chargeable weight increased year on year. However, as the result of lower demand due to the impact of mainly the trade problem between the US and China, the freight rate and load factor fell, and a loss was recorded.

Logistics
In the air forwarding business, demand was slow in Japan and Asia, and handling volumes fell. In the ocean freight forwarding business, due to the agile marketing the cargo portfolio has been reviewed, but handling volumes dropped significantly in relation to the trade problem between the US and China. In the logistics business, the results were generally strong, including progress in the initiatives aimed at improving profitability in Europe. In the coastal transportation business, although the handling volume increased due in part to the establishment of new services, the increased costs resulting from new investments pressured the bottom line.
As a result of the above, the overall Logistics segment recorded lower profit on lower revenue year on year. 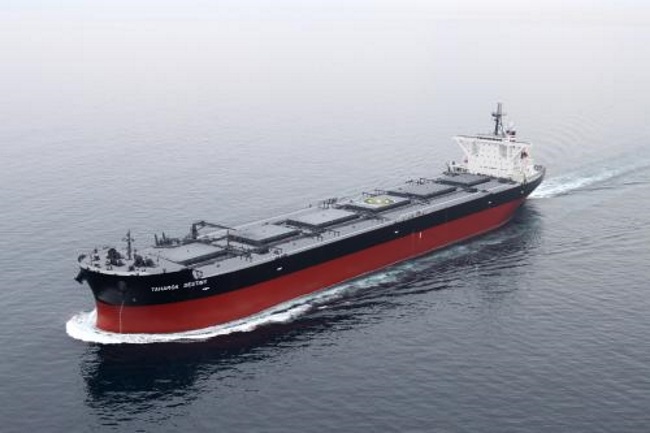 Bulk Shipping
In the car transportation division, shipping traffic was strong to North America and within Asia. Also, operations were rationalized mainly in trilateral transport, resulting in increased transportation efficiency. In the auto logistics segment, activities were conducted with the aim of both strengthening the business base and expanding the business, including new logistics proposals through collaborations utilizing the group network.

In the dry bulk division, although more new ships were commissioned than the number of ships scrapped, as a result of increased dry dockings primarily of Capesize bulk carriers in preparation for the environmental regulations set to take effect from January 2020, the supply and demand balance tightened and the market improved. Cargo volumes of iron ore are recovering from the supply disruptions that occurred in Brazil and Western Australia at the end of the previous fiscal year. In addition, cargo volumes of coal and grain were firm. However, the effects of the market improvement were limited by the efforts made to fix revenues using freight forward agreements (FFA) concluded in order to control the changes to freight and charter rates from market fluctuations. Also, due to differences in the timing at which the revenue and expenditures are recorded, a loss has been recorded in the second quarter for the FFA transactions concluded for market fluctuations from the second half. However, there is no impact on the full-year business forecast. Under this environment, along with continuing to work to secure long-term contracts, cost reduction initiatives such as thoroughly conducting efficient navigation were implemented, and efforts were made to improve the bottom line, including the reduction of ballast voyages through innovations to the cargo combinations and ship deployments. In addition, progress was made in returning the high cost chartered ships early.

In the energy division, the risk of deploying ships to the Middle East was actualized for VLCC (very large crude carriers) following the attacks on tankers near the Strait of Hormuz in May and June and the drone attack on Saudi Arabian oil facilities in September, and the market levels rose. In petrochemical tankers, shipping traffic became more active. In LPG carriers, in addition to more active shipping volumes from the US to Asia, the ton-miles increased due to changes in the trade pattern resulting from the trade problem between the US and China, and market levels were pushed much higher. In LNG carriers, the bottom line was firm based on support from the long-term contracts that generate stable earnings. In the offshore business, FPSO (floating production, storage and offloading) vessels and drill ships were steady. As a result of the above, the overall Bulk Shipping segment recorded lower profit on lower revenue year on year.

Real Estate and Other Businesses
The Real Estate segment was steady, and both revenue and recurring profit were generally unchanged year on year. Also, the gain on the sale of owned property was recorded as extraordinary income. In the Other Business Services segment, although several of the businesses including the bunkering business and marine equipment sales were strong, mainly manufacturing and machining were slow due to a decline in orders. In the cruise business, the occupancy rates on cruises offered by the company were firm, and the Other Business Services segment overall recorded higher profits year on year. In regards to revenue, due to the impact of the conversion of NYK CRUISES CO., LTD. into an equity method affiliate, revenue declined year on year.

(2) Explanation of the Financial Position
①Status of Assets, Liabilities and Equity
As of the end of the second quarter of the current consolidated accounting period, assets amounted to ¥2,036.6 billion, an increase of ¥34.9 billion compared with the end of the previous consolidated fiscal year. Consolidated liabilities amounted to ¥1,531.6 billion, up ¥51.6 billion compared to the end of the previous consolidated fiscal year as a result of a ¥15.7 billion decrease in loans payable and an ¥87.3 billion increase in leases liabilities at the start of the year from the application of IFRS 16 at consolidated subsidiaries that have adopted the International Financial Reporting Standards (IFRS). Under consolidated equity, retained earnings increased by ¥1.7 billion, and shareholders’ equity, which is the aggregate of shareholders’ capital and accumulated other comprehensive income, amounted to ¥468.0 billion. This amount combined with the non-controlling interests of ¥37.0 billion brought total equity to ¥505.0 billion. Based on this result, the debtto-equity ratio (D/E ratio) came to 2.40.

②Cash flow
Cash flow from operating activities through the second quarter of the current consolidated accounting period was ¥47.5 billion as a result of the profit before income taxes of ¥19.6 billion, non-cash depreciation and amortization of ¥51.0 billion and interest expenses paid of ¥13.7 billion. Cash flow from investing activities was an outflow of ¥47.6 billion due to the acquisition and sale of non-current assets, mainly vessels. Cashflow from financing activities was an outflow of ¥1.3 billion mainly due to the net changes in long-term and short-term loans, including loans from multiple commitment lines (total remaining unused balance as of the end of the quarter was about ¥210.0 billion) for the purpose of securing liquidity. As a result of these factors, the balance of cash and cash equivalents after taking into consideration the exchange rate differences at the end of the second quarter was ¥72.9 billion, down ¥5.3 billion from the beginning of the fiscal year.

Concerning the future outlook, in the Liner Trade segment, although ONE has revised the short-term freight rate assumptions in light of concern over a global slowdown, the cargo handling volumes at the terminals in Japan are expected to remain strong. In the Air Cargo Transportation segment, the situation is expected to remain challenging due to lower transportation demand against the backdrop of the trade problem between the US and China. Similarly, in the Logistics segment, the cargo handling volumes in both the air freight forwarding business and ocean freight forwarding business are expected to fall. In the car transportation division, continued efforts are being made to increase ship deployment efficiency mainly in trilateral transport. In the energy division, the market has soared following tightened supply and demand of capacity due to US government sanctions on Chinese tanker companies and the avoidance of the tankers that has called at Venezuelan ports by oil companies. As a result of this, it has become more difficult to forecast the long-term market, but given the impact of the response to the environmental regulations and the peak demand season in the second half, the VLCC and petrochemical tanker markets are expected to trend at relatively high levels. In the dry bulk division, too, the supply and demand balance will tighten following the response to the environmental regulations, and the market is expected to be firm. Also, a certain amount of fleeting costs is expected to be incurred in relation to the changeover to regulatory compliant fuel (low sulfur fuel) in response to the environmental regulations.

Based on the above, the Company has revised its forecast of full-year consolidated financial results, as follows.

② Dividends for the Fiscal Year ending March 31, 2020 NYK Line has designated the stable return of profits to shareholders as one of the most important management priorities, and generally targeting a consolidated dividend payout ratio of 25%, the distribution of profits is decided after comprehensively taking into account the business forecast and other factors. At the same time, based on an ongoing minimum dividend that is not affected by the business results, an annual dividend of ¥20 per share has been set as the minimum dividend. In accordance with this policy, the planned interim dividend for the current fiscal year of ¥20 per share will be issued. In addition, including the expected year-end dividend of ¥20 per share, there is no change in the plan to issue a full-year dividend of ¥40 per share.